There have been days during Melbourne’s lockdown that Catherine Devine let her six-year-old water-loving son, Joshua, have half-a-dozen baths, just to keep him entertained.

Born without a thumb and large hole in his heart, and diagnosed recently with autism, Josh is in prep this year at St Paul's College in Balwyn, a school for children with special needs.

When schools closed, Ms Devine found herself trying to help Joshua and her son, Lachlan, 8, with schoolwork, look after four-year-old son Benjamin, and chip away at her part-time marketing job remotely while husband Michael worked from the office. 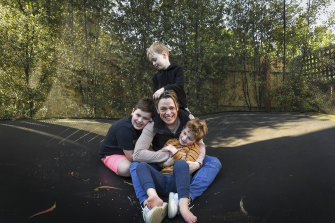 “The biggest issue was Josh,” says Ms Devine. “He loves water and spending time in the bath, so there were times when we did whatever was needed to get through the day.”

Joshua's school closed both during the first lockdown and the second because of the number of vulnerable children. Lachlan's state school was closed in line with government guidelines and Ben's kindergarten was also closed.'

Like many exhausted parents, Ms Devine is delighted that on-campus primary school classes will be resuming. “There have definitely been low points: you’re shorter with the kids because you’re frustrated and tired and don’t get a break.”

The state government confirmed on Sunday that Victorian primary school-aged children would return to on-site learning from October 12, citing new research which showed kids aged under 10 were less infectious than older children.

“Families where they’ve got children of care and primary age, it will be significant news for them and music to their ears.”

Ms McHardy said not including all high school students in the return to school from October 12 was likely though to disappoint many teenagers.

“The [coronavirus] numbers are reducing quite significantly, that's a big sign of hope,” she said.

“Fingers and toes crossed there are some more positive messages to come.”

“We have advocated strongly to the government that all students should return to on-site learning as soon as it is safe to do so,” Ms Green said.

“Independent schools, their students and families have risen to the extraordinary challenges of learning at home, but we know the best educational and wellbeing outcomes for students come from attending their schools.

“Our hope is that the improved case numbers will also see an earlier return to on-site learning for students in years 7-10.”

Modelling, released by the Andrews government on Sunday alongside its decision to send primary school-aged children back to the classroom, showed the risk associated with reopening schools was likely lower than previously estimated.

Researchers also found when young children had been infected and gone to school in Victoria, outbreaks were “very uncommon”.

Although 373 Victorian students and 139 staff have been infected with COVID-19, schools were more likely to be a multiplier of existing community transmission rather than a driver of the epidemic.

“Allowing all primary students to return to on-site learning in term four is unlikely to change the trajectory of case numbers significantly by Christmas,” the report said.

The risks related to household transmission and increased movement, including by adults during pick-up and drop-off.

At the end of July, unions representing Victoria's public and independent school teachers asked the state government to grant schools the power to make their own decisions on remote learning, saying the lives of teachers were being needlessly put at risk. It came as close to 80 Victorian schools were forced to close after being linked to coronavirus cases.

She said the safety of both staff and students though, remained paramount.

“The fact that schools will have the flexibility to bring students back in a way that suits them and their circumstances is important. No two schools are the same and staff know what will work for them and their communities,” Ms Peace said.

Australian Principals Federation president Julie Podbury said the teachers she had spoken to had all expressed satisfaction in Sunday's decision. “Some were surprised that there wasn’t an earlier return particularly for the juniors but none-the-less happy,” she said.

Ms Devine said there were positives during lockdown: she’s had a chance to see what her children are learning first-hand, and appreciated the break from taking Joshua to his many weekly therapy sessions.

Her parents have helped by taking Josh once a week (arranged officially through his GP), and his support worker has also been able to visit so Ms Devine could spend time with her other children.

“I know that going back to school will be amazing but I also feel a bit emotional, it’s bittersweet,” she said. “I think I’m going to miss them.”