Zac Efron ‘roughed it’ in Papua New Guinea for 2 weeks

Jimmy Kimmel Live brought Efron onto the show to talk about what he’s been up to since his High School Musical days. He talked about his time working in Australia, but he didn’t end his travels there. Efron explained that he traveled over to Papua New Guinea and was surprised by how difficult it was to get into the country.

Host Jimmy Kimmel asked the actor how the tribe worshipped the crocodiles with a fascinating story.

“Very interesting way,” Efron responded. “So, we went out to this river where they’d go fishing or hunting to meet these crocodiles. They invited me along for the trip, so I was like, ‘Yeah, sure, let’s go. I’d love to check this out. This is going to be wild.’”

Efron continued: “A huge group of 40 or 50 dudes all got down in this swamp area and laid down and sort of starfished out like below the water. Just their heads out … They all kind of laid out and what I realized after a couple minutes, we’re feeling around with their hands for crocodiles.”

“Every time one would swim by and touch one of their hands or feet or anything like that, they would like whistle or yell in order to cue the one next to them to whistle or yell like, “Hey, he’s coming your direction,’” Efron recalled. “Eventually, these guys just laid down the river and they caught a crocodile. It was wild. They jumped on it, wrapped it up, pulled the thing in.” 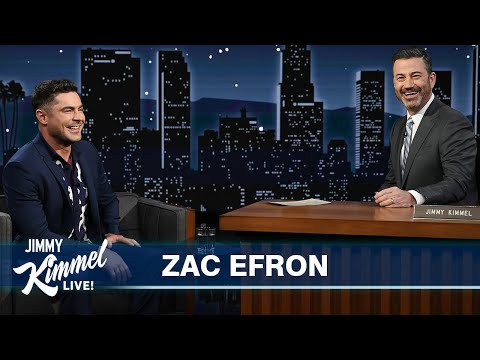 Kimmel asked Efron if anybody in Papua New Guinea knew about his work, such as High School Musical. The actor had a funny story about how their relationship changed over the course of his stay there, but it also extended to the world outside of the country.

“I think by the end of that trip, I kind of realized [it],” Efron said. “I was out there camping, I didn’t have a cell phone. We were off the grid. In Papa New Guinea, there’s no technology. We were sleeping in one of the little huts they sort of had for us. That was for me and a lot of buddies. We were roughing it, for sure.”

Efron continued: “By the end of the trip, which was two weeks out in Papua New Guinea, it was actually pretty funny. A couple of the guys came up to me with cell phones, these are the tribesmen guys. We FaceTimed their cousins and their wives and people that were living in other places all over the world.”

“They knew who I was the whole time and didn’t say anything about it,” Efron stated. “It was pretty wild. I was like, ‘Wow, OK. I’ve made it everywhere.’”

High School Musical was an instant phenomenon around the world for Efron, which went even further than he ever knew.

High School Musical star Efron told ExtraTV that he wants to jump into the Marvel Cinematic Universe. It’s one of the biggest movie franchises of all time, so many actors want to be a part of it. However, the MCU’s casting is always very careful and takes quite some time to announce their stars.

Some of Efron’s fans already tried to guess who he could potentially play, including the Fantastic Four’s Human Torch. Only time will tell if he will enter the MCU, but his lips will likely remain sealed unless Marvel makes an official casting announcement.