In this round-up, our reviewers look at a handful of movies released this week, from Hollywood blockbusters to foreign, local and sometimes obscure films that deserve some of the spotlight. Which ones are worth the cost of a ticket?

This South Korean black comedy-drama was directed by Bong Joon-ho and has been met with critical acclaim, landing a 98 per cent approval rating on Rotten Tomatoes. It won the coveted Palme d'Or at Cannes in May and was named best film at the Sydney Film Festival this month.

About an unemployed dad and his struggling family, the story takes a number of twists and turns as the family members find themselves surreptitiously working for the wealthy Park family – which is all fun and games until someone (or a few people) gets hurt.

"A worthy winner of the Palme d'Or at this year's Cannes film festival, the inspired Parasite can’t precisely be labelled a comedy, a thriller, nor a socially conscious drama about the class divide in South Korea, although it contains elements of all three. 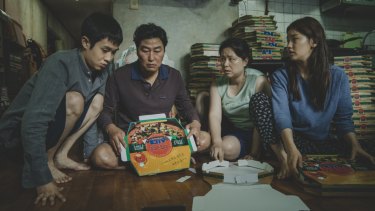 A poor family must rely on its wits to escape a smelly basement flat in Parasite.

"At a pinch, you might call it a satiric fable, or a tall tale: it also resembles a laboratory experiment, following a given set of postulates through to the bitter end.

"The film is a companion piece to director Bong Joon-ho's 2006 smash hit The Host (host and parasite, get it?), which saw a similarly down-and-out family battling a monster from the deep. This time, however, the Kim family is the monster – a four-headed beast that operates as a single entity and shows little mercy to outsiders.

"As always, Bong’s formal choices are close to impeccable: he’s the master of making an image feel sinister by holding it a beat too long, or using lateral tracking shots to suggest how his characters are propelled by drives rather than by psychology in any usual sense. 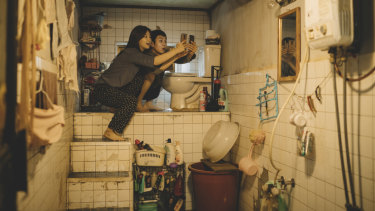 "That he never shirks his responsibilities as an entertainer is part of what makes his work so disquieting: we are drawn into the story without being guaranteed a happy ending, or even a moderately consoling one. But while he may be a cynic, he’s no misanthrope, nor is he lacking in warmth.

"At least, there’s no doubt that he likes the Kims – which is precisely why he has so few qualms about showing them at their worst."

It's a fun premise: a man wakes up after a global blackout and he's the only person in the world who knows The Beatles' music. He proceeds to pass their most famous songs off as his own, becoming a superstar in the process. As you can imagine, drama – of the relatonship and "all will be revealed" type – ensues. Himesh Patel, Lily James, Ed Sheeran and Kate McKinnon all star, Danny Boyle directs and rom-com king Richard Curtis is behind the screenplay.

"Yesterday also looked as if it could be a single gimmick movie. And what an unlikely gimmick. A freakish wrinkle in time leaves the human race with a collective case of selective amnesia.

"All memory of Coca-Cola and the cigarette have been erased, and in the debit column, the Beatles and their music have gone, too. It seems that the only person in the world who remembers them is Jack Malik (Himesh Patel), a so-so singer-songwriter from Lowestoft in Suffolk, who was unconscious after a bike accident when the cosmic glitch occurred.

"Don't look for logic or consistency in this scenario because there isn't any. Boyle has often co-opted the fantastic in his movies but he usually takes care to plug the larger holes in their premises. In this case, he hasn't bothered, reassured, perhaps, by the knowledge that Curtis' comic style has always maintained a distinctly laissez fair relationship to realism. 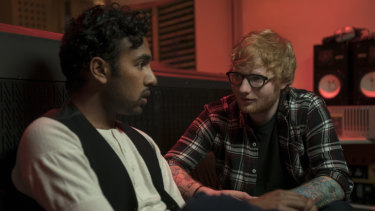 Himesh Patel, left, and Ed Sheeran in a scene from Yesterday.Credit:AP

"Jack discovers what has happened when he's sitting strumming his guitar with his best pals. Friendship is a Curtis speciality. All his films come well-stocked with a chorus of friends who can be relied upon to provide a commentary on the hero or heroine's foibles, and this lot are fairly typical. When he launches into Yesterday, he finds them reacting with a heartfelt admiration that's entirely new. In the past, their appreciation has been loyal verging on dutiful. Not this time.

"There's a tricksy fantasy sequence that doesn't come off, pushing the script's central conceit one step too far. But the ending is so richly infused with Curtis's brand of good cheer that you're more than likely to go home happy."

Fans of the The Conjuring Universe will be relatively pleased with this one: a sequel to 2014's Annabelle and its prequel in 2017, and the seventh instalment in the aforementioned universe, this storyline isn't the best but it's got a few jump-scares to give a kickstart to the heart. The Conjuring's Vera Farmiga and Patrick Wilson appear in the film too, giving it a bit of casting cred.

"Is it scary? That may depend on how often you’ve seen it all before, though in the absence of gore or a significant body count, it’s unclear just how much summoning up scares is really the goal. 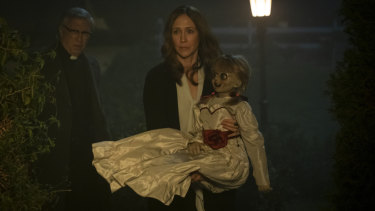 "With the series template so firmly established, the key precedents now seem less cinematic than televisual, especially early 2000s TV shows such as Medium or The Ghost Whisperer, which fused elements of soap opera and investigative procedural within a supernatural framework.

"In this context, wrestling with otherworldly forces appears a matter of cosy routine, with nothing likely to happen which would change the game once and for all.

"Annabelle Comes Home is built less to disturb than to reassure and yet hints of disturbance remain, enough to indicate why reassurance might be necessary. However uninspired the filmmaking, it can’t totally negate the ambiguous power of the premise: the idea of a child’s plaything as an emblem of evil, or of a clean-cut, kindly couple who keep dark secrets locked away."