Major Michael Stanley, 80, built the small boat out of corrugated iron and will be sailing along the Chichester canal to raise money for St Wilfrid’s hospice in Bosham. He had aimed to raise £1,000 but he quickly surpassed the target. Speaking on This Morning, Major Michael was not impressed when Eamonn Holmes questioned if it would stay afloat or if it could sink.

The Tintanic is made out of two sheets of corrugate wrong, which have been stuck together, and is inspired by tin boats Major Michael saw on a recent trip to India.

While he appeared to be rowing without any issue while chatting to Ruth Langsford and husband Eamonn, there were questions over whether it would last the whole 100 miles.

Eamonn remarked: “I’m just looking at the tilt, or the lilt, on your boat there, the Tintanic.

“What are the chances of it sinking there?” 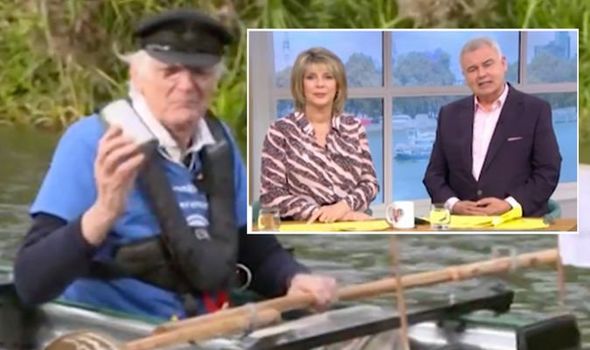 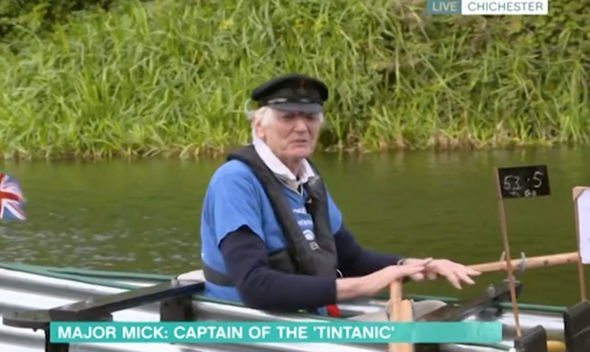 “That’s a very hurtful comment,” Major Michael hit back at the This Morning host.

“No, not at all. I have to admit it does leak a little bit but I have a trusty baked bean tin here that i take the water out with.

“But yes, I get on quite well on the whole. On the one and a half miles to Chichester, maybe I have to bail about a couple of pints of water out when I get there.”

While the boat is yet to sink, Major Michael revealed he did have to add two floats to the boat to ensure he didn’t fall out. 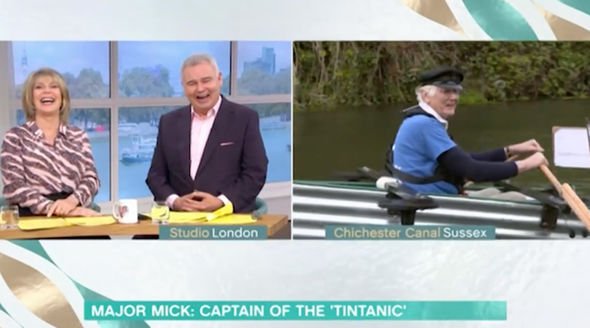 “I’ve tipped in twice from before I put the floats on, that was in the sea, and I lost my first phone that way,” he recalled.

“It is reasonably stable, it’s not always stable when I get in, that’s the difficult part.

“I know when everyone takes photographs, my friends are always hoping I fall in. I haven’t satisfied their desire yet.”

Major Michael will celebrate his 50th wedding anniversary during his challenge but he’s yet to decide if he will row that day.

“Well, I’m not quite sure yet,” he explained. “I’m supposed to be rowing on that day but I’m not sure what my wife will say.

“I will have to think about it. I’m very privileged to have been married for so long, we were married in Singapore when I was serving there in a little Christian Church.

“It was a great day and to think back it was 50 years ago is quite something.”

Major Michael joked that as he served in the army, he isn’t as secure on the water.

“The army walks on the land and I feel very precarious here on the water,” he detailed.

“It’s an experience and I’m really enjoying it. A lot of us are all depressed and changed our lives.”

Major Michael said he is simply trying to “boost morale”.

This Morning airs weekdays on ITV at 10am.

Sally Dynevor talks Coronation Street U-turn during pandemic ‘We lost that dimension’
Recent Posts
World News
We and our partners use cookies on this site to improve our service, perform analytics, personalize advertising, measure advertising performance, and remember website preferences.Ok