This Morning returned today with Rochelle Humes and Dermot O’Leary and from the beginning of the show it became clear they had something big planned for competition host Josie Gibson. Yesterday, the star was seen on a Norfolk beach, but today she was in North Wales to have a go on a zip-wire that would take her from the top to the very bottom of a Welsh mountain.

Not even Rochelle and Dermot understood the magnitude of Josie’s task today.

But, when Rochelle pointed out just where the start of the zip-wire was, Josie was visibly distressed.

They returned to Josie later in the show lying flat in the carrier attached to the zip-wire.

“Everyone, just check on me again, I am precious cargo,” Josie screamed at the men taking care of her. 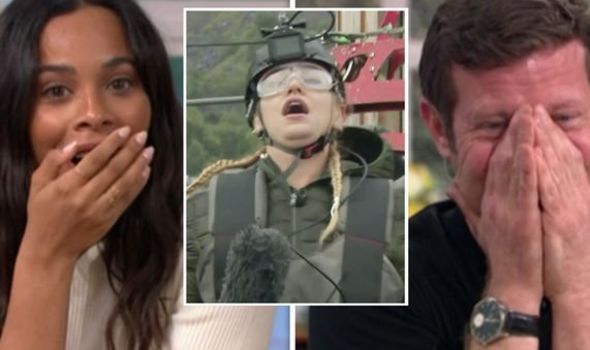 Josie had a camera attached to her helmet so viewers could see every emotion the host was feeling.

“I don’t want to do it,” Josie uttered looking around.

Rochelle in the studio looked to her directed and asked: “Is she doing it?”

But, before Josie could blink, the instructors were counting down to letting her go. 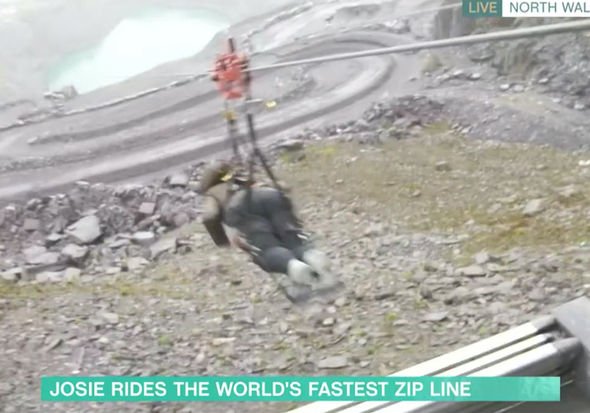 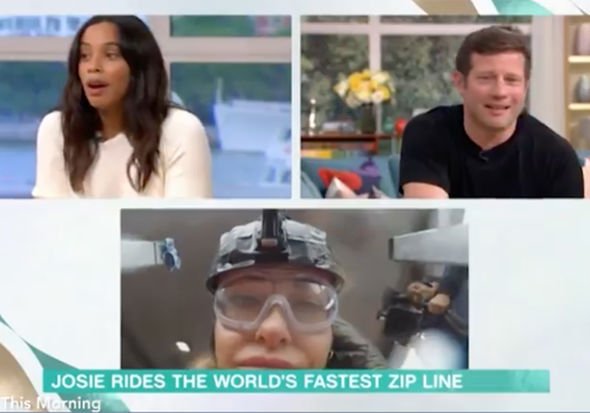 Josie screamed the entire time and it took her a full minute to get from the top to the bottom.

But, when she reached the end she was shaken and said she wouldn’t do these challenges anymore.

She quickly scrambled to get her feet back on the ground as someone helped her.

“I am shaking, my whole body is white, guys thank you so much for making me do that,” she joked.

Rochelle chipped in: “Josie you are my hero.”

“What an experience, I’m alive,” Josie said with her voice shaking. 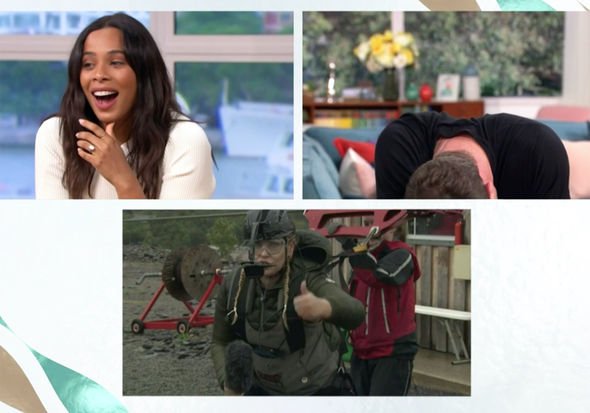 Rochelle and Dermot joked that she loved it once she had finished.

“I’m so happy feet are on the ground, I am shaking like a leaf, what a rush.”

Dermot asked Josie what the best bit of the experience was.

Rochelle coyly added: “That was full-on, I wasn’t expecting that!”

“Love you guys, all for the team, but no more now, no more,” Josie stated.

Rochelle concluded: “It was all a bit of a laugh and I didn’t think it was going to happen for a second.”

Later on in the show, Rochelle and Dermot crossed over to Josie to check up on her, and she explained: “I’m fine! I’ve had a cup of tea and the adrenaline has worn off.”

She then confessed she couldn’t remember speaking to the This Morning presenters because of the high she was experiencing.

“Do you know what?” Rochelle said. “You looked so scared and I got a little bit worried!”

Fans were just as tickled as the hosts were today.

One fan tweeted: “The best thing I’ve seen in a while! @Josiestweet you’re a legend #ThisMorning

“@Josiestweet you are a star.  #thismorning gold #zipwire fun!!” added another.

A third said: “I don’t usually get to watch @thismorning but I just absolutely wet myself watching a woman scream through a minute long zip line  poor lass! Absolute tv gold though! #ThisMorning Also I totally want to go do that!!!”

Another added: “Oh Josie! Well done! Better  you than me! I can’t stop laughing though! OMG That’s epic!!#ThisMorning.”

And one more wrote: “The poor girl said she didn’t want to do it #josiegibson #ThisMorning“

This Morning airs on ITV weekdays at 10am.