Every week after This Is Us, fans take to social media to discuss their favorite and least-favorite scenes from the episode. After the “So Long, Marianne,” installment, fans are in turmoil over one particular thing. There is an avocado ordeal between Kate Pearson (Chrissy Metz) and Toby Damon (Chris Sullivan) that may lead to the couple’s demise. Let’s take a look at what happened and who is in the right here—Kate or Toby? 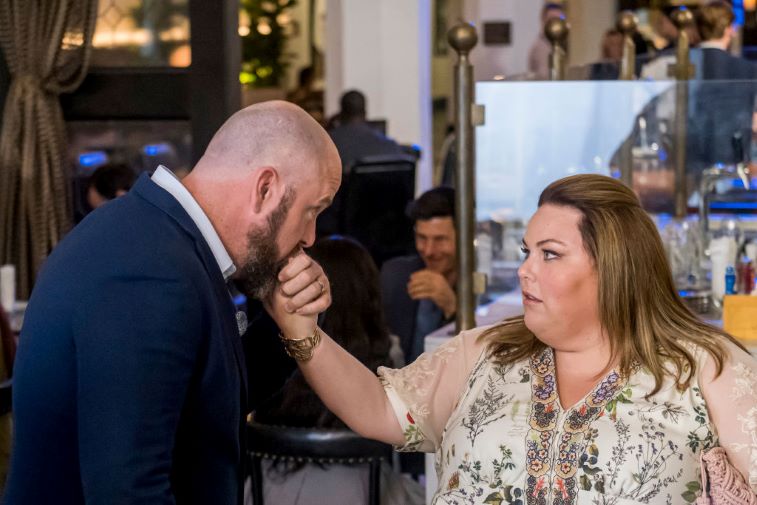 What happened on ‘This Is Us’ that fans are calling ‘Avocado Gate’?

On the Nov. 12 episode of This Is Us, Toby asks Kate to wait for him to get home before feeding their son, 6-month-old Jack solid foods. The baby was not eating any solid foods up to this point, so Toby was determined to help Kate work on this milestone with him.

While Toby is at Crossfit, Kate takes baby Jack over to the neighbor’s house for their daily walk. Gregory (Timothy Omundson) invites Kate in and asks her to cut up an avocado. He then feeds it to the baby, who shockingly loves it! Kate is thrilled that Jack is eating solid food but then realizes how upset Toby will be when he finds out.

Next, Toby comes home with an array of foods for Jack. He tries the avocado first and is excited to see Jack eat it. Kate chooses at the time to not spoil his happiness by telling him that he was not the first one to feed him.

In the next episode, on Nov. 19, Kate finally comes clean about the avocado when Toby is making a huge fuss over how many likes his avocado video of baby Jack is getting. Toby is appalled at this revelation. He does not understand how she could have lied to him for the past 24 hours. He is still upset when they arrive at Randall (Sterling K. Brown) and Beth’s (Susan Kelechi Watson) home for Thanksgiving dinner.

Fans debate: Should Kate have told Toby about the previous avocado feeding?

Fans are torn over whether she should have told him at all, not to mention the disagreement over whether or not Toby has the right to be mad about the situation.

“I think they’re both in the wrong,” wrote one Reddit user. “Kate shouldn’t have lied, but Toby can’t expect the kid to wait for him to be home for everything.”

“Kate didn’t tell him right away, but she told him a day later,” added another fan. “And he’s right that there will be lots of firsts, but Toby getting all upset was too far. She didn’t want to break a new dad’s heart when he’s experiencing a first, and I wouldn’t say she sat on the lie. I wouldn’t even call it a whole lie, maybe a white lie.”

“Maybe Kate shouldn’t have kept that from Toby,” surmised another Redditor, “but I don’t think it was so terrible to let him think it was Jack’s first solid food. They’re both blowing the issue way out of proportion, in my opinion.”

“She should never have told him,” countered one fan. “He was so genuinely happy with what he thought was baby Jack’s first solid food. She should have let it lie.”

It sounds like fans are mostly in agreement that Kate could have left well enough alone. It wasn’t going to hurt Toby to keep the avocado at the neighbor’s house a secret. Additionally, viewers agree that the whole thing was something silly to fight over.

Could this be the beginning of the end for Toby and Kate on ‘This Is Us’?

If Toby and Kate cannot get through something simple like baby Jack’s first solid foods, how are they going to make their marriage work? Fans are concerned about their future relationship.

This one really gets me? @nbcthisisus

“He was so freaking happy!” wrote a concerned fan. “She didn’t wanna ruin it. And then she felt bad for lying. At least she did the halfway good thing and told him eventually. In a relationship, you need to be able to have a discussion about difficult things (which is also why she should have told him anyway). Either way, they’re both being babies. Kate is being whiney and stressed, and Toby is being a pretentious baby.”

It was a bit selfish of him,” added another Reddit user, “to have her stop trying to feed the baby while he went to do something else. Hungry babies don’t care who sees their first anything, and should just be fed, whether the camera is rolling or not.”

Fans observe that Kate and Toby have some serious relationship issues to work out. Unless they can begin to talk things out, viewers are afraid this may be a starting point for a future divorce. You can find out more when This Is Us returns to ABC on Jan. 14, 2020.