Humbly listed at the bottom of recent press release, Hulu revealed a rather startling viewership statistic. In the last year, more than half of Hulu subscribers had watched at least one of its adult animated programs. Further still, nearly 40 percent watch some form of adult animation every month. Based on reported figures, that’s roughly 12 million people regularly seeking out Hulu’s acquired and original animated series.

It’s no wonder the Disney-controlled streamer has invested in making more of its own animated programs, including “Solar Opposites” (the main focus of the press release), which became the No. 1 title on Hulu (animated or otherwise) during its premiere week in May. There’s a growing demand for adult animated content, and Hulu is in a prime position to capitalize. Why? A bulk of Hulu’s high-profile animated content comes from Fox, one of the streamer’s sister networks and a long-standing adult animation hub — that’s showing no signs of turning off the taps.

Fox knows a thing or two about animation. “The Simpsons” became a cultural juggernaut in the 1990s, snagging big ratings while making bigger licensing bucks and hauling in awards to boot. Fox sporadically paired its tentpole animated comedy with new animated offerings, including “The Critic” in 1995 and “The PJs” in 1999, but the network didn’t form a brand name around animation until “King of the Hill” and “Futurama” took off shortly before the new millennium.

In 2005, Fox went all in, launching its first “Animation Domination” lineup with “The Simpsons,” “King of the Hill,” “Family Guy,” and “American Dad.” By then, the initial three programs were well-established and helped draw viewers to Seth MacFarlane’s new show — a strategy Fox has since repeated for more than a decade. The network has rotated in new series like “Sit Down, Shut Up,” “The Cleveland Show,” “Napoleon Dynamite,” and other short-lived animated titles while searching for lasting staples to pair with juggernauts like “The Simpsons,” “Family Guy,” and later on, “Bob’s Burgers.”

Now, 11 of the 13 series that once aired as part of Animation Domination are now available to stream on Hulu. That’s right: Hulu has recreated years of Animation Domination lineups, including long-running Fox titles like “King of the Hill” and “American Dad” (which now airs new episodes on TBS), as well as short-lived entries like “Napoleon Dynamite.” Hulu even snapped up “High School USA!” and “Axe Cop,” which debuted their first episodes tied to Animation Domination before branching off elsewhere. All of these are in addition to the readily available still-airing titles, “The Simpsons,” “Family Guy,” “Bob’s Burgers,” and freshman series “Bless the Harts” and “Duncanville.”

The current series’ prevalence on Hulu is in line with another long-running trend in TV: vertical integration. Today’s Animation Domination lineup exclusively consists of series produced by 20th Century Fox Television, which is now a subsidiary of Disney, which has a controlling share of Hulu. “Family Guy,” “Bob’s Burgers,” “Bless the Harts,” and “Duncanville” are all produced in part by 20th Century Fox Television, so it makes sense that they’re all streaming on Hulu. Even “The Simpsons,” which was a centerpiece in launching Disney+, features its newest episodes (Season 31) on Hulu. 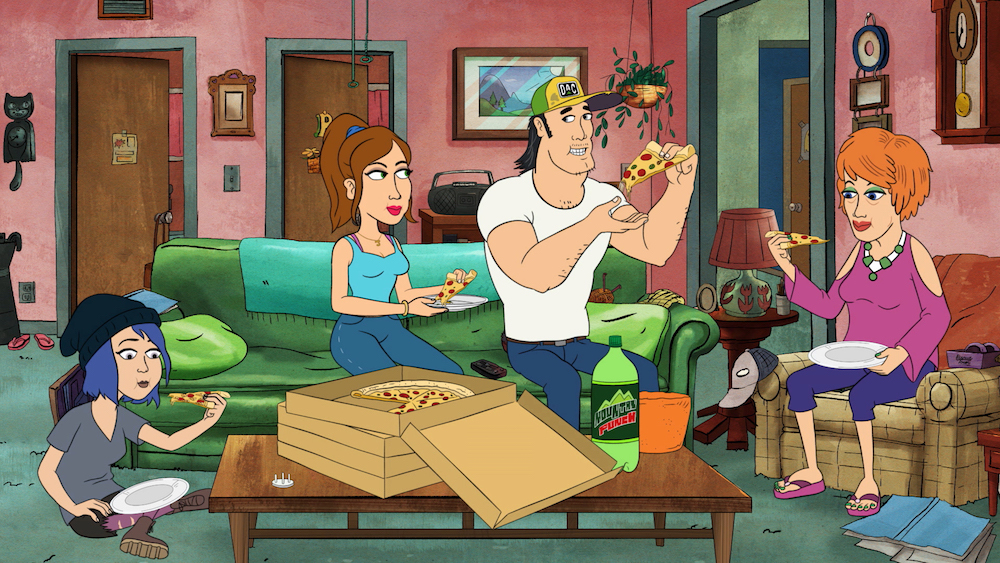 The emphasis on animation is serving both the network and the streamer well, with the wide reach of Fox broadcast and anytime availability of Hulu forming a solid one-two punch to encourage viewership. Both “Duncanville” and “Bless the Harts” landed renewals, and “The Simpsons” was renewed for two seasons in 2019 — the same year it won its 11th Emmy for Best Animated Program. “Family Guy” snagged its 19th season a few months ago, and “Bob’s Burgers” not only has another season coming, but there’s a movie dated for April 2021. Throw in a reminder that the three of these shows produced more than one-quarter of Fox’s 2019 Emmy nominees, and there’s no reason to think they’ll disappear anytime soon. (Even if Fox did bow out for whatever reason, Hulu could order new seasons directly to its service.)

But Fox, the network, continues to invest in animation, as well. Not only have all of last year’s animation titles been renewed at Fox, but the network picked up “The Great North” for a second season ahead of its midseason premiere, ordered “Housebroken” to debut along with it, and Fox Entertainment — the production arm of the Fox network — signed “Rick and Morty” creator Dan Harmon to an overall deal which includes a series commitment to an adult animated series scheduled for 2022.

But it’s here where the future of Fox animation still looks a little too familiar. Many of its shows — especially the successful ones — followed a narrative template similar to Matt Groening’s landmark venture, leading to copycat claims from not only critics, but within the shows themselves. “Family Guy,” “King of the Hill,” and “Bob’s Burgers” all focus on lower-middle class families led by an everyman patriarch. Each employs an episodic structure, each ventures into adult themes, and each is very, very white.

Cloning “The Simpsons” as closely as possible has formed an animation block that’s severely lacking in racial diversity. The Simpson, Belcher, Griffin, Harris, and Hart families are all white, as are all their creators. Inclusion has been a noted problem across animation for quite some time, whether its gender imbalance or whitewashing, and Fox’s animation block has only made meaningful strides with the former. “Duncanville” and “Bless the Harts” are both created by women, as are upcoming animated comedies “The Great North” and “Housebroken.”

That’s an important step in the right direction, but seeing more prominent people of color in front of and behind the camera is essential. With demand surging, adult animation needs to better reflect the world we’re living in; Fox and Hulu may be benefitting from a strategy that began in the ’90s, but after 30 years, some things do need to change.