For months, there have been rumors circulating that Scarlett Johansson was pregnant with her second child (she is a mom to a daughter named Rose with her ex-husband, Romain Dauriac). While she and husband Colin Jost did their absolute best to keep things a secret, several media outlets reported that Johansson was with child, a source telling Page Six, “Scarlett is actually due soon, I know she and Colin are thrilled,” back in July. Another source told the outlet, “Scarlett is pregnant but has been keeping it very quiet. She has been keeping a very low profile.” Rumors first started circulating in June when many people noticed that ScarJo wasn’t out and about promoting “Black Widow.” A the time, a source told Page Six that Johansson “hasn’t been doing many interviews or events to promote ‘Black Widow,’ which is surprising since it is a huge Marvel/Disney release and she is both the star and an executive producer.”

Flash forward to August 17, and Jost reportedly confirmed the news that he was going to be a dad. Jost made an appearance at the Ridgefield Playhouse in Connecticut over the weekend when he reportedly told the crowd at his stand-up comedy show that his wife was pregnant, according to Page Six. “We’re having a baby, it’s exciting,” he said, according to someone in the audience. On August 18, Jost took to Instagram to ask the public for privacy — and he shared some big news. Keep reading to find out what’s going on. 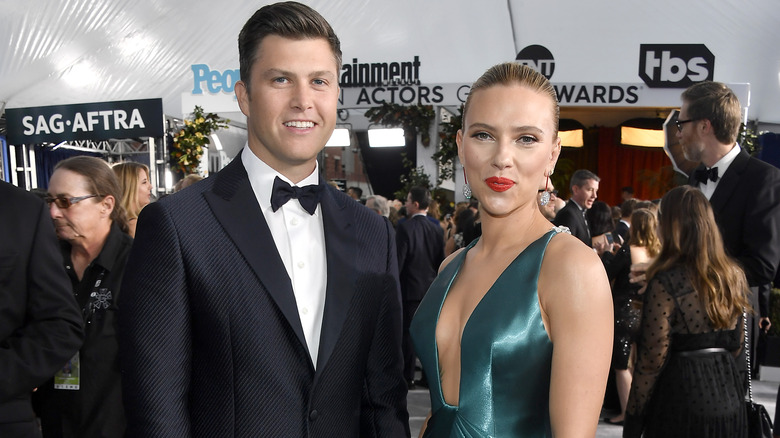 Colin Jost and Scarlett Johansson have welcomed their first child together! Jost made the official announcement on Instagram, just days after confirming that his wife was pregnant. “Ok, ok we had a baby,” Jost wrote. “His name is Cosmo. We love him very much,” he wrote, rounding out the first of two slides. “Privacy would be greatly appreciated,” he wrote in the second slide. The caption for Jost’s post was also entertaining, and consisted of three hashtags. “We got away with it for a long time,” read one hashtag. “No kids policy,” read another. “We’re going to Disney World,” was the third. Jost did not share any additional details about his son’s birth, nor did he share a photo of the baby.

Jost’s “no kids policy” hashtag supports the movement started by actors Kristen Bell and Dax Shepard. According to Huff Post, the No Kids Policy “was a call to action for not just publications, but also consumers. Earlier this year the couple rallied to get news outlets to stop sharing, buying or posting photos of celebrities’ children taken without consent.”