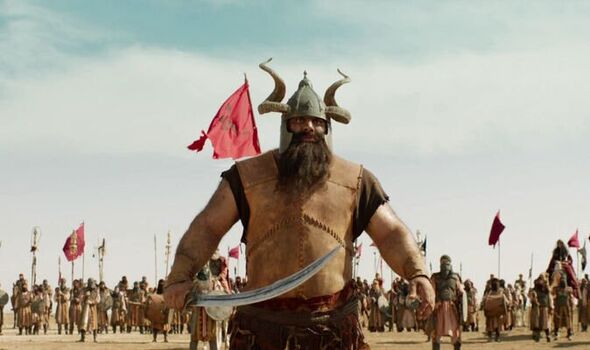 The film’s producer said the cave-in brought into question “British values” and said the mob had been empowered to “dictate” what can and cannot be shown on UK screens. Video captured outside Sheffield’s Cineworld showed the complex’s manager attempting to appease the angry crowd by talking through a megaphone while petrified staff reportedly cowered inside.

The footage shows members of the large crowd of men shouting phrases such as “Alluha Akbar” as the manager tries to appease them by stating: “We totally agree with what you are saying” whilst confirming the film will no longer be shown.

Hundreds of demonstrators also turned out in Bradford, Bolton and Birmingham to protest the movie which was released in around 30 UK cities over the Jubilee weekend at Cineworld and Vue complexes.

The film opens with the invasion of Iraq by ISIS and features a graphic jihadist murder, before documenting the life of Fatima, the daughter of the founder of Islam, during the seventh century.

Islamic tradition forbids the direct portrayal of religious figures and the film’s director Eli King depicts Fatima as a faceless character, shrouded by a black veil.

And other critics claim negative characters were portrayed by black actors, which they say “stems from the racial bias against darker-skinned people”.

One protester in Bradford said: “We are very offended. We have a right not to be insulted.”

“You have no right to tell us our history. We will not let this film go on further.”

A spokesman from the Muslim Council of Britain (MCB) called for “respectful dialogue” between protesters and the film supporters.

But London-based Malik Shlibak, the executive producer of The Lady of Heaven, called the decision to pull the film by cinemas bosses “unacceptable”.

He said: “I genuinely believe from all sides, from the cinema perhaps from the Muslim Council of Britain, that there is this succumbing and bowing down to these radical extremists and their demands.

“I think this is more than The Lady of Heaven as an individual film, this is about our British values and how much these mean to us.

“These groups have now been given the power to dictate what the British public can and cannot watch at their local cinemas.”

A spokesman from Cineworld confirmed the chain had cancelled all future showings.

They said: “Due to recent incidents related to screenings of The Lady of Heaven, we have made the decision to cancel upcoming screenings of the film nationwide to ensure the safety of our staff and customers.”

A spokesman from Vue Cinemas said film scheduling decisions were taken on a “site-by-site” basis, but confirmed that The Lady of Heaven was still on show at “a number” of their theatres.

They added: “Vue takes seriously the responsibilities that come with providing a platform for a wide variety of content and believes in showcasing films of interest to diverse communities across the UK.