Strictly Come Dancing will see Kelvin Fletcher, Karim Zeroual or Emma Barton lift the Glitterball Trophy tonight. So far, the grand finale has consisted of emotional Showdances, quick Quicksteps and jovial Jives. But the viewers, live audience and judges were not the only ones who were going wild as it seems the excitement overwhelmed host Claudia Winkleman when she made a blunder live on air.

While Tess Daly joins the couples on the dance floor for the feedback from the judges, Claudia is upstairs with all the professional dancers and the former celebrity contestants ready to welcome the couple for the scores.

Following an incredible show dance from Kelvin and Oti, they joined Claudia upstairs.

Claudia kicked off the quick chat with: “Kelvin, I mean Motsi [Mabuse] was in tears, up here it was like a rocket shot off! I mean, Oti, giving you a show dance is like literally just going ‘go for it baby.’”

Turning to Oti she said: “You didn’t keep it easy for him!” 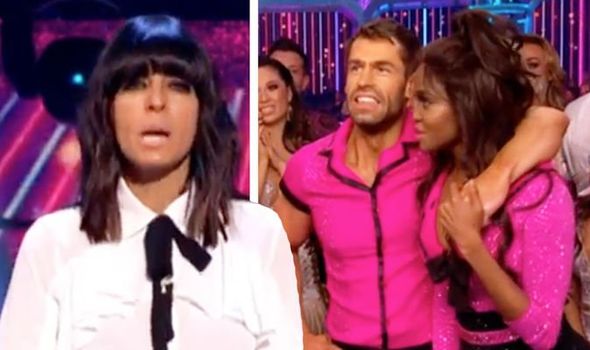 “No because this is the one opportunity to show how good he is – the show dance is about the celebrity and how good they’ve become. And so I used that opportunity  so show all the best bits!” Oti explained.

Turning back to Kelvin, Claudia added: “Your wife Liz is so proud, she’s in the audience tonight and you’re dad, Warren who’s become a bit of a star, was in tears.”

It was then time to find out the points they were going to be awarded by the judges.

“Let’s have a look at the leaderboard,” Claudia said down the camera. 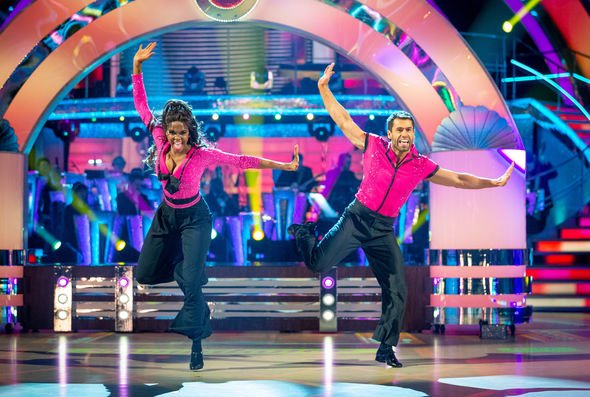 Oti then broke the silence and remarked: “The scores…”

“Oti thank goodness you’re here! The leaderboard isn’t even ready. Ok the scores are in,” she concluded.

Nevertheless, the blunder didn’t affect their scores as they were awarded the perfect 40.

Bruno Tonioli said: “Rocked! Shaken! Stirred! Exhilarated! But actually, it was almost like watching 13 weeks of all the best of Strictly Come Dancing, condensed into one dance.

“I loved every single minute of that!” Craig Revel Horwood stated calmly.

“Well usually, I can go on about things, but you guys, I have no words, really. That left me…” Motsi Mabuse tried to explain but was reduced to tears. 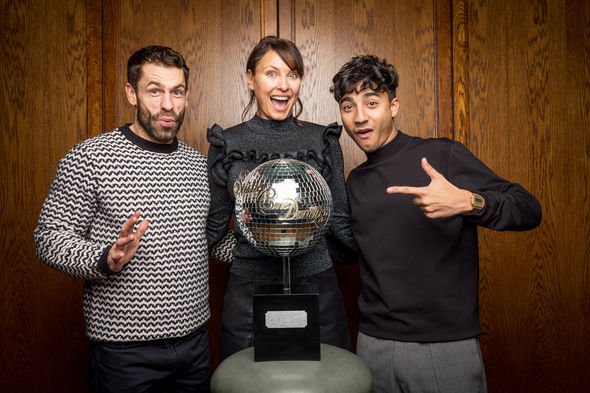 Shirley Ballas then concluded the judges feedback with: “You pushed the limits, you had everything in that routine – we could see your technique.

“It was exciting, good set, good music, good chemistry and body action. You name it, it had it!”

Considering they are the favourites to win, will they have done enough?

Strictly Come Dancing concludes on Saturday night with the grand finale on BBC One.

Newsreader Natasha Kaplinsky was the first celebrity to win the BBC dancing series, which originally aired in July of 2004. She was partnered with Brendan Cole. They finished 39 points ahead of competitor Christopher Parker.

Jill Halfpenny was the second star to impress the judges with her dancing skills. Partnered with Darren Bennett, the pair beat off competition from Julian Clary and Denise Lewis in December of 2004.

Cricketer Darren Gough won the third series of Strictly. He and partner Lilia Kopylova wowed audiences but never once finished at the top of the leaderboard.

Mark Ramprakash was the fourth star to lift the Glitterball Trophy. He was partnered with Karen Hardy and they were the first couple to restart a routine after their initial attempt saw Mark’s mic get caught in Karen’s dress.

Before becoming a Strictly judge, Alesha Dixon won the nation’s hearts and the Glitterball Trophy during the fifth series. She was partnered with professional dancer Matthew Cutler.

Holby City star Tom Chambers was partnered with Camilla Dallerup when he won the sixth series. He performed the Foxtrot and Salsa in the final week.

BBC Breakfast presenter Chris Hollins and his professional partner Ola Jordan surprised viewers when they beat Ricky Whittle and his partner Natalie Lowe in the final. They wowed with the Foxtrot, Charleston, Lindy Hop and Showdance.

Kara Tointon was the eighth celebrity to win Strictly. She danced with Artem Chigvintsev and failed to receive 40 points throughout her time on the show.

Former McFly star Harry Judd was the ninth star to lift the Glitterball Trophy. He didn’t top the leaderboard until week seven but then scored 40 points twice in the final.

The tenth series of the BBC show was won by Olympian Louis Smith. He danced his way to victory with professional partner Flavia Cacace. He faced competition from Kimberley Walsh, Denise Van Outen and Danni Harmer in the series finale.

Love Island host Caroline Flack took to the dance floor in series 12 where she scooped the Glitterball Trophy with Pasha Kovalev.

Jay McGuiness surprised viewers when he won the thirteenth series of the BBC dancing competition with Aliona Vilani. When he learned he’d won, he told host Tess Daly: “I feel spaced out – it’s really weird.”

The sports presenter broke down in tears after beating Danny Mac and Louise Redknapp.

Documentary-maker Stacey fought off competition to make it to the Grand Final of Strictly Come Dancing with professional dance partner Kevin Clifton last year. When they won, Kevin described her as “the most wonderful person”.

How did the Sussexes get such a deep discount on their Montecito home?
Recent Posts
World News
We and our partners use cookies on this site to improve our service, perform analytics, personalize advertising, measure advertising performance, and remember website preferences.Ok