Stacey Dooley Sleeps Over airs every Monday evening at 10pm on W. Each week, award-winning documentarian Stacey Dooley will be staying for the entire weekend at the house of some of Britain’s most unique families. Her hosts in season two include an Orthodox Jewish family, a trad wife and Alice Bowden. Stacey Dooley and executive producer Alice Bowden spoke to Express.co.uk and other press about what is it like to stay at another family home for the weekend.

The new series of Stacey Dooley Sleeps Over see’s Stacey offer an insight into modern life in some of Britain’s more unconventional households.

Across six episodes Stacey will ask the questions everybody wants to know and the answer to and learn a lot about their lifestyles along the way.

Despite returning to do the documentary series for a second time, Stacey noted there were still many awkward moments that come with filming the six-part series.

Speaking to Express.co.uk and other press, Stacey said: “I liked the idea of being totally immersed and I suppose it didn’t feel to sort of bizarre to me because I’ve been on location for years but it does totally change the dynamic. 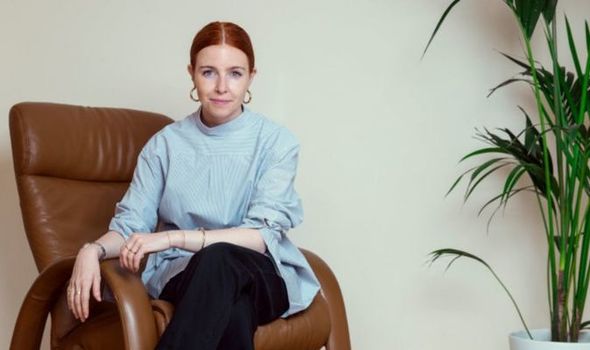 “When you know you’ve got have a conversation and they’ve got to be held to account or you’ve got to ask something in a quite direct manner, you’ve then got to have dinner with them an hour later or ask them how to work the shower so it really forces you as a documentarian to be brave and to be courageous.

“You don’t need to be necessarily confrontational, just ask the questions instead of running around the corner and doing a piece to the camera and director down the road. It’s a really good learning curve for me actually.”

Executive producer Alice Bowden added: “Rather than Stacey going there and staying the night at a hotel, we came up with the idea that she sleeps over so you get all of the kind of intimacy of being a house guest and the awkwardness and uncomfortableness of having to stay in a spare room. Therefore, the series was born.”

She added: “What works is Stacey always has the challenging conversations along the way but you are not judging them, it’s a conversation and you let the viewer make their mind up about these families.”

Stacey also joked one of the most uncomfortable moments of the series was after Lillian and Felipe in episode one renewed their vows.

She said: “What was funny about the Tradwife episode was over the course of the weekend they were renewing their wedding vows, so we all know what goes on and I was directly next door and the wall was paper thin and I thought ‘I’m going to half to get some earplugs because I know exactly how this is going to go down’ but they were actually very quiet so I can only thank them for that.”

Stacey continued: “For me, it is about going into the house and having these really interesting conversations and then handing all of that information over to the viewer and not giving that sort of conclusive piece to camera at the end. I just say ‘That’s what happened this weekend, come to your own conclusion’.

“It’s my job to make people feel comfortable and give them a platform to tell us where they are coming from.”

She added: “It’s much trickier to make something that is less black and white and there is more grey.

“You are sort of floating between ‘Do I think this or do I think that?’ and I really enjoy that and there have been a couple of times where I’ve thought one thing and then I’ve actually thought I was actually a bit judgemental there or I had preconceived ideas.”

Express.co.uk has the full breakdown of the families Stacey will meet in season two and their release dates below.

The first episode is titled Trad Wife and will see Stacey investigate the growing community of ‘tradwives’.

She stays with Lillian and Felipe who live an unconventional way of life in the modern-day.

A Tradwife is someone who rejects their career in favour of taking on the role of a traditional housewife.

In episode three, Stacey travels to Scotland to stay with a family of eco-warriors.

She visits the Hebridean island of Gometra to stay with aristocrat Roc Sandford and his family, who are involved in the Extinction Rebellion and HS2 Campaigns.

The British Lion King – Monday, May 24

In episode four, Stacey stays with Reece Olivier and his family in Nottinghamshire.

Oliver is the owner of two lions, Rock and Rora and a puma named Rogue who live in his back garden.

He also lives with 26 squirrel monkeys, two wallabies and a capybara.

In episode five, Stacey stays over with Rabbi Wollenberg, his American-born wife Blima and their nine children who are aged between one and 16.

During her visit, Stacey learns about ultra-orthodox Hasidic Jews, antisemitism and their way of life.

Living with Down Syndrome – Monday, June 7

In the final episode, Stacey stays at the home of Dom and Kelly whose son Lucas is living with Down Syndrome.

Their son Alexander was diagnosed with cerebral palsy.

Their eldest daughter, Isabella, 13, learned Makaton sign language to communicate better with her brother and now it is part of the family’s everyday life.

Stacey Dooley Sleeps Over airs Mondays at  10pm on W