Ben Shephard and Susanna Reid spoke to Sir Peter Fahy QPM on Good Morning Britain earlier today about the Metropolitan Police force’s behaviour regarding Sarah Everard’s investigation and vigil. It comes after a probationary officer involved in the search for the 33-year-old from South London was removed from duties for allegedly sharing an “inappropriate graphic”. Ben was keen to hear Peter’s opinion on the matter and whether Metropolitan Police Commissioner Dame Cressida Dick should step back from her position, but the retired senior British police officer branded the suggestion as “ridiculous”.

Ben asked: “Peter, does Cressida Dick have a case to answer? The Lib Dems have called for her to step down.”

He replied: “No, I think that again, just shows the ridiculousness of the situation, that politicians who pass legislation and then rush into judgement on social media without even receiving the full report of what’s happened.

“Cressida Dick is the first female Commissioner of the Met, she feels very passionately about this issue and this situation, she’s been put in an impossible situation under huge political pressure from both the Mayor and the Home Secretary. 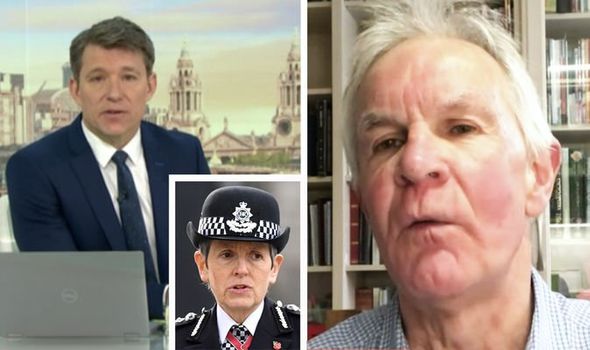 “But this is a really complex unprecedented situation of a pandemic – pandemic legislation cuts across the basic human rights and people are feeling – obviously – very emotional about that but then getting involved in a protest which then breaches those regulations.

“And as I say, there is an argument they [the Metropolitan police officers] should’ve just completely stood back and ignored the breaking of the law, but then other people would’ve criticised that and say ‘you intervened in other places, why didn’t you intervene here?’” Peter remarked.

It comes after the police have been criticised for the way they handled Sarah Everard’s vigil on Saturday.

Thousands of people gathered over a period of time to lay flowers and light a candle on the bandstand in Clapham Common, South London.

And one arrest, Patsy Stevenson who was on GMB yesterday to talk about the incident, made headlines. 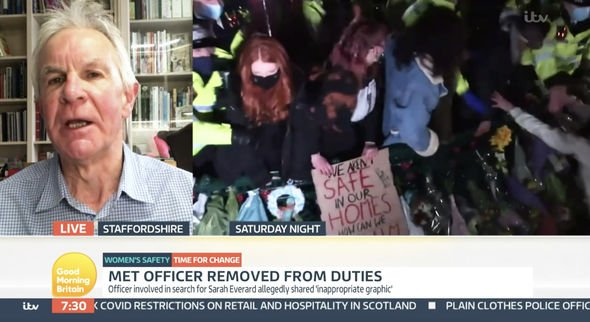 To add to this, more recent reports are discussing a probationary Met officer who allegedly shared an “inappropriate graphic” via social media last week.

The officer in question was involved in the search for Sarah and has been placed in a non-public facing role, with a referral having been made to the police watchdog.

The Met said it expected officers “to behave professionally at all times”.

The force added that the image did not “contain photographic images, no images of Sarah, nor any other material obtained from or related to the investigation into Sarah’s murder”, but her family had been made aware of what had happened. 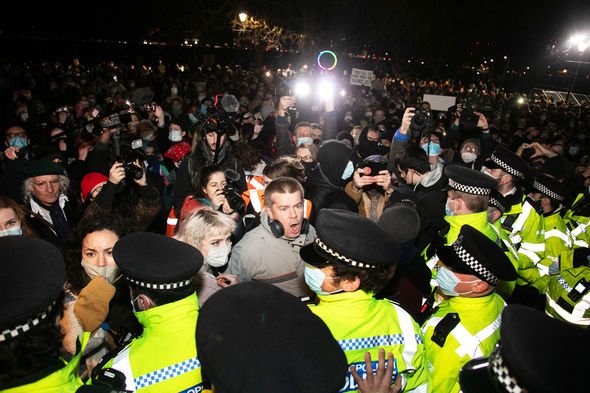 Liberal Democrat leader Ed Davey has written a letter to Metropolitan Police Commissioner Cressida Dick calling on her to resign.

The letter, also signed by Liberal Democrat candidate for Mayor of London Luisa Porritt and Spokesperson for Home Affairs Alistair Carmichael detailed the scenes at the vigil were “disgraceful”.

It comes after GMB viewers took to Twitter to comment on Susanna and Ben’s interview style – with many calling for Piers Morgan’s return once more.

One said: “I always watch GMB, however it’s not the same since Piers has left, just saying.”

“Watching @GMB but it’s so dry and boring now. Ben looks like he’d rather he anywhere but in that studio. I can only see the ratings going through the floor #GMB,” someone else mentioned.

A third added: “Cant help thinking how Piers would have reported this vigil and aftermath! Susannas still doing her documentary voice today too… #GMB.”

“Can someone tell Sussana Reid that her toneless monologue style of questioning is infuriatingly annoying and dull to listen to..#GMB,” a tweet read.

Meanwhile, one commented: “Love him or hate him now @piersmorgan has #GMB has lost its punch.”

Good Morning Britain airs everyday at 6am on ITV.