Fans of The Real Housewives of Beverly Hills want Kris Jenner and Faye Resnick to join the show after Kyle posted a photo of the trio together at a slumber party.

Kris and Faye are good friends of Kyle’s and both have appeared on RHOBH as guests in the past, but fans of the show want more. The Instagram photo has prompted the show’s fans to beg for Bravo to cast Jenner and Resnick permanently. 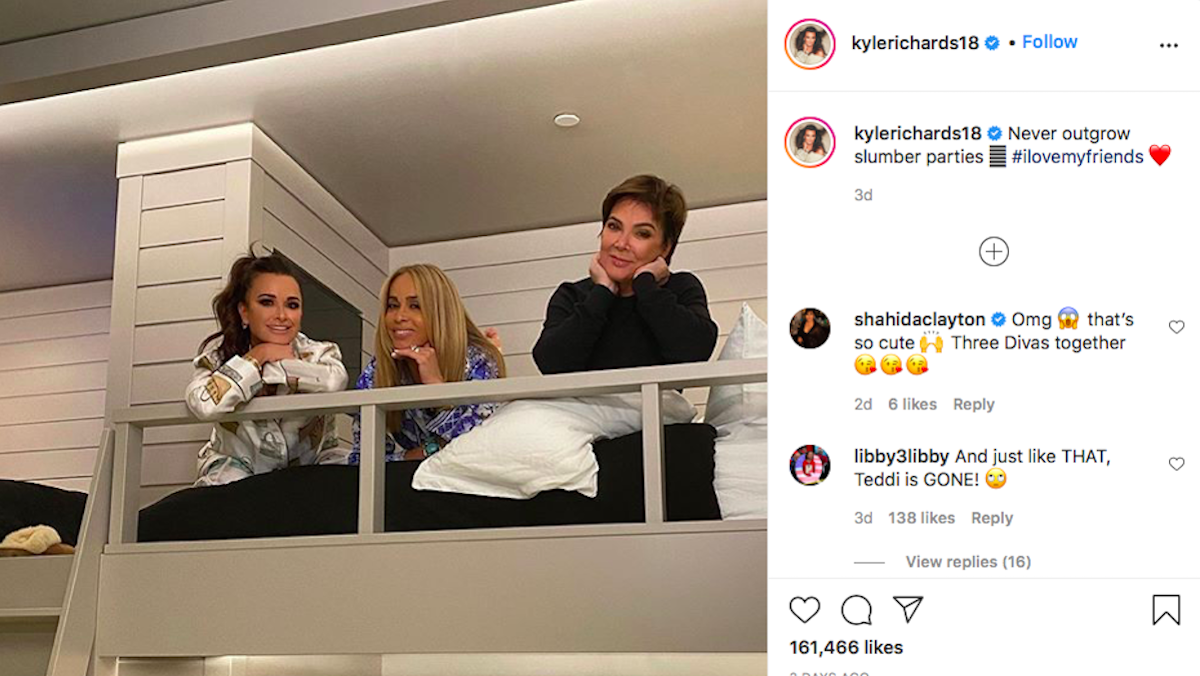 The Instagram post comes just after rumors began to swirl about who would replace full-time cast-members Denise Richards and Teddi Mellencamp. Rumors are also swirling that Kyle Richards’ oldest sister Kathy Hilton will join the show as a “friend.” Hilton has appeared as a guest in previous seasons and is also the mother of Paris Hilton.

Playboy magazine and the last supper

Resnick had one of the more memorable appearances on the show during season one at a dinner party hosted by Camille Meyer (formally Grammer). The party took a turn after Meyer abruptly announced at the dinner table that Resnick had once posed nude for Playboy magazine. Kyle Richards reminded everyone that Meyer had also appeared in Playboy and soft-core pornographic films.

The night got even worse after Richards and Lisa Vanderpump annoyed another guest, psychic Allison DuBois, by repeatedly asking for psychic readings. When a tipsy DuBois finally appeased Richards, she told Richards that her husband would never fulfill her while puffing on an electronic cigarette. The evening ended with several of the women arguing before abruptly leaving the party.

Jenner will guest-star on RHOBH occasionally

Jenner has also appeared on the show in the past but recently said that she is not interested in joining the cast full-time. The 64-year-old momager told Ellen DeGeneres that she would not be appearing on the show other than as a guest.

“I think I would do it just to go on once in a while to be with my friend Kyle Richards, but as far as me doing a show like that regularly, there’s just too much going on in my life,” said Jenner on the prospect of becoming a full-time cast-member.

Jenner recently announced that her own reality show, Keeping Up With The Kardashians, would be ending next year after 14 seasons. Fans hoped that the announcement would free up Jenner to appear as a new RHOBH cast-member, but it looks like they will have to settle for her guest appearances on the show.

The Real Housewives of Beverly Hills is currently on hiatus on Bravo.