Season one of Outlander introduced fans to the brutal and dangerous world of Inverness during the 18th century with the English lording over Scotland. The show featured much violence – much of it meted out by the sadistic Captain Black Jack Randall (played by Tobias Menzies). One of the early moments of extreme violence in Outlander came after Jamie Fraser (Sam Heughan) spoke about how he was flogged by the evil Redcoat.

Why was Jamie Fraser flogged?

Jamie and Black Jack had a complicated relationship with questions over whether the Redcoat was in love with the Highlander in a twisted way.

The pair came across each other a couple of years prior when Black Jack and a group of his men showed up at Lallybroch demanding supplies.

There was an altercation between Jamie and the soldiers, leading his sister Jenny Murray (Laura Donnelly) to be threatened with rape by Black Jack.

However, she was spared the sexual assault when Black Jack’s inability to perform saved her and the captain knocked her out. 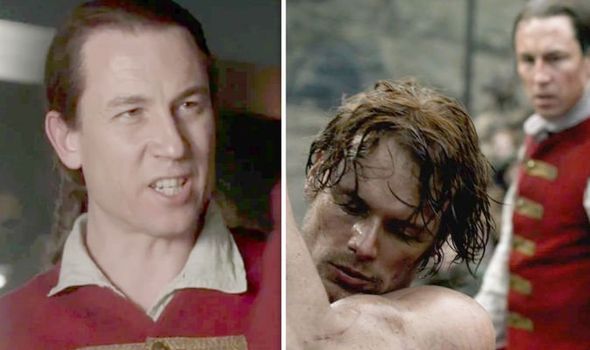 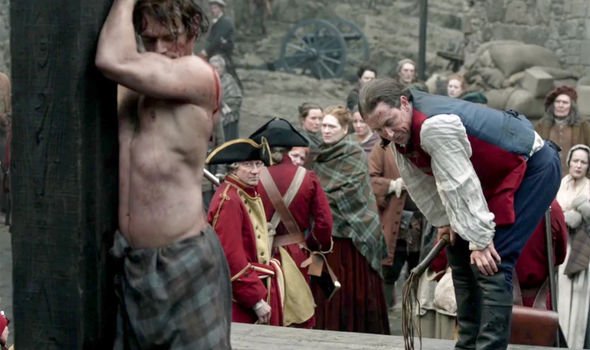 But this wasn’t the end of it after Jamie then got hauled off to Fort William for his defiance but managed to escape.

Jamie was later caught and then finally flogged but to make things worse, Black Jack decided he was going to administer another hundred lashes.

Despite protests Jamie’s wounds needed time to heal, Black Jack whipped him again and left him with a ravaged back and permanent scars.

The violent moment was not only physically distressing but also emotionally after Jamie’s father witnessed the flogging. 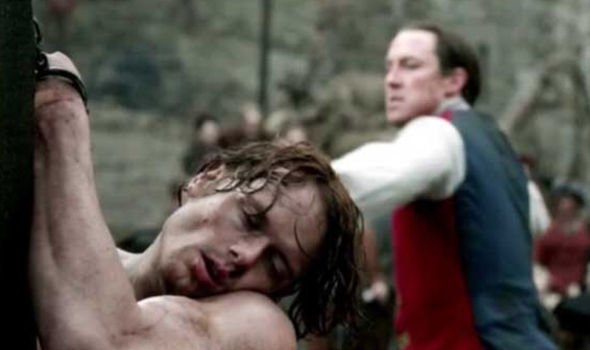 During the harrowing ordeal, it looked like Jamie had died as the pain became too much.

Jamie’s father sadly died from the shock of watching his son receive such a brutal beating, leaving the young man to look after the family and Lallybroch.

After his beating, Jamie eventually escaped to France where he remained for several years.

Speaking to Variety back in 2014 about shooting the scene, Heughan admitted it was hard work not least because it was shot in freezing temperatures in February.

DON’T MISS…
How do sex scenes in Outlander differ from other period dramas? [ANALYSIS]
Outlander cancelled: Was Outlander supposed to end after season 3? [INSIGHT]
Outlander: Why was Captain Black Jack killed off from Outlander? [EXPLAINER] 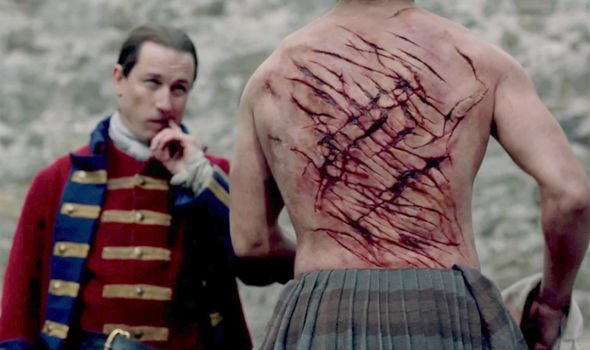 Heughan had a blood rig on his back to mimic Jamie’s wounds as well as being manacled and hanging from the stage.

He explained: “… I really wanted to see Jamie lose almost everything, but not.

“Tobias, he goes for it, it was wonderful. I love the bit where he slips in the mud, and when the back starts flaying off.

“It had to be visceral, because there’s a guard that faints, so it has to be epic and it has to be the reason he has these scars on his back that becomes this [driving force]. I’m so pleased it turned out so well.”

Menzies described the shoot as “intense and very technical” with CGI later used to fill in the gaps.

The Crown star was required to hit a piece of plastic and at the same time demonstrate malevolence.

Both Jamie and Jack Black were both inextricably changed forever by the experience which bound the two of them forever.

The flogging is also important because it will stay with Jamie forever and Black Jack referred back to it.