In 2020, the sequel to the popular mockumentary Borat debuted. Not only did it receive many, many streams, but the film earned nominations at the prestigious Academy Awards — a rare feat for a largely comedic movie. What is Borat Subsequent Moviefilm‘s full title, and is it the largest ever nominated at the award show?

In Borat (as it’s most commonly known), Baron Cohen portrays the titular character, a journalist who travels from Kazakhstan to the U.S. to make a documentary. Though the actor remains in character, most of those around him aren’t in on the joke. Borat was nominated for Best Adapted Screenplay at the 2007 Academy Awards.

‘Borat Subsequent Moviefilm’ was released in 2020

Given the concept of “tricking” those into believing he’s actually Borat, a sequel to hit film seemed out of the question, what with Baron Cohen’s rising star power. He focused on other projects over the years, surprising the world with his 2020 Amazon Prime Video release: A Borat sequel.

Borat Subsequent Moviefilm: Delivery of Prodigious Bribe to American Regime for Make Benefit Once Glorious Nation of Kazakhstan sees Borat go back to the U.S. This time, he brings along a stowaway — his daughter, Tutar. They spend the duration trying to figure out how to “give” her to Vice President Mike Pence as a “gift.”

The ‘Borat’ sequel is nominated at the 2021 Oscars

Like its predecessor, Borat Subsequent Moviefilm earned high praise from audiences and critics alike. It brought in millions of viewers to the streaming platform in a year essentially void of theatrical releases. Additionally, Baron Cohen and his collaborators received award nominations.

As with the original Borat, the film is nominated for Best Adapted Screenplay at the 2021 Academy Awards. That award goes to Baron Cohen and his fellow writers. Maria Bakalova, who portrayed Tutar, received a nomination for Best Supporting Actress. (Baron Cohen is also nominated as an actor, but for his role in a different movie, The Trial of the Chicago 7.)

It’s not the longest movie title ever 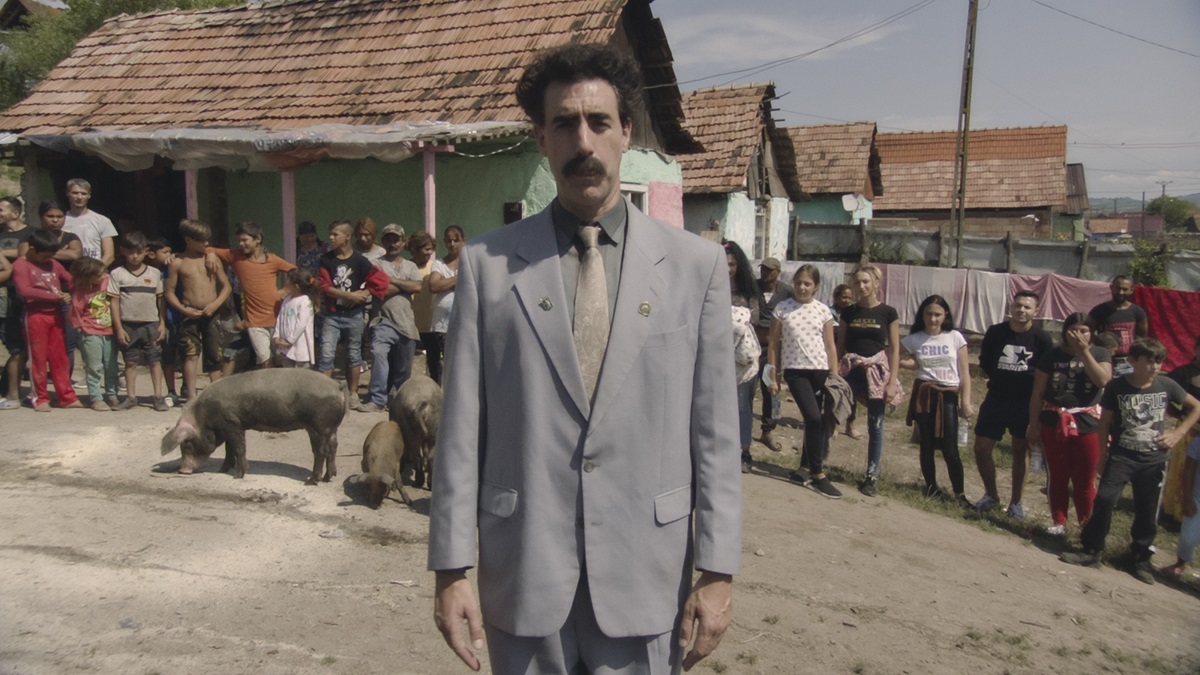 The first Borat film’s full title is 12 words, making it one of the longest ever nominated at the Oscars. But the second movie surpassed it, with a whopping 18 words. Other long Academy nominated titles include Dr. Strangelove or: How I Learned to Stop Worrying and Love the Bomb (13 words) and The Assassination of Jesse James by the Coward Robert Ford (10 words).

Borat Subsequent Moviefilm may become the longest title to ever win at the Academy Awards. However, other, less acclaimed flicks have longer ones. Often cites are the Night of the Day of the Dawn parody horror franchise, whose titles can be upwards of 40 words.