The Victorian era has been shaped by its men, from Sherlock Holmes to the dastardly deeds of Jack the Ripper. That’s not to say that inserting a woman into this world immediately revolutionizes the premise. In fact, there have been numerous female detectives created for the period, with the plotlines generally revolving around how strange and unusual she is for entering a man’s arena. Maybe that’s why Rachael New’s PBS mystery series, “Miss Scarlet and the Duke” feels so charming, because Being Feminist (capitalization intended) isn’t what it sets its focus on.

Eliza Scarlet’s (Kate Phillips) father was a retired detective who taught his daughter everything about detection. When he dies, Eliza is left needing to find a way to keep a roof over her head, so she decides to carry on in her father’s footsteps and become a private detective. However, the men of Scotland Yard, especially her childhood friend William “The Duke” Wellington (Stuart Martin), see Eliza as little more than a hindrance.

What makes “Miss Scarlet and the Duke” work so well is what feels like brevity. In five episodes, 50-minutes each, there’s a breathless quality to its blend of mystery-of-the-week and an overarching story. We meet Eliza as she learns her father has disappeared. Branded the town drunk, she doesn’t pay much heed to what’s happened until his body is presented to her. This matter of necessity could put Eliza on the path to a hasty marriage with the kind-hearted, if nerdy, Rupert Parker (Andrew Gower). Instead, she decides to continue her father’s work. The individual mysteries are all fun, ranging from straight-up murder to Eliza infiltrating a presumed terrorist group… which is actually just women trying to gain suffrage.

As she becomes more enmeshed in local events, she returns again and again to Martin’s “the Duke,” who, at times, sees her femininity as an advantage but generally just wants her to give up the life and fall back into conventional gender roles. Audiences might remember Phillips for playing the demure Jane Seymour in “Wolf Hall,” and Eliza Scarlet has a similar primness to her. She elegantly deduces information in a Sherlock Holmes way, without falling into the trap of presenting an overbearing “Girl Detective” veneer. When Eliza ends up in jail or in front of a judge for trying to be a woman doing men’s work, she’s frustrated, of course, but the script never beats the audience over the head with “she’s hindered because she’s a woman.” 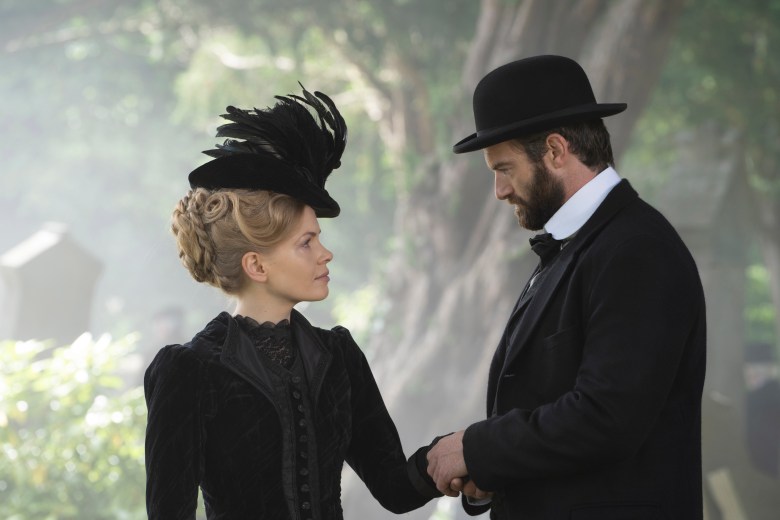 Phillips’ warmhearted presence is tempered by Martin as the loud, brash Victorian “Duke.” Outside of being the heavy to scream at villains or deliver a punch, his relationship with Phillips’ Eliza is one of equals who see two different methods of solving crimes. When Duke demands Eliza give up being a detective it’s not wholly because it just isn’t done during the times, but because of a promise to her father to keep her safe. The series, wisely, avoids giving them a “will them, or won’t them” type of relationship, like a Victorian version of “Moonlighting,” though the finale leads one to question if that could still happen. Hopefully not, as the pair seem to work best as foils. He sees crime as a dirty, gruesome business that benefits from Eliza’s more calm, analytical mind.

For most of the series, their relationship is akin to an annoying little sister and her big brother. Martin’s scowling, growling, and eye rolls obscure an obvious respect and admiration for Eliza. The rest of the cast is particularly captivating, from Gower’s sweet Rupert to Ansu Kabia’s frightening Moses, whom Eliza employs as a “debt collector.” Kabia and Phillips also have a strong chemistry, especially when she believes he might be involved in a massive forgery that her father discovered. Moses is given some backstory, involving his father and slavery, that explains his taciturn personality and, hopefully, future scripts give Kabia an opportunity to be part of the action alongside Phillips.

As the first season goes on, Eliza’s mysteries start to pivot toward a grander plot involving her father and police corruption, and while that comes together nicely, the individual stories feel far more entertaining. Episode 4, entitled “Momento Mori,” is the best of them all, with Eliza investigating a possible haunting from beyond the grave involving death photography. This blending of elements in Victorian culture lets different genres come through and the episode becomes a spooky throwback to Gothic horror stories of the era.

By the time the first season comes to a close, you’ll want to see more from Eliza Scarlet. Drawn from the likes of other heroines like Elizabeth Peterson’s Amelia Peabody, Phillips’ performance is so enthralling it brings thrills on its own and enhances everyone else’s work. If you’ve been seeking a new Victorian crime show to binge, this is it!

“Miss Scarlet and the Duke” premieres Sunday, January 17 at 8 p.m. ET on PBS.