“Marvel’s Jessica Jones” gets off on the wrong foot in Season 3 and stays there until the lackluster end. Exhibiting the worst tendencies of the now-dead Marvel-Netflix franchise, the first two episodes get stuck repeating themselves, bloating their thin stories and familiar themes to exhaustion while star Krysten Ritter does all she can to add a little bit of life to the proceedings. But like the canceled franchise it’s closing out, “Marvel’s Jessica Jones” feels like a walking husk of itself in Season 3 — a zombie that’s still standing, out of obligation more than desire.

The central paradox of Season 3 is defined in the first scene, when Jessica Jones (Ritter) finds herself on a sunny beach in Mexico ripping a child from her father’s arms. You see, the dad doesn’t have parental rights anymore, so it’s illegal for him to take his daughter on an international vacation. But the kid wants to see her dad. She gets mad at Jessica for showing up to take her away and stays angry the whole trip back to New York.

Did Jessica do the right thing, or did she just do what was lawful? What’s the difference? How can she form a sustainable life, as a private investigator and superhero, when she knows she can do whatever she thinks is right, but the cops, courts, and government may disagree and penalize her for it?

These questions aren’t new to the superhero genre, nor does Season 3 offer up any revelatory answers. It’s far more concerned with an exhausting and predictable serial killer arc (starring none other than “The Knick” and “Russian Doll’s” Jeremy Bobb) and how it ties into Jones’ fractured friendship with Trish (Rachael Taylor). Through this new investigation — that starts with a dude knocking on Jessica’s door and stabbing her in the stomach — Jessica will learn why due process is an important, if frustrating, staple of the justice system, just like Batman, Captain America, Daredevil, Iron Man, Wolverine, and so many more superheroes have already learned prior.

But far more frustrating than the theme’s familiarity or the obvious outcome are the structural and formal flaws inherent to yet another season of a Marvel-Netflix TV show. I guess it’s fitting that “Jessica Jones” Season 3 sees every facet of the franchise through to the end, and it’s probably contractually mandated to run 13 swollen episodes instead of a tight six, but that doesn’t excuse the tired story choices. 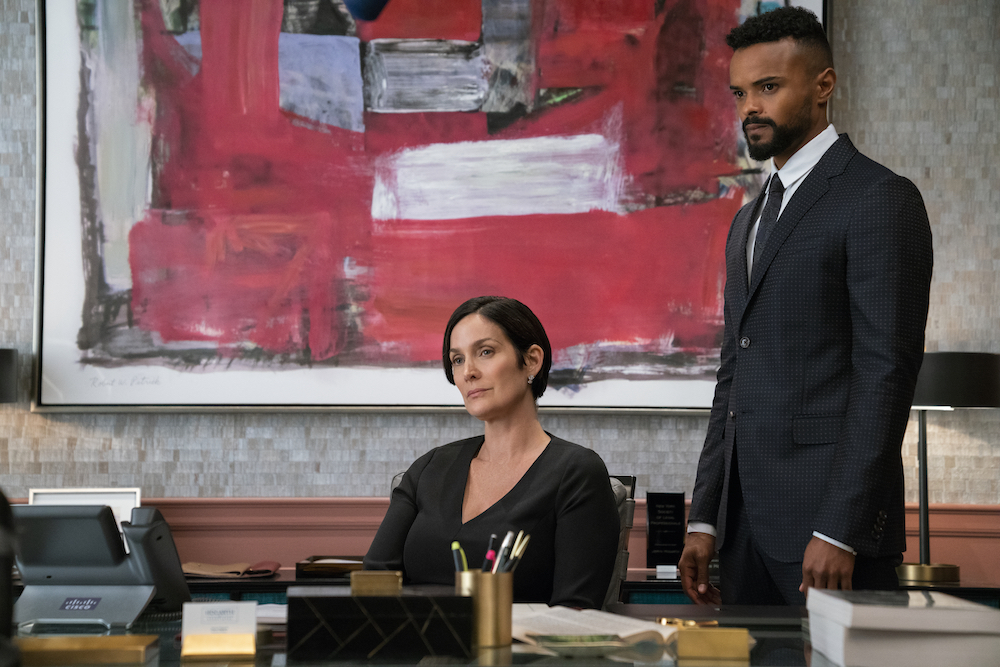 Take the premiere, which is told from Jessica’s point of view while tracking Trish’s developments, too. We find out that Jessica and Trish are still at odds, and given the former killed the latter’s mother in the Season 2 finale, that’s none too surprising. Also unsurprising: Trish has taken to her own form of vigilante justice, after going through a risky procedure to gain superpowers last season. “So, Karl’s near-fatal experiment worked?” Jessica says, after seeing her former “normal” friend do some crazy parkour up a wall and jump out of a fourth-floor window and walk away.

Yeah, Jessica, it did. But even though that’s all the audience needs to know in order to move forward, the entire next episode is spent watching Trish discover the powers we’ve already seen, train for activities she’s already done, and try on superhero costumes we know she won’t wear. Even the tired homage to the comics, when Trish dons the bright yellow and black Hellcat spandex and hates it, is a dud — what we haven’t literally already seen happen, we’ve seen before in other, similar superhero stories.

Worse yet, even with too much time to fill, the parallel arcs of Jessica’s experienced vigilante and Trish’s rookie rogue agent are rushed; they go from a broken friendship, to an awkward superhero-sidekick routine, and back to mortal enemies without the nuance needed to make their relationship affecting. Despite trying to explore morality between two similar yet distinct “superheroes,” this friendship is forced into conflicts that are either unjustified, tired, or both.

Moreover, the budgetary constraints placed on the series start to show in an extremely negative way. Fight scenes feel corny and off-kilter, like when Jessica violently shoves a heavy couch into an unsuspecting gunman, and the subsequent cut shows him falling over as if his grandmother nudged him aside while going for the hard candies on the coffee table. Another cut shows his gun clatter to the ground with such timid nonchalance he may as well have placed it there. Part of the problem are the shots themselves, which would be hard to cut together to mimic the needed superheroic intensity, but there are later scenes where the quick mix of edits are actually mistimed or out of order.

By the time the final episode goes through the paces, there’s not much hope for a satisfying ending. Yes, there’s a forced cameo or two to spark memories of the good ol’ days, but the final showdown is a far cry from Season 1. Despite setting up the climactic fight between Jess and Trish since the start, the cliched motivations used to get there undermine any emotional impact that could’ve been. You don’t care who wins the fight because it doesn’t feel fair or even honest, nor does Jessica’s future hinge on the outcome. Season 3 doesn’t provide any narrative closure for fans, nor does it show enough of a passion for telling this story to evoke any outrage over it ending. So just let it go. At this point, it’s clearly time to say goodbye.