To say that “Jurassic World: Dominion” squanders its potential would imply it had much to begin with. Perhaps some other, theoretical sequel to J.A. Bayona’s serviceable “Jurassic World: Fallen Kingdom” may have had promise, as a follow-up to that haunted-house creature-feature that ends with a human clone setting dinosaurs loose upon our world. However, “Dominion” director and co-writer Colin Trevorrow (the man responsible for “The Book of Henry”) is the opposite of an idea guy. His apparent “Jurassic” finale goes by the way of “Star Wars: The Rise of Skywalker” — ironic, since that was Trevorrow’s job — and brushes aside every promise made by its predecessor. It’s a sequel whose images convey little meaning, other than that which they borrow from other movies, and the result is one of the worst big-budget Hollywood blockbusters since, well, Trevorrow’s “Jurassic World.”

To introduce us to this new era of humanity, in which dinosaurs live among humans and alter our relationship to mother Earth, “Dominion” begins with an oceanic set-piece that quickly pulls out to reveal — drum roll, please — a cheaply produced internet news documentary in the vein of The Dodo, the kind of crowd-sourced content that, in a better movie, might have offered a window into the way people viewed this new world. Here, it comes off as an excuse for some thoughtless, haphazard framing with self-serious expository voiceover bordering on parody, given the sheer volume of plot-specific information condensed into a single clip. And yet, the film still spends the next half hour in introductory mode, catching us up on characters and setting up a pair of vaguely related conflicts meant to bring the old cast into contact with the new.

Movies should, of course, take their time to establish their central characters, but “Dominion” lays out these sequences in utterly mechanical fashion. No one enters or exits a scene with urgency or purpose (a problem that carries over to the action as well). Established characters show up to explain where they are in life and the film moves on to the next item on its checklist.

Claire Something (Bryce Dallas Howard) and Owen Someone (Chris Pratt) occupy an isolated tundra cabin where they care for a now-teenaged Maisie Lockwood (Isabella Sermon), the clone granddaughter of Jurassic Park co-founder Benjamin Lockwood (James Cromwell). Maisie is now the object of a corporate manhunt, leading to yet another malformed story about Claire accepting her motherhood instincts, not to mention more moody sulking from Owen (Pratt, as usual, struggles to put on a tough-guy allure). Oh, and Owen’s pet raptor Blue shows up as well, having given birth to a cute little merchandising opportunity, Beta.

Meanwhile, in a seemingly unrelated plot about giant locusts threatening worldwide famine, Dr. Ellie Sattler (Laura Dern) seeks the help of her former lover and comrade Dr. Alan Grant (Sam Neill). There’s an implied contrast between them — Ellie has risen through the ranks of a prestigious university, while Alan is still a loner in search of funding for his digs, much like his previous appearances — but both characters show up wearing pretty much the same outfits they did 30 years ago.

Everything about them, from their appearances to the way they interact, is defined by who they were in a much better film, as if no time has passed. They are, essentially, trapped in amber, but not in a way that “Dominion” reckons with beyond a fleeting line of dialogue. (Jeff Goldblum’s Dr. Ian Malcolm, who shows up later on, also dons his signature leather jacket but his stammering comedic presence is always welcome.)

When Maisie and Beta are kidnapped, Claire and Owen enlist the help of a wisecracking pilot, Kayla Watts (DeWanda Wise), whose tonally confused quips frequently fall flat — a problem pervading most of the film. There’s an Omar Sy character you most assuredly don’t remember from a previous “Jurassic” entry. They soon make their way to an island lab housing a dinosaur sanctuary, the same place Ellie and Alan happen to be headed, and it’s here that most of the movie is set.

Sorry if you wanted a story about what the world might be like if our eons-old reptile ancestors suddenly invaded and put their feet up for good, but this is another saga of a dinosaur island run by a greedy corporation, far from civilization. But what of the other major promise in “Fallen Kingdom,” the one about reckoning with human cloning, both from an ethical and psychological standpoint? Well, the “Rise of Skywalker” comparisons aren’t just about the movie’s quality, because this idea is also partially retconned in a way that makes it far less intriguing.

In the interest of fairness: There are about 20 minutes in which “Dominion” introduces fun new concepts before flying off the rails and becoming a buck-wild mechanical bull ride — with one action beat in particular that feels like a hallucination — but this delightful section still leaves nearly two whole hours of mind-numbing “legacy-sequel” pablum that barely qualifies as a movie. The number of shots that convey any kind of tension or meaning on their own can be counted on one hand (I know, because I kept track), leaving even fewer pairs of shots where a cut from one to the next is geographically or emotionally comprehensible.

Perhaps comparing it to the original “Jurassic Park” is too a high a bar — somehow, “Dominion” has an inverse relationship to scale, relying entirely on characters pointing out the size of various creatures for this to become apparent — but even the 2015 “Jurassic World” defeats it in the visual department. The shot and scene construction of Trevorrow’s first dino outing was at least somewhat clear, even if the frame always seemed to function antithetically to the story. It’s one heck of a dilemma, having to choose which of his two entries works better: the one where each decision has the opposite effect of what was intended, or the one where decisions have no effect at all. 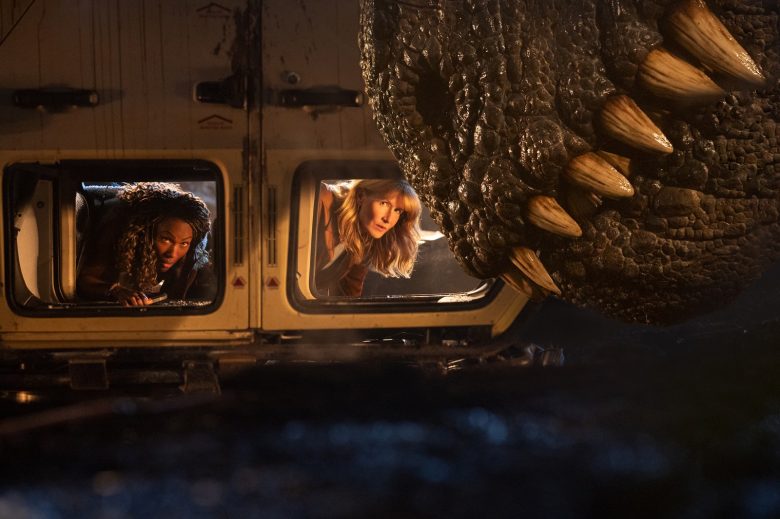 There are a handful of exceptions, but these borrow from other contemporary films. There’s a shot that quotes “Mad Max: Fury Road,” and a landscape that seems to ape the works of Chloé Zhao. They don’t last long, but the only time “Dominion” springs to life is when it rips from classic iconography.

Those aforementioned 20 minutes concern a delightful sequence set in and around an underground black market in Malta. It’s a pitstop for Owen and Claire as they search for Maisie, but it’s filled with raptor fights, seedy poachers, and stalls selling dino kebabs, like something out of a “Star Wars” cantina. It’s imaginative, and exactly the kind of setting a sequel like this should have. Soon, a bike chase breaks out, with raptors swerving between buildings and narrow alleyways. The film’s propensity for mismatched shots finally finds a chaotic companion, cutting from one dino chasing a motorcycle to another tracking people on rooftops as if it were Jason Bourne.

The Bourne influence becomes shockingly literal when a bloodthirsty raptor — after a brief shot of it smashing its face through a wooden door, à la Jack Nicholson in “The Shining” — jumps between balconies in a shot that accurately mimics the most famous beat from “The Bourne Ultimatum,” like someone decided to apply the core concept of “The Velocipastor” to a modern spy thriller. It’s the wildest, strangest, most hilariously head-spinning thing any Hollywood movie has done this year — but it’s also a searing indictment of the rest of the film.

The only joy in this movie comes from its precise mimicry. It has no identity of its own, which becomes depressingly apparent when the franchise’s old and new characters finally come face to face. The first meeting plays like the scene from zombie satire “Shaun of the Dead” in which the main cast greets their doppelgangers. Multiple sequences frame the action to crowd the entire cast into frame, like a last-minute family photograph. They aren’t people with unique personalities so much as they are, collectively, the cast of a long-running franchise that needs to be put out of its misery.

With little tension or humor, there’s nothing keeping “Jurassic World: Dominion” afloat beyond the naïve hope that recognizing the familiar will be enough for some viewers. Maybe it will be, but it’s proof that we’re in one of the dullest, most artless periods of Hollywood blockbusters yet — “Top Gun: Maverick” notwithstanding — and we could be stuck here for some time.