Joe Alwyn and Alison Oliver share plenty of intimate scenes in Hulu’s new series Conversations With Friends. But that’s not an issue for Alwyn’s girlfriend Taylor Swift, the actor has said.

Conversations With Friends is based on a book by Irish writer Sally Rooney, who also penned the novel that inspired 2020’s hit Normal People. The 12-episode series premieres May 15. Alwyn plays a character named Nick, a 30-something actor married to a successful writer named Melissa (Jemima Kirke).

Melissa meets two younger women, Bobbi (Sasha Lane) and Frances (Oliver), when they are performing their spoken word poetry together in Dublin. The outgoing, self-assured Bobbi and the cerebral Frances begin spending time with Melissa and Nick. As Melissa and Bobbi engage in an open flirtation, Frances and Nick embark on a clandestine affair that ends up straining Frances’ relationship with Bobbi, who is her ex-girlfriend. 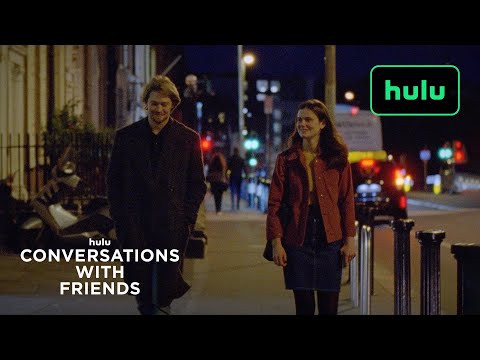 Normal People’s explicit sex scenes between Connell (Paul Mescal) and Marianne (Daisy Edgar-Jones) generated plenty of chatter online. Can viewers expect to see the same between Alwyn and Oliver in Conversations With Friends? A trailer suggests there will be plenty of skin in the new show. But that’s not an issue for Swift, Alwyn explained to Extra when he was asked if he might cover his girlfriend’s eyes when they were watching the show.

“I mean she’s read the book and she loves the book so she knows it. She just like couldn’t be a bigger fan of the project,” he said.

Swift was an admirer of Rooney’s novel long before Alwyn got involved in the TV adaptation. “I really like her book Conversations With Friends,” she told Entertainment Weekly in 2019 (via The Cut). She added: “I like the tone she takes when she’s writing. I think it’s like being inside somebody’s mind.”

As for those scenes with Oliver, they might look sexy on screen, but the reality of filming them is something else entirely, Alwyn said.

“We were guided through it with an intimacy coordinator, Ita O’Brien, who is great,” Alwyn told The Guardian. “They’re essentially choreographed. So they’re like fight scenes. They’re quite mechanical. And obviously they’re weird, funny, strange things to do with your friends. But when Lenny [Abrahamson, the director]’s in the room, cracking jokes, and there’s 10 crew members around, and it’s freezing cold or boiling hot, it just takes all the sexiness out of it.”

He went on to say that the sex scenes weren’t just there to titillate, but helped develop the characters and their story.

“They are kind of extensions of the conversations, in their own way,” he said. “Each one, hopefully, should feel slightly different and mean something different to the people involved, and they’re not just kind of gratuitously thrown in. But, I mean, obviously, it’s a weird part of the job.”

Conversations With Friends is streaming on Hulu beginning May 15.