This year’s “Jeopardy!” Tournament of Champions has a winner.

A matching donation of the $250,000 grand prize will be made to Hope of the Valley Trebek Center for the Homeless in honor of beloved longtime host Alex Trebek, who died in November following a Stage 4 pancreatic cancer diagnosis. According to a “Jeopardy!” press release, the center will assist up to 300 people per year with shelter, intensive care management, mental health services, job training and substance abuse counseling, among other services. 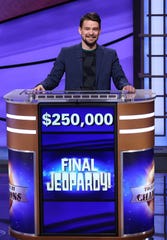 Who will be the next ‘Jeopardy!’ host? Everything we know about the search

Alex Trebek of ‘Jeopardy!’ dies at 80 after pancreatic cancer battle