“You have to be careful of the stories you tell, and you have to watch out for the stories you are told,” goes the meditative opening voiceover of “Inconvenient Indian,” an evocative and visually ripe love poem to Canadian Indigenous culture. Our guide is writer and Native rights activist Thomas King, whose 2012 book “The Inconvenient Indian: A Curious Account of Native People in North America” has been given an absorbing screen treatment by Indigenous Canadian filmmaker Michelle Latimer. As King offers: “History is a story we tell about the past,” and Latimer understands filmmaking is a powerful storytelling tool. Unearthing contemporary Indigenous culture with a tender reverence, “Inconvenient Indian” urgently reframes an ugly narrative we’ve been fed for far too long.

Shepherding the film as a sage narrator, King sits comfortably in the backseat of a vintage taxi cab, gazing knowingly at stolen land now known as Toronto. His chauffeur wears a coyote headdress, and occasionally gives the camera cunning glances. The image is inspired by King’s overarching parable about a coyote who covets a flock of ducks’ beautiful feathers, plying them with promises and always asking for more. Though we never see him speak, King is a ubiquitous presence in the film, whether he’s riding in his golden chariot or munching popcorn in a movie theater as Westerns play out the myth of “Cowboys and Indians.”

Latimer foregoes the traditional talking head documentary structure, choosing instead to luxuriate in a more ephemeral interplay between subject and image. A breathtaking early shot captures a man in traditional headdress and body paint surveying a wide open plain that leads to an obtrusive cityscape. King’s warning about which stories to believe cuts to a historical re-enactment of Custer’s Last Stand; the mock violence cuts sharply into Latimer’s slow pans across cheering crowds of white Canadians. An exhibit in a geology museum feels similarly uneasy, especially when compared to the vibrant Native culture in the countervailing scenes. King calls such archeological displays “voiceless objects from the past, unthreatening and without agency.” 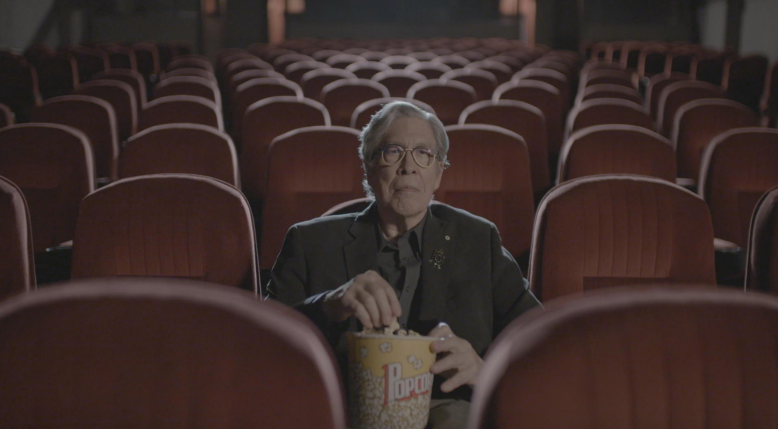 The film aims to give voice to the voiceless, imbuing them with agency not by excavating the past but telling Native stories of today. In its most striking sequence, Latimer follows a man on a seal-hunting expedition, capturing every step as he shoots, clubs, and skins the massive animal. Using a white canvas frame as snowy camouflage, he instructs the cinematographer to get down on his stomach, making the viewer feel like they’re right there behind him waiting for the kill.

Many of these cultural practices have become controversial, which is more than ironic considering the resources pillaged from Native lands for centuries. After soaking a long string of intestine in ice water, the young hunter weaves the slippery pink rope into a thick braid with mesmerizing precision. Later, he delivers some choice cuts to a neighbor, who slices a small piece of raw flesh to feed to her smiling toddler grandson. He wipes a bit of blood on his shirt, his giggle underscoring the joy of traditions being kept alive.

Latimer employs traditional music throughout the film, some with chanting vocals, others with plaintive strings and pulsing drums. The Native score transforms a halloween parade into an ominous bacchanalia; as the camera weaves through the crowd it settles on a young man dancing in a headdress, whipping the feathers back and forth like a fabulous wig. A young white couple dressed in “Indian” costumes smile dumbly for the camera, as their goofy grins revealing more than they know.

Latimer occasionally employs an alienating echoing effect over parts of the voiceover that can distract from the subject at hand. King’s words are arresting in their simplicity, powerful in their righteousness; he needs no bells and whistles to get his point across. The choice to play protest footage in slow motion and without diegetic sound has the same muddling effect, as such images would have been powerful enough on their own. But it does send a clear message to separate these scenes from their original context: This has all happened before, it is happening now, and it will continue to happen. Pay attention to the stories you hear — and, more importantly, to the people telling them.