Biopics ain’t Wikipedia entries. Lives never conform to a tidy narrative arc — even one as dramatic as Aretha Franklin’s. With Respect, screenwriter Tracey Scott Wilson and director Liesl Tommy did an admirable job condensing 20 years of the Queen of Soul’s tumultuous life into a mere two-and-a-half hours. Thanks to some impressive research and Jennifer Hudson’s captivating performance as the late icon, the film treats viewers to a host of her most transformative moments. You’re in the studio as Franklin finds the groove for her breakthrough hit, “I’ll Never Love a Man (The Way That I Love You).” You’re in the front row as she blows the roof off Madison Square Garden with “Respect.” You’re backstage as she prepares to record her landmark live album, Amazing Grace. The career highlights are all there … but naturally, there were some moments in the movie that strayed from reality. Timelines are skewed, characters are condensed, and fibs are told out of, well…respect. Read on as we separate fact from fiction. [Spoilers Ahead!]

The father of Franklin’s first child remains a mystery.
Respect opens as 10-year-old Franklin (played by Skye Dakota Turner) is roused from her bed and led downstairs to sing at a house party hosted by her father, Rev. C.L. Franklin, the so-called “Man with the Million-Dollar Voice” whose fiery sermons had made him a Detroit celebrity. Guests such as Duke Ellington, Ella Fitzgerald, Art Tatum and Sam Cooke drink, smoke, cuss, and generally raise hell as the little girl performs for their amusement. The scene establishes Franklin’s mature talent but also hints at the adult world in which she came of age. (Ray Charles, no stranger to debauchery, would describe Rev. Franklin’s traveling ministry as a “sex circus.”) Later, during another party, Franklin is awoken by a grown man who enters her room and offers to be her “boyfriend.” Through a series of flashbacks, it’s implied that Franklin was raped, resulting in a pregnancy.

In reality, Franklin gave birth to her first son when she was 12 years old. Named Clarence, his father has never been known for certain. For years, rumors circulated that an adult family friend was responsible — an allegation the family has repeatedly denied. The singer herself never named her son’s father publicly, but in her 1999 memoir From These Roots, she said he was a boy she met at a local skating rink. (She refers to him only as “Romeo.”) Journalist David Ritz, who co-wrote Franklin’s memoir and also penned an unauthorized 2014 biography on the singer, wrote that Clarence’s father was a classmate of Franklin’s named Donald. Circumstances were further muddied when a will, purportedly handwritten by Franklin, surfaced after her death. The document names Clarence’s father as Edward Jordan Sr., another local boy with whom she shared her second son, Edward, born when Franklin was 15. However, the veracity of the will is debated. 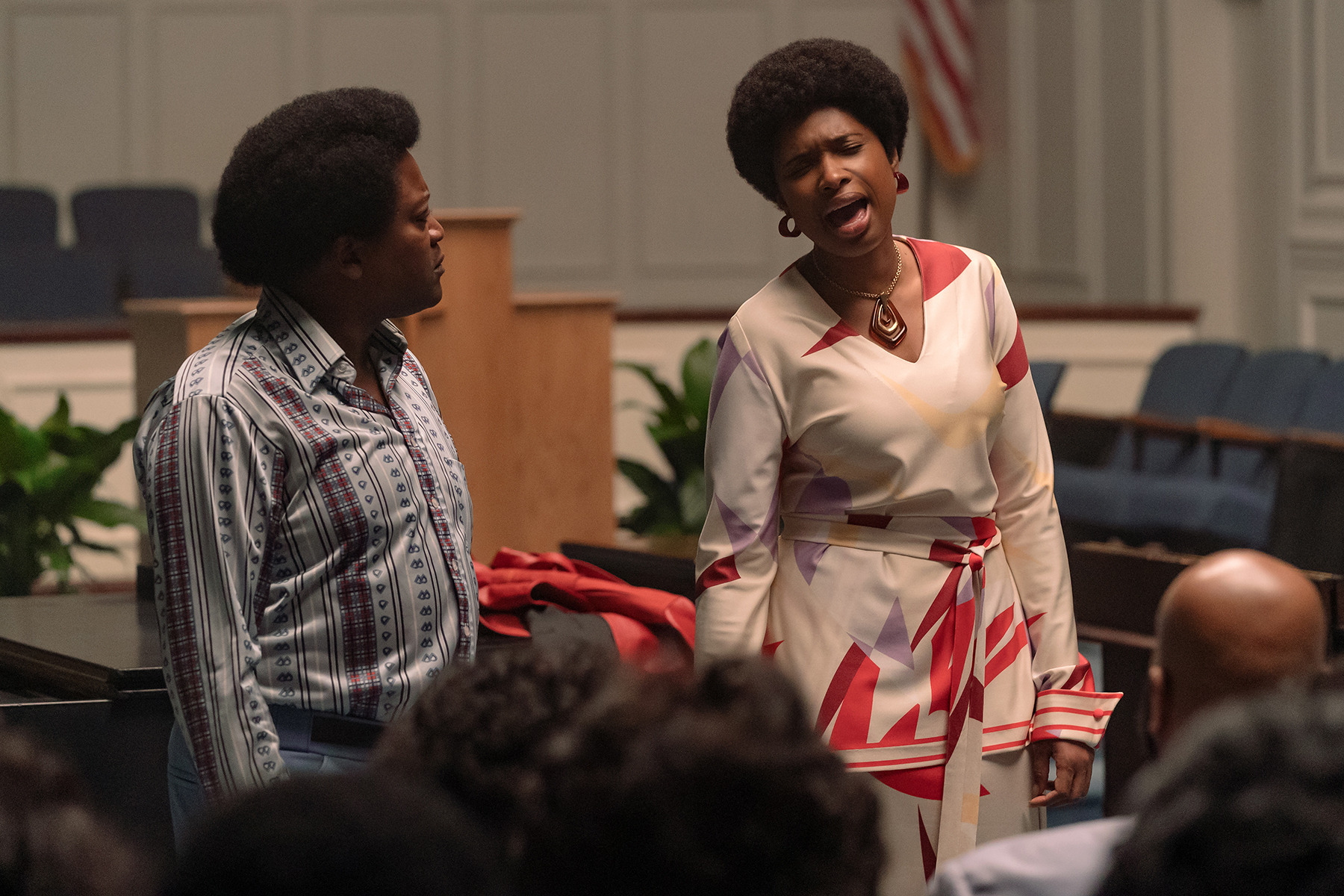 Tituss Burgess and Hudson in ‘Respect.’

Franklin’s Columbia recordings weren’t her first records.
Respect justifiably treats Franklin’s contract with Columbia Records in 1960 as a crucial turning point in her life and career. But interestingly, the 18-year-old already had several recordings to her name by the time she signed with the music behemoth. In 1956, when Franklin was 14 years old, she was recorded singing live at her father’s New Bethel Baptist Church in Detroit by the local independent label J-V-B Records.

Her debut single was a preternaturally powerful rendition of “Never Grow Old” (backed by “You Grow Closer”) which featured Franklin accompanying herself on piano. She would revisit the hymn many times over the course of her career, most notably as the closing track on her landmark 1972 live album, Amazing Grace.

J-V-B issued a second single from these live recordings, a double-sided version of “Precious Lord,” in 1959. These four tracks, plus Franklin’s version of “There Is a Fountain Filled with Blood,” were also included on the 1956 J-V-B compilation record, Spirituals. Jennifer Hudson performs “There Is a Fountain Filled with Blood” in Respect while standing at her father’s pulpit — perhaps a subtle nod to this era of her career.

Dinah Washington didn’t actually flip a table after Franklin sang one of Washington’s signature songs at a nightclub.
Mary J. Blige makes a memorable appearance in Respect as vocalist Dinah Washington, whose string of 1950s jazz hits made her one of the most popular black recording artists of the era. Franklin’s relationship with Washington dated back to her childhood in Detroit, when “Miss D” was a frequent guest at her father’s house parties. When Franklin learns that her old family friend is in the audience at one of her New York City club dates, she decides to honor Washington with a rendition of her signature song, “Unforgettable.” Unfortunately, her attempt at a tribute badly misfires. Washington assumes the young singer is trying to show her up and flips her table in fury. “Bitch, don’t you ever sing the Queen’s songs when the Queen is right in front of you!” she screams at the mortified Franklin.

The riveting scene is based largely in truth, but Franklin wasn’t on the receiving end of Washington’s outburst. It’s based on a real-life incident that occurred when Washington attended a concert by another up-and-comer, Etta James, who dared to perform one of Washington’s songs to her face. Franklin and Washington were slightly more cordial, but things weren’t always easygoing between them. In his book Respect, David Ritz details one of Franklin’s early shows in Detroit when Washington paid her a visit backstage and criticized her messy dressing room. “Aretha deeply resented the remarks and thought Dinah was acting like a diva,” he wrote.

Frankin married husband Ted White at the start of her recording career — not after years of failed albums.
As in the movie, Franklin really did meet her first husband, a Detroit wheeler-dealer named Ted White (played by Marlon Wayans), at one of her father’s house parties. However, this brief encounter occurred in 1954, when Franklin was just a teenager, and not on the eve of her Columbia Records deal in 1960. She would later recall that White arrived at her home with Dinah Washington, who got too drunk and had to be carried out at the end of the night. 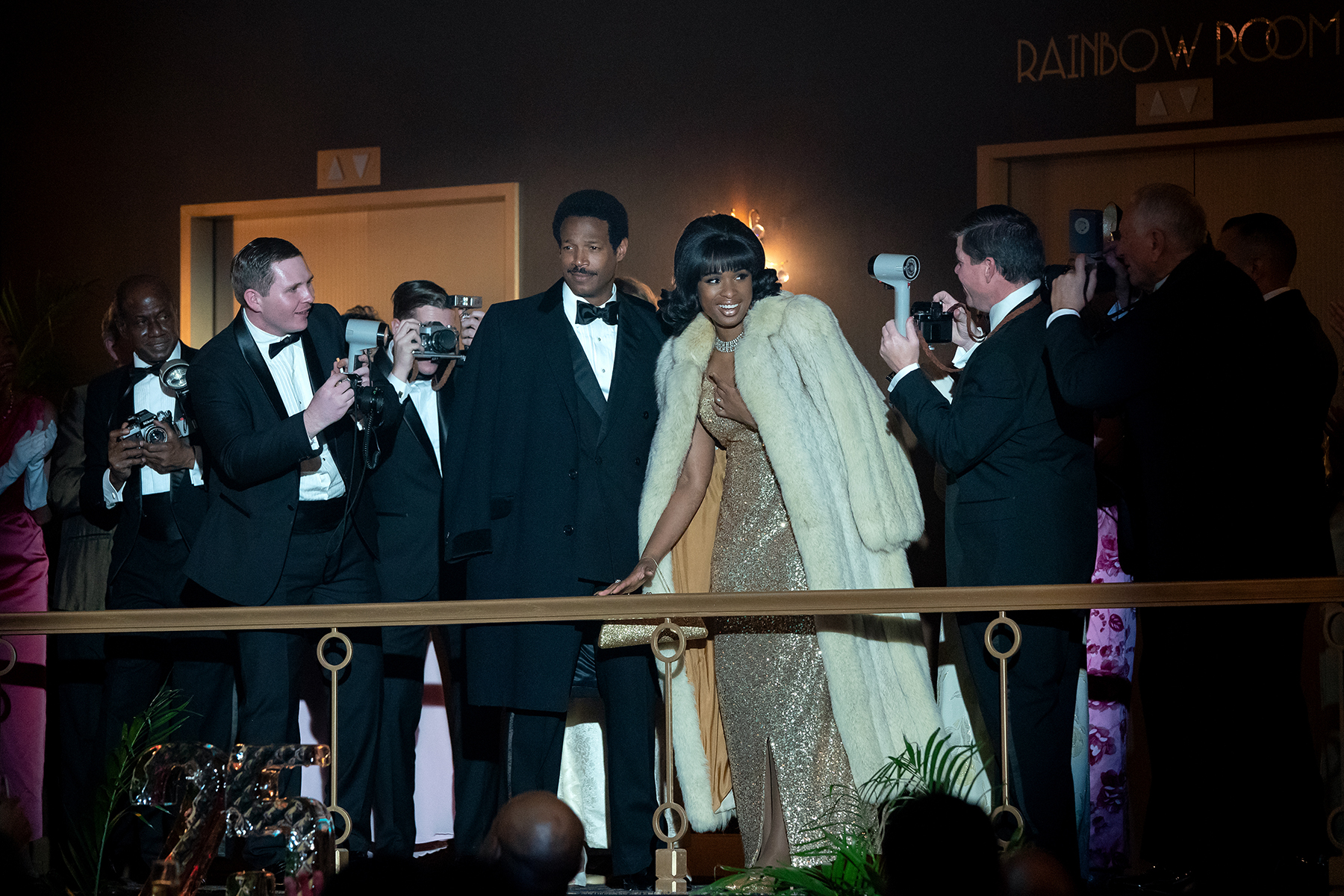 The film continues to play fast and loose with their relationship timeline, making it seem as if the pair got together well into her recording career in the mid-1960s. In truth, they began their affair in 1961, the year she released her first album. Within months they were married, and shortly thereafter he became her manager. One of his first acts was to persuade Franklin to jettison Columbia producer John H. Hammond (portrayed in the film by Tate Donovan) after her sophomore album, The Electrifying Aretha Franklin.

Called a “pimp,” “hustler,” and “one of the slickest operators in Detroit” by an assortment of Franklin’s friends, White was notoriously controlling of his wife’s career. On the big screen, White is presented as emotionally abusive towards Franklin and frequently violent. This characterization is corroborated by a disturbing number of reports in biographies and profiles. The tumultuous relationship came to an end in 1969. According to biographer Mark Bego, the pair only spoke twice after that.

Producer Jerry Wexler didn’t dub Franklin “the Queen of Soul.”
As Franklin ascends to superstardom in Respect, Atlantic Records producer Jerry Wexler stands before a phalanx of news cameras and declares her “the Queen of Soul.” The scene implies that it was he who coined the iconic honorific, but the title actually came from a pair of Chicago disc jockeys. As Franklin began her concert at the Regal Theater in April of 1967, DJs Pervis “the Blues Man” Spann and E. Rodney Jones appeared onstage to perform a mock “Queen of Soul” coronation, complete with bejeweled crown. “I was delighted and thrilled,” Franklin would recall. “Thereafter the journalists and people started using the term.”

Franklin duetted with Cissy Houston on “Ain’t No Way” and not her sister, Carolyn.
Respect omits several key figures from Franklin’s life and career. Among them are Tom Dowd and Arif Mardin, two multi-talented studio gurus whose production, arrangement and engineering work was a crucial part of Franklin’s late Sixties Atlantic Records golden years. But perhaps most glaringly absent are the Sweet Inspirations, the legendary R&B collective who sang backup on many of Franklin’s hits and countless tours. The group was fronted by Cissy Houston (mother of Whitney), who lent her stunning contralto vocals to Franklin’s soaring ballad “Ain’t No Way.” The moment was a highlight of Houston’s storied career, yet in the film it’s Franklin’s sister Carolyn (who, to be fair, wrote the song) who sings the elegant countermelody.

It’s worth noting that Houston indirectly inspired one of Franklin’s most beloved recordings. During a break in a recording session for 1968’s Aretha Now, the Inspirations began goofing around on a version of Burt Bacharach’s “I Say a Little Prayer,” which had recently been recorded by Houston’s cousin, Dionne Warwick. Franklin liked what she heard and the group worked out an arrangement on the spot.

Franklin didn’t reject an exclusive Beatles track — but she didn’t take advantage of it, either.
Late in the film, Franklin and Wexler have a tense discussion about which songs she should tackle during an upcoming session. The producer reminds her that the Beatles have sent a demo of a new track for her consideration, offering her the chance to record it first. Though not named in the film, the tune was the soulful modern hymnal “Let It Be,” which Franklin rejects due to its supposed Catholic overtones. “I’m a Baptist,” she indignantly tells Wexler in the scene.

In reality, Franklin did record “Let It Be,” which Wexler would (somewhat dubiously) claim had been written specifically for her. But it took some coaxing. “She held off for over a year,” he wrote in his memoir, Rhythm and the Blues. Perhaps she warmed to the idea after learning that the “Mother Mary” namechecked in the song wasn’t a biblical reference but a lyrical tribute to Paul McCartney’s late mum, Mary. Whatever the case, Franklin’s rendition ultimately surfaced on the album This Girl’s Love with You in January 1970, preempting the Beatles version by nearly two months. But curiously, she opted not to release the unheard Lennon-McCartney cut as a single, instead choosing another Beatles cover for the album, “Eleanor Rigby.”

By this point, the Beatles were growing restless. “Paul and John knew they had a hit [and] got tired of waiting for her,” Wexler told David Ritz. They released their own version as a single in March, which quickly shot to the top of the charts and forever marked the song as theirs. Wexler would declare Franklin’s “Let It Be” as “magnificent,” telling biographer David Ritz: “It could have been another one of her signature songs, but her equivocation proved costly.”

The singer’s father didn’t give her an emotional pep-talk before recording her legendary Amazing Grace live set.
The film culminates with Franklin reconnecting with her musical roots through a series of incendiary gospel performances at Los Angeles’ New Temple Missionary Baptist, captured on her seminal 1972 live album Amazing Grace. In Respect, it’s a reunion with both her Heavenly father and her Earthly father, as she and the Rev. C.L. Franklin share a touching moment just before showtime. “You taught me every song I’m singing today,” she tearfully admits to her dad.

Sadly, this sweet pre-show reconciliation never took place. The Rev. C.L. Franklin arrived on the second day of the concert, just in time to record his remarks for the double-disc set. According to musical director Rev. James Cleveland, Franklin had completely forgotten to invite her father until the very last minute! Still, he offered some kind words to his daughter from the pulpit. “This music took me all the way back to the living room at home when she was six and seven years of age,” he told the congregation. “I was just about to bust wide open. You talk about being moved — not only because Aretha is my daughter, Aretha is just a stone singer.”