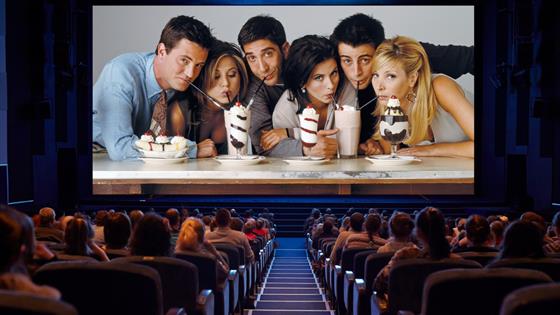 The one where Monica and Chandler reunite will always be one of our favorites.

Late on Thursday, Friends alum Courteney Cox took to Instagram to share a rare selfie with her onscreen husband Matthew Perry. “Guess who I had lunch with today…” the actress gushed to her nearly six million followers. “I KNOW!! Could I BE any happier? #realfriends.” (ICYMI, the duo played pals-turned-soulmates on the cult favorite sitcom.)

In fact, the hangout caught the attention of several of their A-list friends. “High quality content!” raved Eric Stonestreet. Chimed in Allison Janney, “Love you Matthew.”

After all, while the ’90s cast often share snaps from their reunions (much to the delight of fans), Perry has worked to keep a relatively low profile in recent years.

Back in September 2018, the actor ended a six month Twitter hiatus by revealing he spent three months in the hospital following a gastrointestinal surgery to repair a ruptured bowel.

Nearly a year later, he once again made headline news for totally nailing social media. When photos surfaced of the 50-year-old enjoying an afternoon stroll through NYC, the focus suddenly (and surprisingly) turned to his “long,” “dirty,” and unkempt fingernails.

“I’m getting a manicure this morning. That’s okay right?” he clapped back on Twitter. “I mean it says man right in the word.”

Guess who I had lunch with today….I KNOW!! Could I BE any happier? #realfriends

Guess who I had lunch with today….I KNOW!! Could I BE any happier? #realfriends

Naturally, he was referencing the notorious Friends scene where Chandler and Rachel get their nails done at the salon. Because, after all these years, not even he can quit his love for the show!

Now, to see more of the cast’s reunions that will have you begging for a reboot, pivot on to the pictures below. Need more? Well, be thankful this year we’re being gifted a return to the big screen. Eight Thanksgiving-themed episodes will hit the movie theaters screen nationwide on November 24 and 25.

Could we be any more excited? 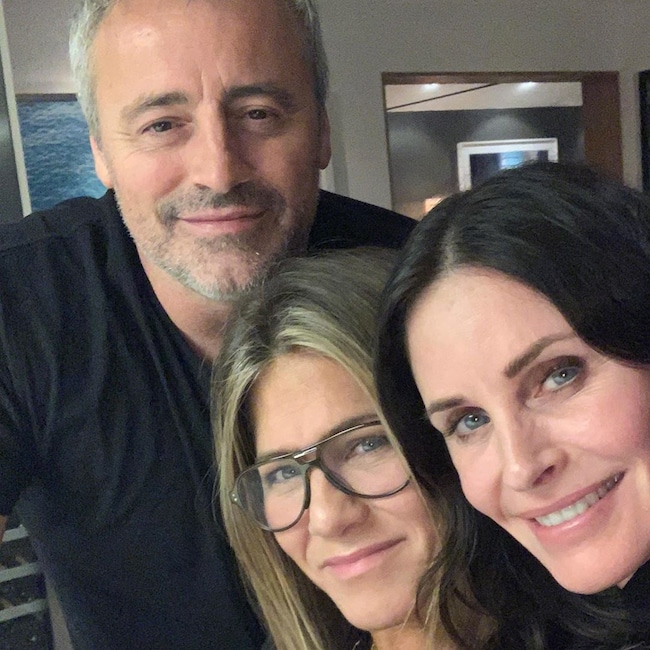 Joey, Monica and Rachel reunited for a fun night in October 2019. 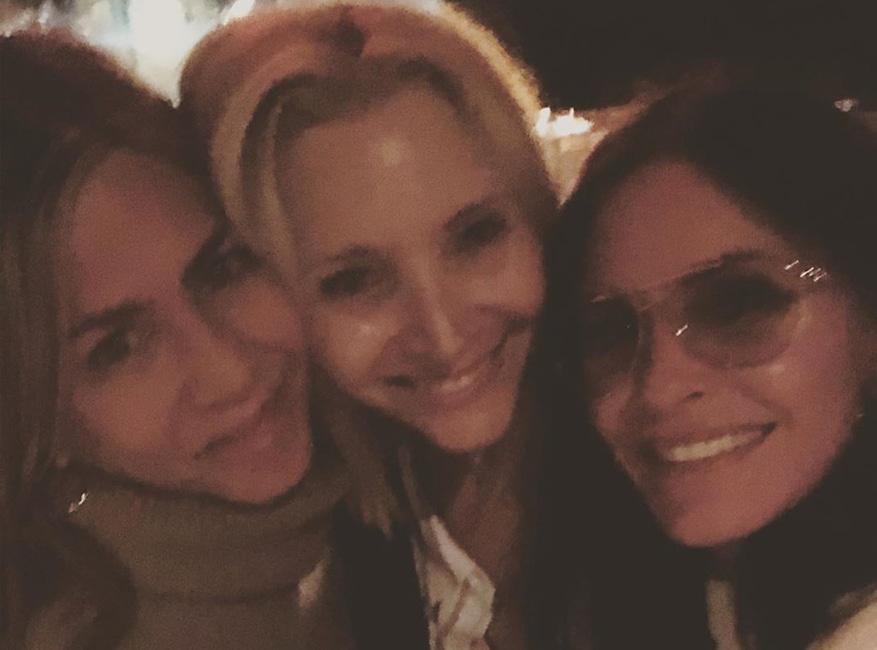 “Halfway there… #girlsnight #?” Kudrow wrote in June 2019, teasing fans about a possible reboot. 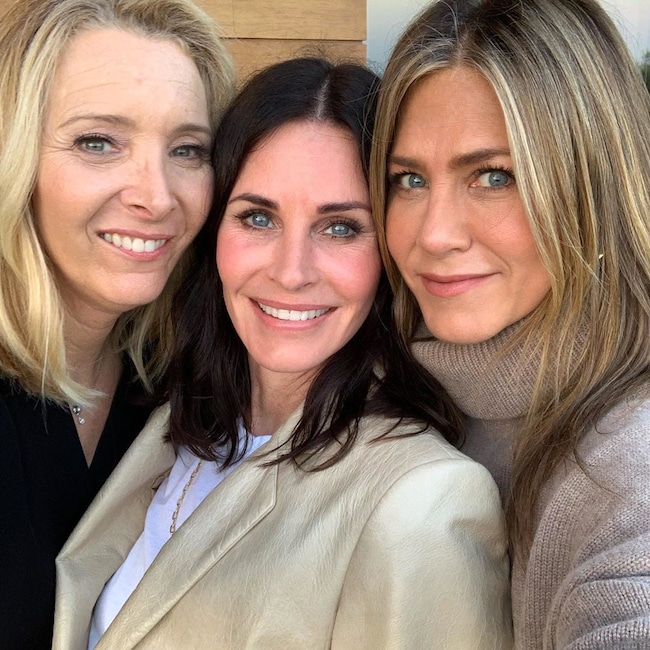 The Friends ladies get together for Cox’s 55th birthday dinner in June 2019. 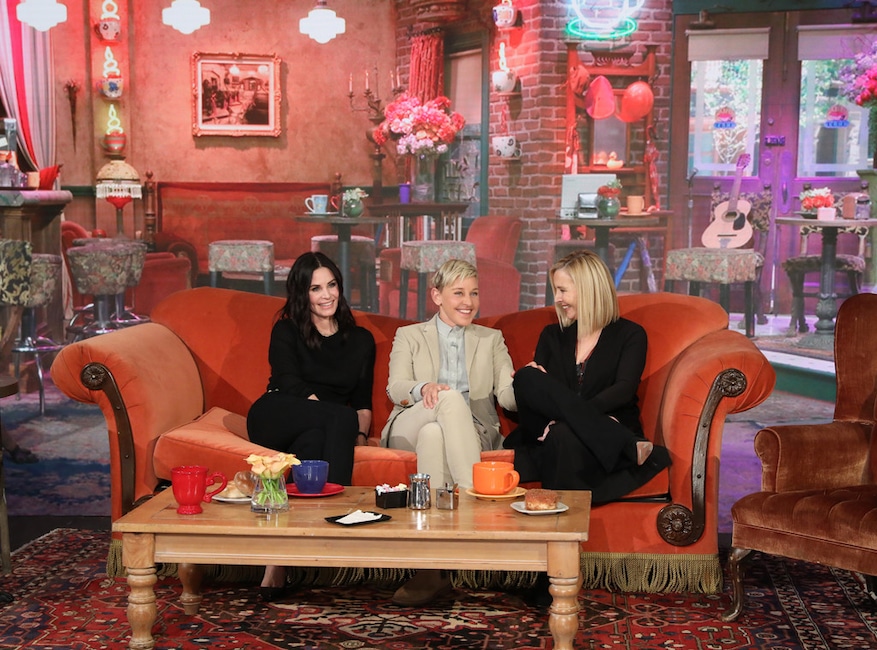 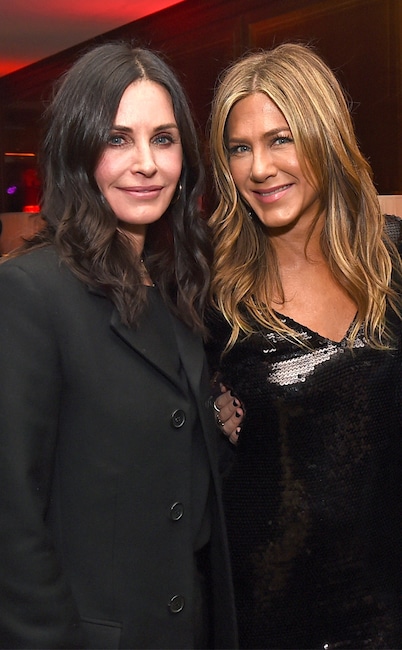 In December 2018, Cox supported her friend at premiere event for her Netflix movie Dumplin‘. 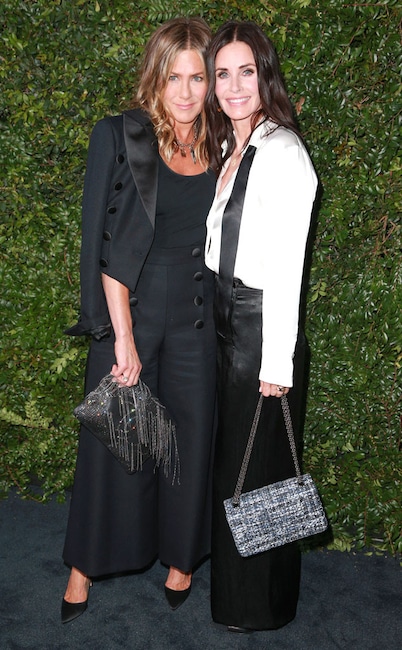 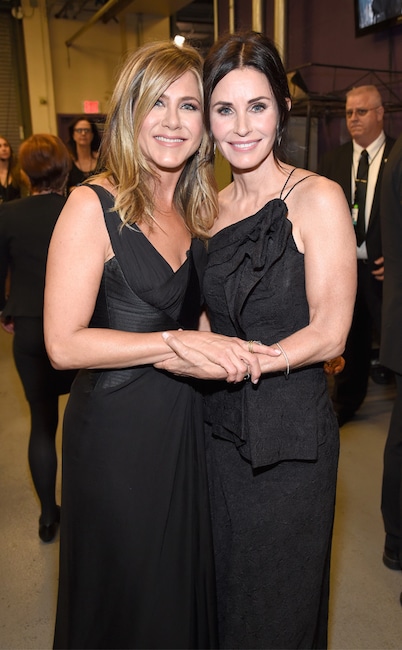 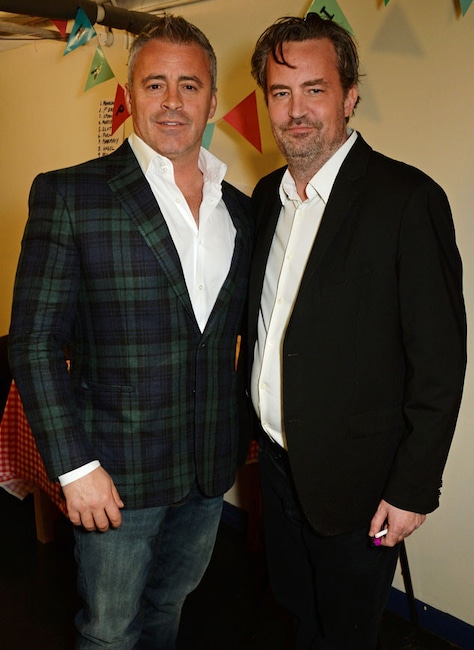 In 2016, the two onscreen roommates reunited in London, baby! LeBlanc caught up with Perry backstage after the latter star’s performance in his play The End Of Longing, which marked his playwriting debut. 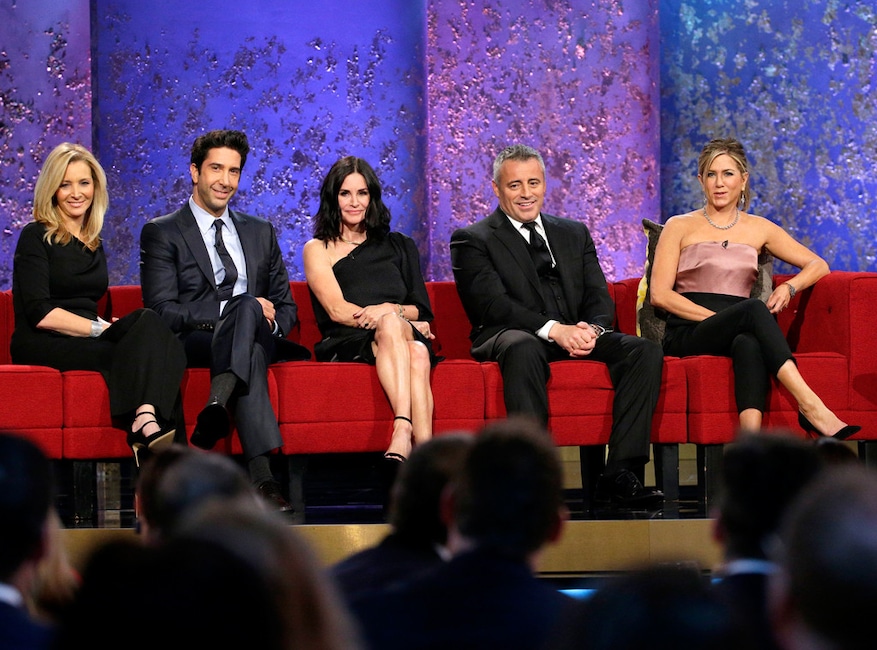 Lisa Kudrow, David Schwimmer, Courteney Cox, Matt LeBlanc and Jennifer Aniston reunited for a 2016 NBC special dedicated to Friends director James Burrows. Matthew Perry was unable to attend as he was in London to star in his play The End of Longing. He did, however, appear in a videotaped message to introduce his former cast mates. 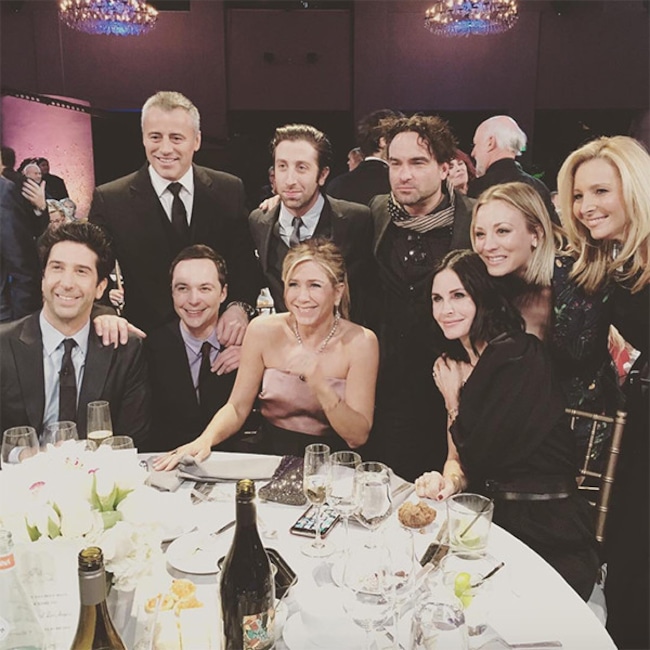 Kaley Cuoco  was overjoyed to get a picture with the cast. She wrote on Instagram, “Ummmm NIGHT MADE. Can’t breathe #friends meets #bbt @bigbangtheory_cbs I died and went to heaven.” 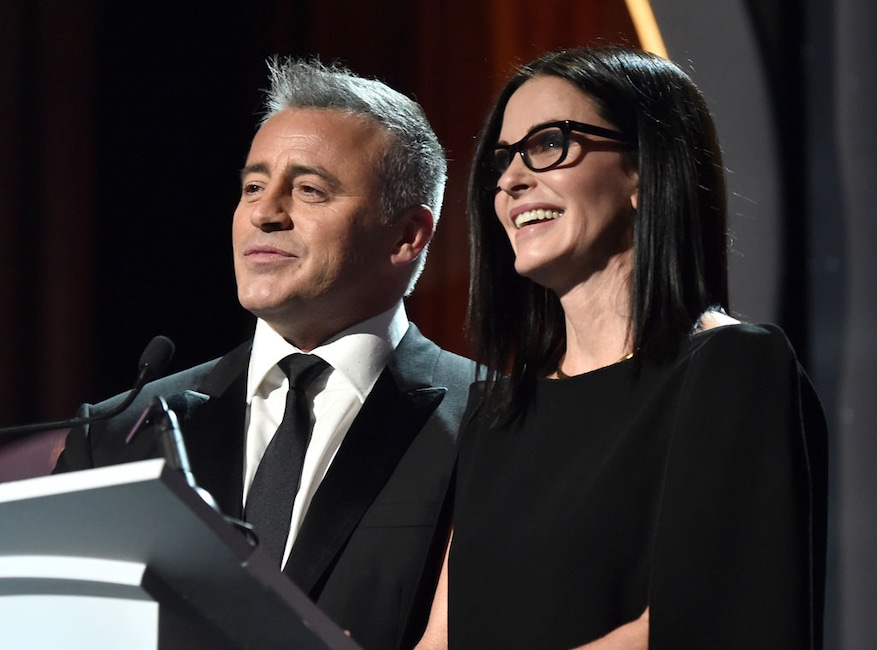 The two reunited at the 2016 WGA Awards,  appearing together onstage to present an award. 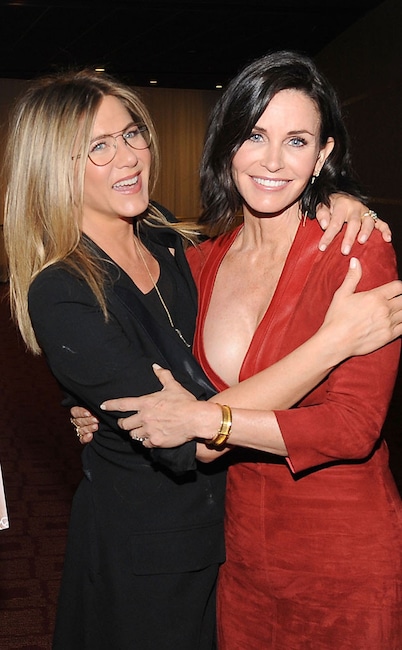 The two attended a screening of Just Before I Go, which Cox directed, in 2015. 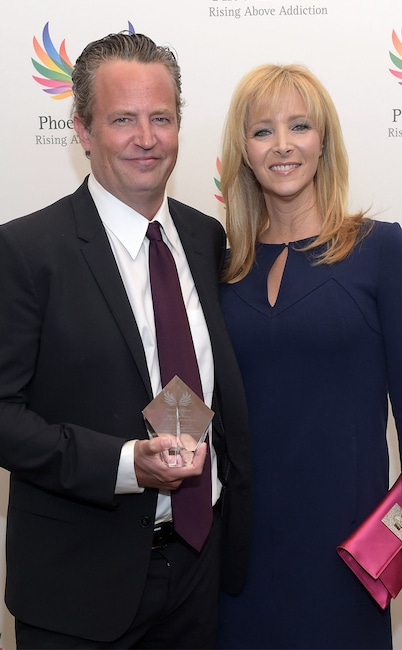 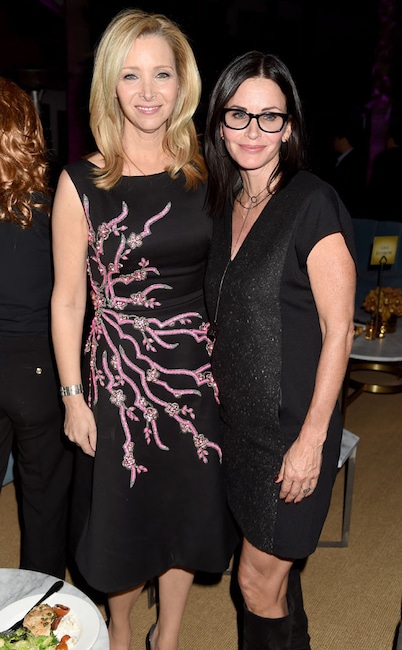 In 2014, Cox joined Kudrow at a premiere event for season two of the HBO series The Comeback. 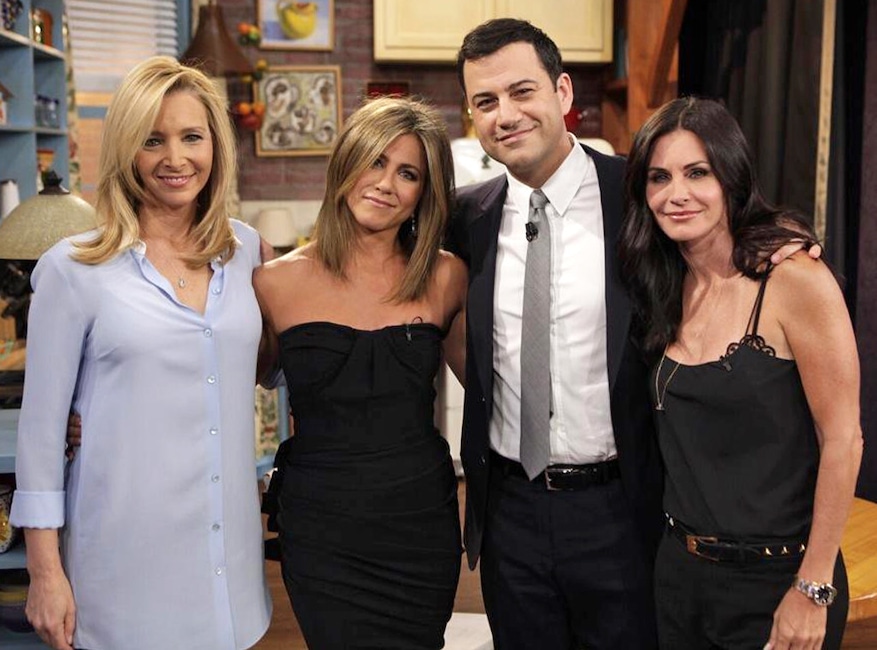 Also in 2014, the ladies of Friends reunited on Jimmy Kimmel Live!… 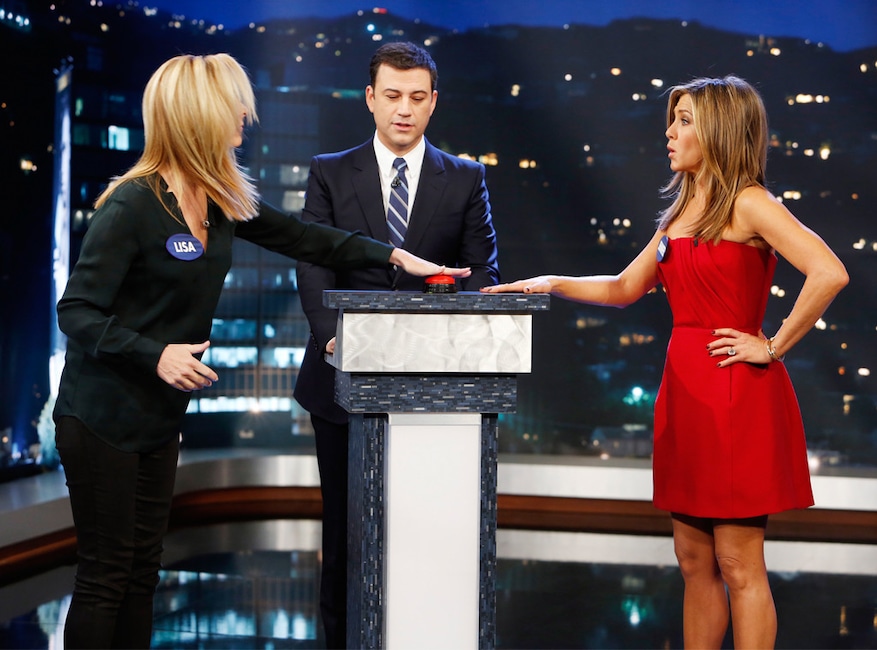 …where Aniston and Kudrow competed against each other. 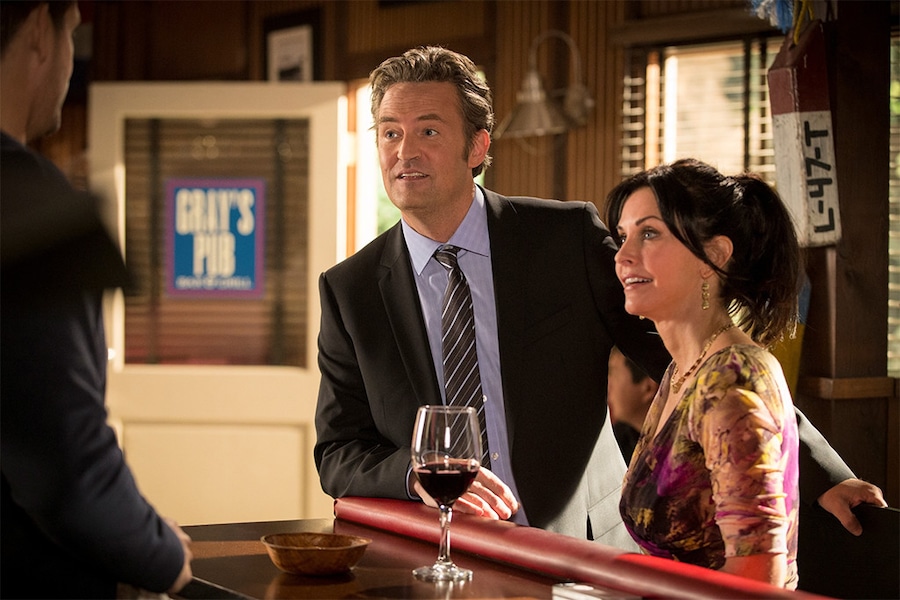 In 2014, Perry returned the favor and guest-starred on Cox’s show Cougar Town. 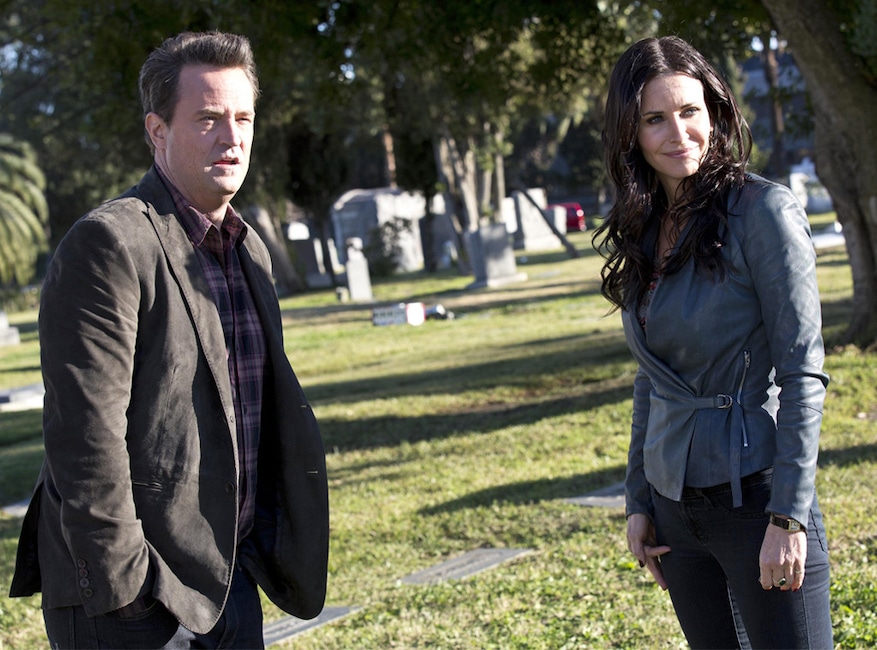 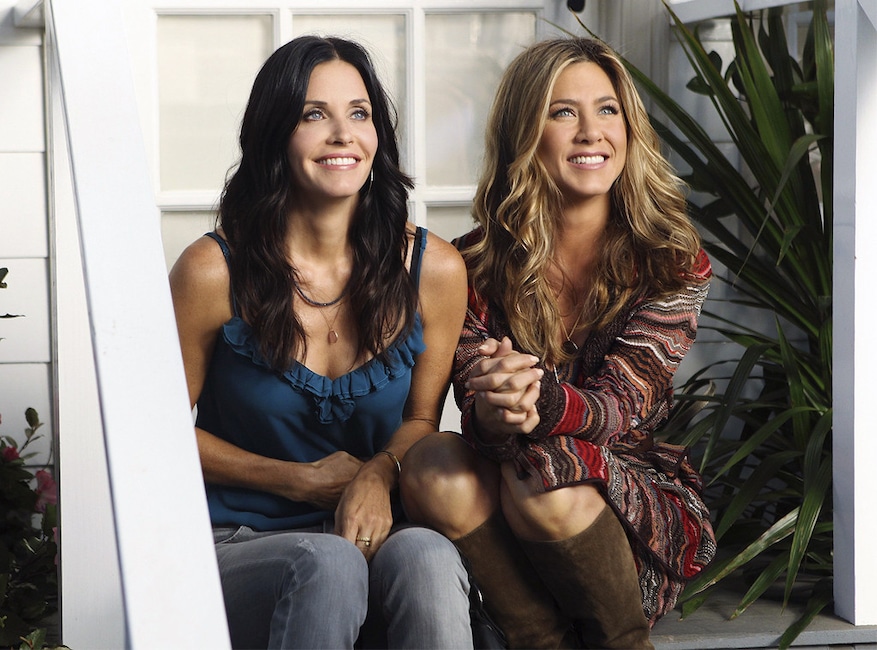 In 2010, Aniston guest-starred on the season two premiere of her Friends co-star’s show Cougar Town.

Don’t miss E! News every weeknight at 7, only on E!