Emmerdale’s vicar Harriet Finch (played by Katherine Dow Blyton) has been sneaking around with DI Mark Malone (Mark Womack) for the last couple of months, despite being engaged to Will Taylor (Dean Andrews). The three all know one another, with their paths crossing several times in the past, and more recently too. During tonight’s instalment of the popular ITV soap, Dawn Taylor (Olivia Bromley) became acquainted with Malone, and it seems Harriet’s wedding will not go ahead, no matter how much she or Will would like it to.

A few months ago, Harriet meet with Malone on the outskirts of the village and warned him against coming near her or her family.

Her threat landed on deaf ears as the corrupt cop upped his control and viewers saw Will hospitalised as a warning to not double-cross him.

Despite the danger Malone brings into Harriet’s life, she cannot stay away, and the pair reignited their romance.

When Will vowed to change once more, and then dropped down on one knee, Harriet was unable to say anything but “yes” to his marriage proposal. 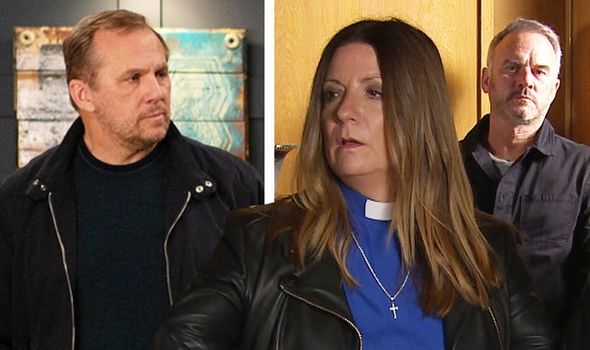 Tonight, Harriet’s doubts about marrying Will emerged during a conversation with Laurel Thomas (Charlotte Bellamy).

She was also seen actively avoiding Will and Dawn too.

Her step-daughter tried to make plans with Harriet, but was interrupted by Malone.

Talking on the phone outside the cafe, Dawn said to Harriet: “Lucas has binned me off – he’s gone for tea at a mates.

“So I thought we could do some strategic planning – about your wedding of course! 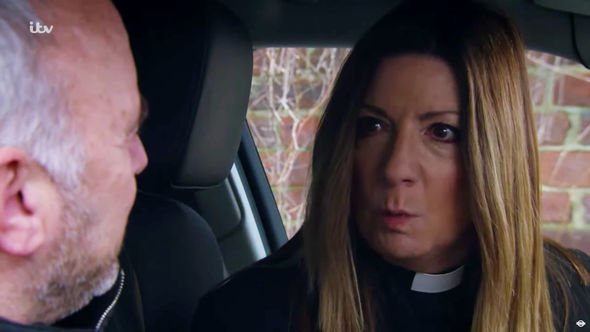 “I have seen some lovely scarlet roses in town and Dad loves all things red, so, not that he gets a choice because it’s all about the bride isn’t it!” She continued.

“Harriet, you could sound a bit more enthusiastic! How often do you get married?

“I’m not having a go – alright, okay, you finish your sermon, I’ll get some food and we can plan later on,” Dawn miserably remarked.

Malone was seen walking up the road behind Dawn before stopping in front of her.

“Can I help you mate?” Dawn said and he replied: “Yes sorry, couldn’t help overhearing in. Harriet, is that the local vicar by any chance? 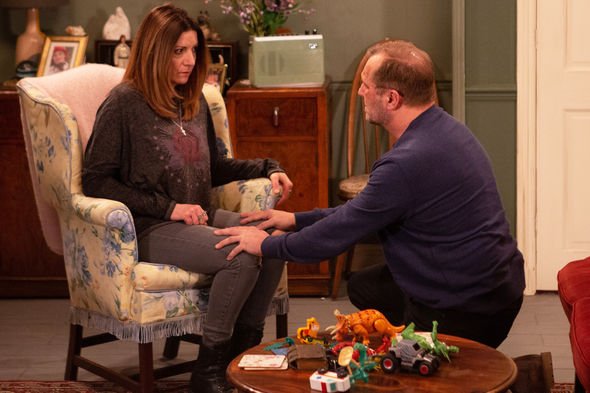 Before adding: “Friend of yours?”

“Engaged?” Malone exclaimed. “Had to happen sooner or later I guess. He’s a lucky guy, she’s quite a catch.”

Confused, the mother of one asked: “How do you know her?”

“Mark?” Dawn reiterated and Malone clarified: “Yes, or Detective Inspector Malone if you want to be formal.”

It didn’t take long for Dawn to realise who the man in front of her was and she quickly made her excuses and left.

Official soap spoilers for this week have already revealed how Dawn will tell Harriet about Malone’s appearance in Emmerdale.

And while Harriet will reassure Dawn that Malone is nothing for them to worry about, she can’t be certain.

After all, Dawn found herself embroiled in Malone’s dodgy drug deal, when she had to collect the gear off boyfriend Billy Fletcher (Jay Kontzle) and Cain Dingle (Jeff Hordley) after her father gave them a tip off they were going to be flagged down by the police.

With Malone extremely surprised by Dawn telling him Harriet was engaged, it is clear he had no idea about the woman he is sleeping with still being involved with Will.

Could he rumble up a plan to ruin Harriet’s big day?

Emmerdale airs Monday and Wednesdays at 7pm on ITV.