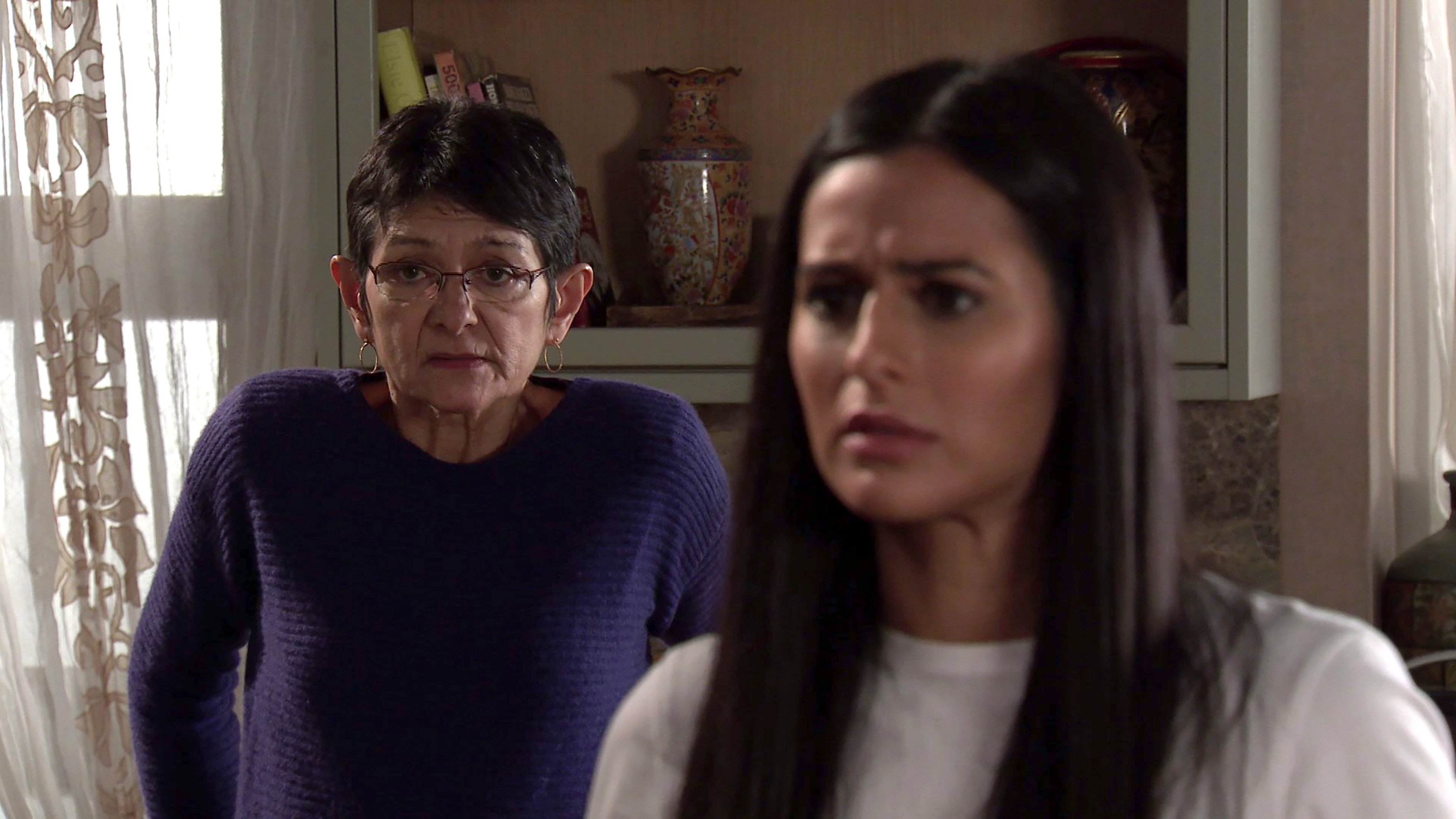 Yasmeen Nazir’s (Shelley King) abuse may have come to an end following Geoff Metcalfe’s (Ian Bartholomew) death in Coronation Street, but as we’ve seen these past few weeks, her torment is far from over.

She’s suffered panic attacks, hallucinations of Geoff, and has continued to grow paranoid about doing the wrong thing at risk Geoff will be there to torture her afterwards.

Coming up, there’s no escaping Geoff yet as Yasmeen is shocked to discover he has left her drowning in debt, and as Shelley King recently revealed, Yasmeen learning of this news only adds to the guilt she is feeling:

‘This is something else that she has put to the back of her memory because she did tell Imran that Geoff got her to sign things and she just signed anything he asked her to. She is intelligent enough to know she has done those things and she blames herself for doing those things, she questions why she did those things. There is a bit of her who believes that she deserves punishment.

The most difficult thing when you come out of a situation, like the one Yasmeen was in, is the voice that says why did you allow yourself to do this? There is also a lack of sympathy from people who have never known what it feels like within a controlling relationship, they don’t believe they could ever fall into this category and that is also another reason why she thinks Elaine is the only person she can talk to.’

To make matters worse, Yasmeen and Alya (Sair Khan) are horrified to discover bailiffs at the front door. Yasmeen is slowly growing stronger, but is certainly in a vulnerable position, so can she cope with everything that is happening? Shelley added:

‘It is going to push her over the edge. Suddenly all those fears that she has, all those things that have been locked away in a box in the back of her head suddenly exist for real because there is a man at the front door saying he is there to take everything away. Also, Alya has found what remains of a whole pile of final demands and bills. We also find out that she has also thrown some away. The self-hatred returns and she becomes Geoff in her head putting herself down. He is telling her she is an idiot and a fool she has lost everything because of her own actions. It is so sad that she believes that.’

Elaine (Paula Wilcox) has been through exactly what Yasmeen is experiencing, so is providing the best advice for her when it comes to trying to get rid of Geoff. Shelley explained how much Elaine’s friendship is truly helping Yasmeen:

‘She is somebody who has had that same experience but they are not alike. Elaine is a much more confident person by the time we have met her. She is many years on from where Yasmeen is. So Yasmeen has this person around her who seems to be quite positive now, even though Yasmeen has seen her in court crumbling having to face Geoff, she has still rallied to the cause and rushed to Yasmeen’s aid.

She is a fighter and Yasmeen sees her as a beacon for the possibility of a future for herself.’