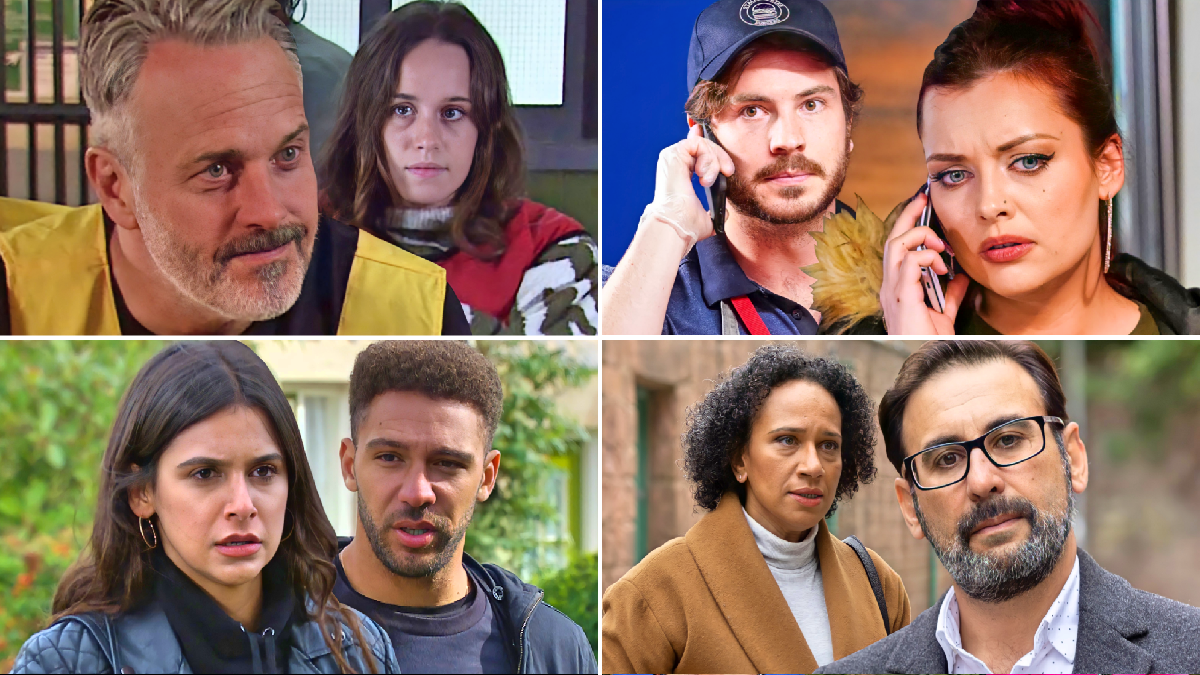 Shocking discoveries are made and old faces return in what promises to be another compelling week in the land of soap.

Debbie Webster takes it upon herself to try and get Faye Windass out of prison in Coronation Street, and her mission results in her visiting Ray Crosby.

Whitney Dean, meanwhile, is on a mission of her own in EastEnders, desperate to work out what Gray Atkins is hiding when she makes a shock discovery about his job.

Emmerdale’s Meena Jutla is left seething after learning David Metcalfe has jet off on holiday with Victoria Barton, while Al Shahzad sees a face from the past in Hollyoaks.

It’s set to be an explosive week for some of soap’s finest, and here’s everything you’ve got to look forward to.

1. Kelly beds down in a shop doorway for the night, and when her phone battery dies, she plugs it in in a hotel foyer. The receptionist, however, questions her, but a guest named Alan comes to her rescue. Alan tells her she can stay a his anytime. Kelly hurries out, but when all of her belongings at the shop doorway have been stolen, she knocks on Alan’s bedroom door.

2. Aadi assures Kelly she can stay at his. However, Kelly soon overhears Asha reiterating that she’s not welcome on the street, and thus she tells Aadi there’s been a change of plan, claiming she’s staying at her mum’s. Aadi, however, is suspicious.

3. Johnny’s funeral takes place. Carla, then Jenny, each gives a heartfelt eulogy. At Johnny’s wake, Jenny knocks back the wine while Carla watches with concern. Jenny tells Daisy that she’s the sole beneficiary in Johnny’s will and he’s left her £20k.

4. Sam’s face lights up at the sight of his telescope, but he’s not too happy when Max and Lily join him. Lily locks Sam out on the balcony of the flat, and dangles the key in front of him. As she taunts Sam, however, her lollipop comes away from the stick, and she starts to choke. Sam watches, frozen in horror. Will Sam overcome his silence and save Lily?

5. Max reveals he’s currently working on a film in his own time, and as the week comes to an end, he puts the finishing touches to it, before uploading it onto his social media. Summer watches the film with Roy and Nina, and they’re appalled to realise it’s a documentary of the night of the sewer collapse, suggesting a conspiracy theory linking Natasha and Johnny’s deaths. Summer demands Max take it down at once – especially before Sam sees it.

6. Tim is worried about Faye after paying her a visit in prison, and Sally confides in Debbie, suggesting a visit to see Ray to see if they can get him to confess to sexual assault. Debbie does just that, visiting Ray behind bars, and tells him she’s going to repot him to the police for the death of Johnny Connor if he fails to plead guilty to sexually assaulting Faye.

7. Daisy steps in to look after Bertie when the childminder lets Daniel down. However, she takes selfies of Bertie and posts them online. Adam suggests that she’s using the child to boost her internet profile. Daniel, however, thanks Daisy, and is keen to spend more time with her.

8. Stacey asks Kheerat to speak to Suki but she’s interrupted by a phone call and panics. She finds Eve drunk at the café, having a go at Suki as Eve reveals that she’s meeting her probation officer. Stacey takes Eve home, desperate to sober her up. When the probation officer arrives, Jean covers for her. Suki and Kheerat appear as the probation officer is leaving. Kheerat’s angry that Eve had a go at his mother and Suki tells the Slaters they have to leave by the end of the week

9. Aaron is annoyed to see that Bobby has come to Harvey’s for lunch. Things become tense when Aaron starts to question Bobby about his religion. Bobby, however, is prepared and responds well. Aaron insists on taking the bins out, piquing Harvey’s interest, and he finds Aaron’s bloodied shirt! Harvey demands answers. Aaron tells his dad it was just a fight, but he lied to the police to say he was with him the night before. Harvey’s conflicted as Aaron ask him to be his alibi.

10. Phil arrives back from Portugal to chaos. Kat asks him if the Slaters can live with him but he says no. Jean overhears and tells Kat she’s a good person but they couldn’t mess up her relationship. Later, Jean has a word to Phil – don’t make Kat choose between him and her family

11. Gray wants to tell the kids about the pregnancy but Chelsea isn’t ready yet. Later, Chelsea arrives home shocked to find Jack and Kim moving her into Gray’s and that Gray has told the kids about the new baby. Chelsea is furious Gray moved her in without her knowledge, but she softens as she sees he’s bought her an engagement ring,.

12 Whitney calls Gray’s work, but is she’s shocked when she’s told he doesn’t work there anymore. Gray is working at the burger bar when he gets a call from Whitney, he lies about his whereabouts but she can tell where he is. Whitney intercepts Mia and Chelsea as they arrive home shopping. She’s torn over whether to tell Chelsea the truth about Gray

13. Jean accidentally breaks Kat’s new ceramic leopard. Harvey and Vinny help  Jean fix it. Sparks fly between Harvey and Jean but when Aaron appears and makes a comment about them dating, Harvey feels awkward. Harvey and Jean sneak the leopard back to its rightful place. Harvey asks Jean out

14. Dotty is stressed about her mum’s safety so Sonia offers her money to help. Dotty bumps into Rocky and tries to persuade him to get back with Kathy to get more money from Peter.

15. Chloe suggests that she and Noah take their relationship to the next level. Mack offers Noah some advice, keen to get him on-side. But when Charity reveals she doesn’t want Chloe anywhere near her kids, he realises the error of his ways!

16. With too many prying eyes, Noah and Chloe run away, forcing Kerry to swoop into action to track them down. However, she’s soon confronted by two thugs who treated to harm Amy if she fails to find Chloe! Kerry updates Charity, who successfully finds the missing lovers. Charity is adamant that the pair simply cannot be together, while Kerry privately has concerns about returning Chloe to her life of relative captivity.

17. Meena is shocked to learn David and Victoria have gone to Portugal. Livid, she sneaks into Victoria and Amy’s home and proceeds to smash it up! Amy is shocked when she discovers the damage, and soon she calls the police. PC Swirling goes to interview Meena, she denies everything and isn’t arrested.  Amy vows she’s going to prove it was her and it is about to get physical, when Billy intervenes. Meena brands Billy her ‘knight in shining armour.’

18. Al unveils a new staff uniform for the Woolpack team, and making a flirtatious comment towards Chas, who tells him he’s overstepped the mark. He’s apologetic, but when Paddy is called away on a course, he invites Chas
to a business dinner. It appears as if his approach is starting to work on Chas!

19. Aaron is supportive when Ben starts searching for a new job. However, Ben isn’t being fully honest, as he’s applying for jobs on the Cornish coast.

20. Brenda gives Manpreet a piece of her mind over how Rishi has taken their break-up.

21. Verity gets distressing news, as she learns her privacy has been violated due to operation bluebird, but she decides not to disclose her identity to the other victims. Celeste realises something is wrong with Verity when she tells her she doesn’t care about the merger. She manages to get Theresa, Cleo and Verity to patch things up over brunch, but it comes to an abrupt end when Verity storms off after the topic of Misbah and Ali is discussed. Verity calls DS Cohen and asks if she can speak to the other girls affected by operation bluebird.

22.Pearl makes up a lie about being homeless, and DeMarcus quickly offers her a bed at the Deveraux household, but it doesn’t take long before she gets under Martine’s feet. Martine is quickly getting fed up with Pearl, but Felix surprises her, and finds her a perfect distraction – wedding planning. However, Pearl overhears Martine’s complaints and confides in Scott, as she admits she promised Walter to look after his family.

23. Diane has an evaluation, and feels relieved when it’s determined that she most likely has obsessive compulsive disorder. Tony is shocked by Becky’s recent actions, but decides to let it slide for Diane’s sake. Becky’s baby, Henry, shows symptoms of sickness, and Diane’s concerns grow when she refuses to take him to hospital. Becky locks herself away, but when Diane threatens to call social services, she has no choice but to give Henry the medical attention he needs, and soon, she receives some alarming news from hospital.

24. Misbah is shocked to discover that the hospital is honouring Ali with an award for his contributions to oncology. Later, a riled-up Shaq publicly condemns Ali whilst he’s receiving his award. Ali demands a public apology, threatening to report Shaq to the police for assault if he doesn’t comply. Misbah plans to leave the village, but before she does, Sami receives an email from another victim. Afterwards, Misbah makes a formal complaint to the police.

25. Fergus is confronted after someone has video evidence that suggests he’s lied. Later, incriminating messages are discovered, which could put Fergus back in the firing line.