Good Morning Britain’s last programme of the week saw Kate Garraway and Alex Beresford back at the desk, alongside Charlotte – who is the show’s news reporter. The hosts were in good spirits this morning but Charlotte was left cringing at one point when she had to relive a hilarious on-screen mishap ahead of her appearance on Celebrity Catchphrase tomorrow night, where she was seen struggling to answer one question posed to her.

Charlotte is set to appear on an episode of the Stephen Mulhern fronted show which airs on the broadcaster tomorrow.

And today, ITV viewers were shown a preview clip of a moment from the episode.

Charlotte said: “I think we have a clip?” with Alex admitting how he was left “screaming” at the TV during her appearance.

Charlotte warned viewers they would see her “not doing very well” within the clip, which showed her confused by a catchphrase on the programme. 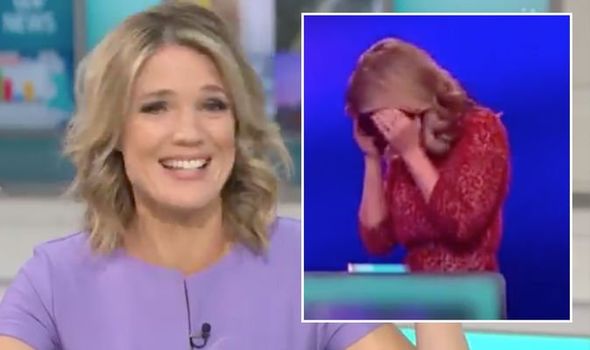 She was presented with a clip of a potty appearing to run in a gym, leading her to say: “What is that? Is it a running potty?”

Charlotte was joined on the show by Coronation Street’s Andy Whyment, who adds: “Is it an exercise potty?”

Stephen is left infuriated by the fact none of the stars are able to get the answer, asking the audience to reveal all.

The famous faces are left kicking themselves when they are told the answer is “potty training,” with Charlotte seen covering her hands over her face.

She says to Stephen: “Can we cut that bit out? Can we edit that bit?” With Stephen sarcastically promising to do so.

Back in the studio, Charlotte remarked: “If only we could edit that bit out, they’re saying, ‘Say what you see,’ and sometimes the catchphrases are not…

“It’s like a running potty, a potty running… I mean that’s not actually a Catchphrase.”

She continued: “Unfortunately, there’s nothing worse than when you can’t get the answer, you know it’s in there somewhere but you can’t get it out!”