There is a rotation of presenters on BBC Breakfast throughout the week with Dan Walker and Louise Minchin usually on hand to host Monday to Wednesday while Naga Munchetty and Charlie Stayt present from Thursday to Saturday. However, today, Naga was joined by Jon Kay instead of her usual co-host Charlie.

Naga and Jon didn’t acknowledge Charlie’s absence from the show today as they had a packed morning.

However, after presenting for much of the summer, it may be that Charlie has simply taken a well-deserved day off.

It was confirmed on the official BBC Breakfast Twitter account that Jon would be hosting in his place.

The tweet read: “Coming up on #BBCBreakfast with @TVNaga01 and @jonkay01… 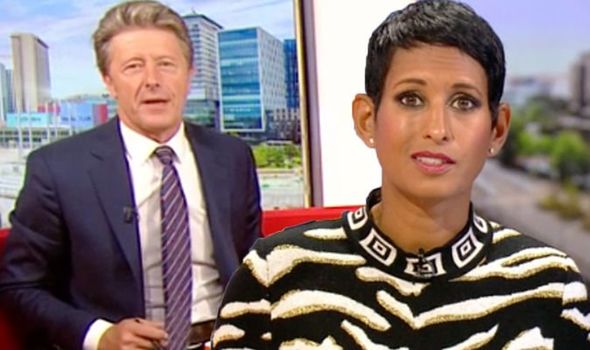 “Covid-19 testing is rationed in some areas. We will speak to Health Secretary @MattHancock and Labour’s @RachelReevesMP.

“The parents of Charlie Gard share their joy of welcoming his baby brother to the world.”

With Charlie being missing from the iconic red sofa, Jon was on hand to grill Health Secretary Matt Hancock about the latest precautions to stop the spread of coronavirus.

Jon specifically wanted to know what he had to say to BBC Breakfast viewers who claimed the have had to travel further than expected to access a test. 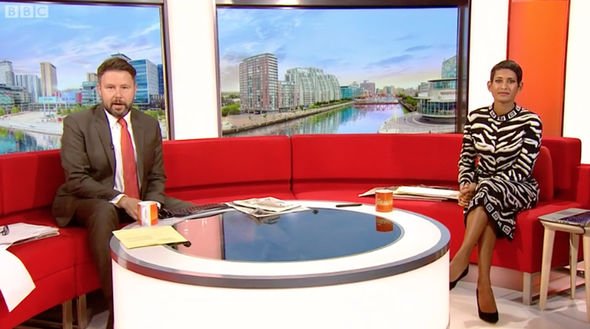 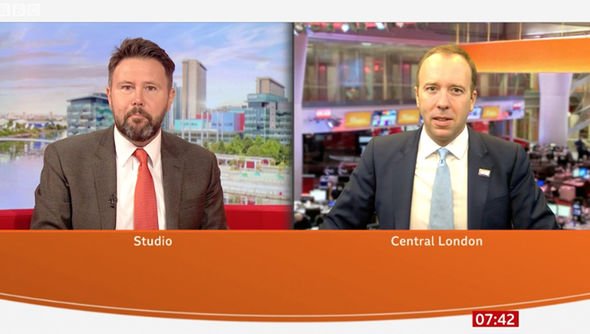 “Somebody in London, who has been told to get a test today, they’ve got to go to South wales,” Jon explained.

“Somebody in Cumbria said they’ve got to go to Dumfries. Somebody else in London who has been told to go to Leicester or Birmingham Airport.

“She describes this as shameful and just doesn’t understand why it can’t be done closer to home.

“It’s true that we’ve put a huge amount of testing into areas of outbreak where the number of cases are much higher.

“I’d say that if people need a test, the vast majority get it quickly and close to home.

“But when those testing centres are full then obviously people are offered a test at the nearest place where one is available.

“We have got significant demand for testing but we’ve also got a very high capacity.

“In any huge system like this, of course there is operational challenges as I mentioned.

“But I want to solve the problem by having the next generation of test at a radically bigger scale and you can’t do that on the current technology very easily.

“We can keep expanding it and we are but I want to get to the point where we have this new generation where you don’t have to send it off to a lab.”

BBC Breakfast airs daily on BBC One at 6am.