Kelly Dodd is at it again with her impulsive social media posts and Braunwyn Windham-Burke is her latest target.

In videos that have since been deleted, Braunwyn went on Instagram live and claimed that Kelly posted a photo of her house which also showed her license plate number and put her and her children in danger.

She said that she and husband Sean Burke would be spending all night trying to make sure the posts were removed from both Twitter and Instagram.

Braunwyn thanked fans for bringing it to her attention but asked them to report the posts if they wanted to help.

In addition to the photo, Kelly also posted a video getting a facial procedure done on her Instagram live. Braunwyn apparently had a similar procedure done previously and Kelly said, “Braunwyn copied me because she’s such a poser and a loser who’s never done anything with her life.”

Kelly’s controversial photo was quickly deleted but she replaced it with another picture on her Instagram that said, “What’s more dangerous, me showing a dark house and a license plate linked to a Florida address where she doesn’t live…or her calling me a racist and homophobic in a nationally televised interview?  She’s already shown her home on TV and advertised the neighborhood where she lives.  I revealed nothing except her out of state plates…”

Kelly went on another Instagram live to address the situation and said, “When you have a Florida plate, it’s linked to that address…I didn’t show her address I showed her fake plates and that she’s lived here for two years.  It’s not linked to her California address.  Plus her house is so distinctive they would know where she lives anyways…But go ahead and continue to play a victim.”

Several fans commented on Kelly’s post and showed their support.  One wrote, “[Braunwyn]: when you don’t get along with anyone on the cast – maybe it’s not them, but you”

Another added, “Good on you for sticking up for yourself.  She has a holier than thou attitude.” 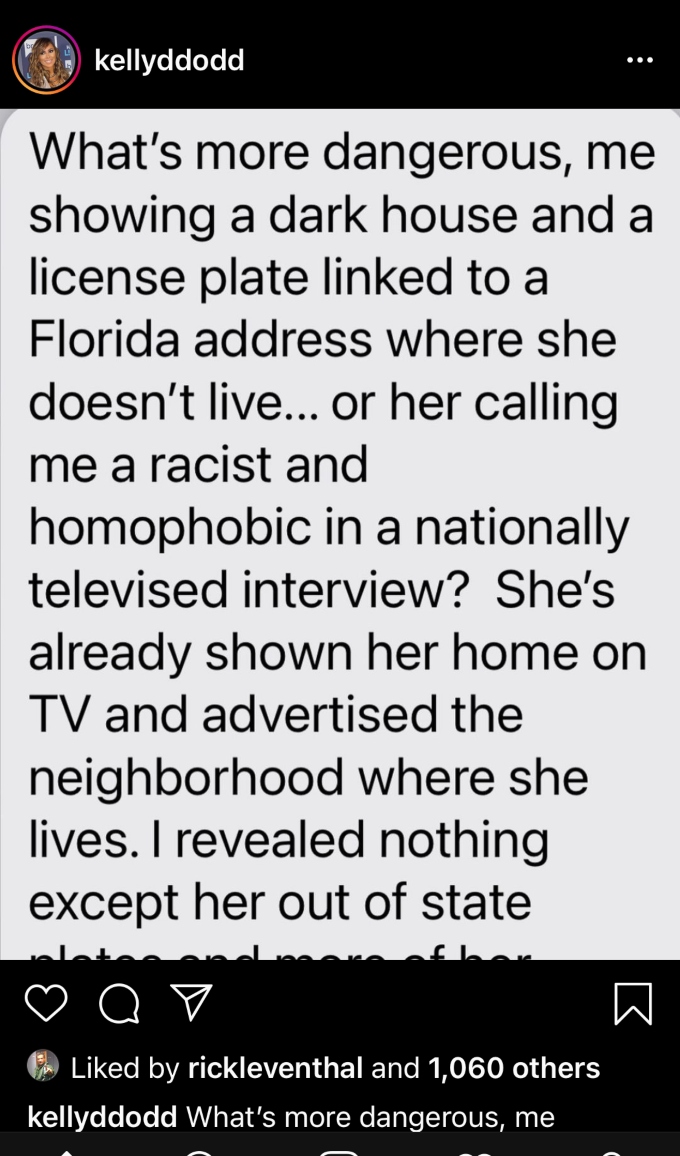 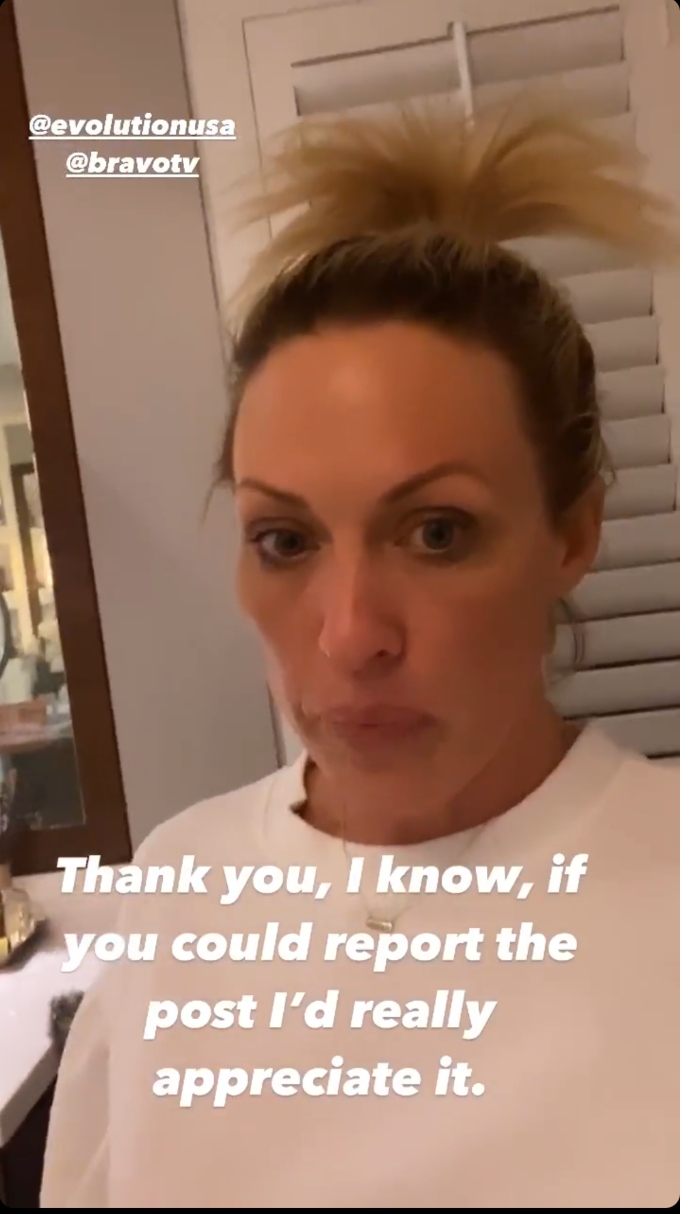 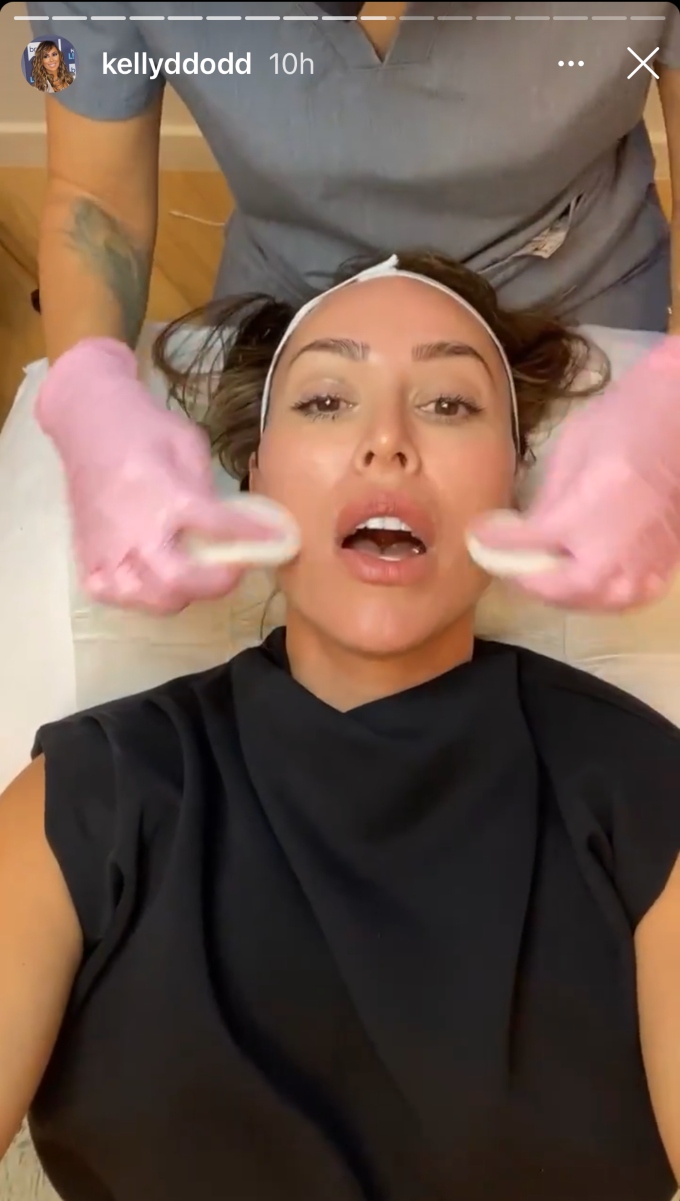 Braunwyn recently did an interview with Entertainment Tonight and blasted Kelly for her treatment of the pandemic and for what she described as an insensitive post regarding the Black Lives Matter movement.

Kelly posted a photo on social media while wearing a Drunk Wives Matter hat in addition and made a comment that COVID-19 was God’s way of “thinning the herd.”

Braunwyn said, “The fact that she didn’t take COVID seriously, I didn’t understand that.  Leaving your daughter during a global pandemic was weird to me, I can’t imagine that. But the main thing for me was when we really  got into it over Black Lives Matter.”

Kelly quickly reacted and posted to social media calling Braunwyn a hypocrite and hinting that she won’t stand a chance against her at the RHOC reunion. 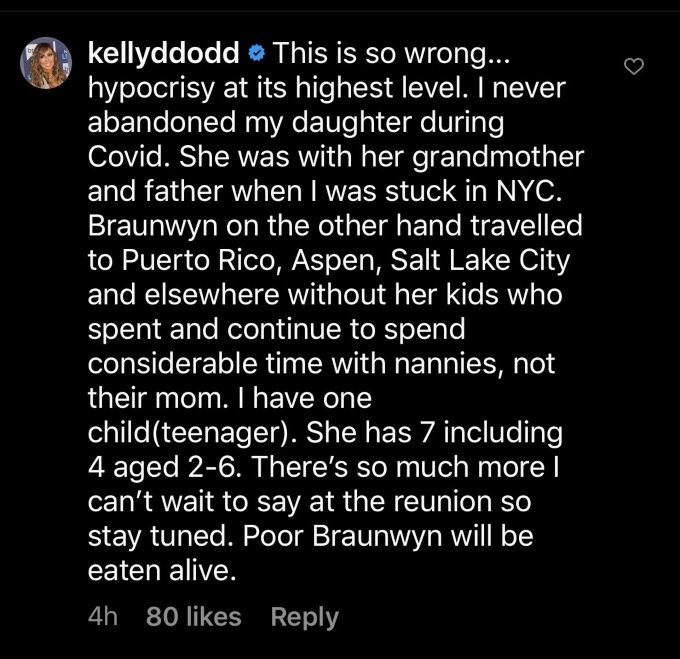 Braunwyn clashes with the rest of the cast

Kelly isn’t the only housewife at odds with Braunwyn.  Braunwyn somehow managed to upset the majority of her castmates during the most recent episode of RHOC.

During Shannon Beador’s housewarming party, Braunwyn went after Gina and told her she’d been talking a lot of crap about her behind her back.  Braunwyn had been upset with Gina after she accused her husband Sean of being creepy when he sent her a text message to make sure she got home from a party okay.

During the same episode, Braunwyn upset costar Shannon Beador when she told the other women that Shannon called Gina’s new condo “sad”.  Shannon denied the claim and was furious that Braunwyn would make the accusation.

At the same time, Braunwyn upset Emily Simpson when she told Gina she didn’t have time to call her and talk out their issues because she was too busy and couldn’t find the time.  Emily thought the excuse was ridiculous and told Braunwyn that with two nannies and no job, she could make time.

The RHOC reunion is a long way away as the show only aired three episodes so far.  If the remainder of the season is anything like the first few episodes, the reunion is sure to get spicy for Braunwyn.

The Real Housewives of Orange County airs Wednesdays at 9/8c on Bravo.