Brandi Glanville was the name on everyone’s tongue during Season 10 of Real Housewives of Beverly Hills, but that doesn’t mean she’s coming back for Season 11.

The controversial housewife stepped in mid-season and dropped a bomb that would lead to severed friendships within the cast. It also caused newcomer Denise Richards to quit the show after only two years since she found herself at the center of the scandal.

So what did Brandi do exactly?

Well, she told the cast that she had an affair with a “very married” Denise right before the women jetted off to Rome on their cast trip.

Denise denied Brandi’s accusations, but the women felt that she was being dishonest and spent the entire season in complete frustration trying to get the blonde beauty to fess up.

By the time the reunion rolled around, Denise had had enough, and her rep soon revealed that she had quit the show.

Many fans were angry at the news and blamed the cast for Denise’s exit, but their number one target was Brandi.

The RHOBH alum got tons of backlash on social media for her part in the scandal, and many felt it was an attempt to get back on the show.

But, did it work?

Will Brandi return to RHOBH?

Brandi is known for stirring the pot, which always makes for good reality TV. However, if Brandi’s plan was to snag a diamond for the upcoming season, it may have backfired.

Viewers certainly don’t want her back on the show, and it seems the network isn’t too keen on her return either.

Even the controversial star herself doesn’t seem to know what’s going on with her status on RHOBH, as evidenced by her response to a recent fan question.

“Is your new job Blonde and Blonder or RHOBH for next season?” the fan asked on Instagram. “You better have negotiated a comeback after all you gave them for S10!!”

“Haven’t heard from them also don’t have a desire to reach out,” responded Brandi. “They know how to find me.” 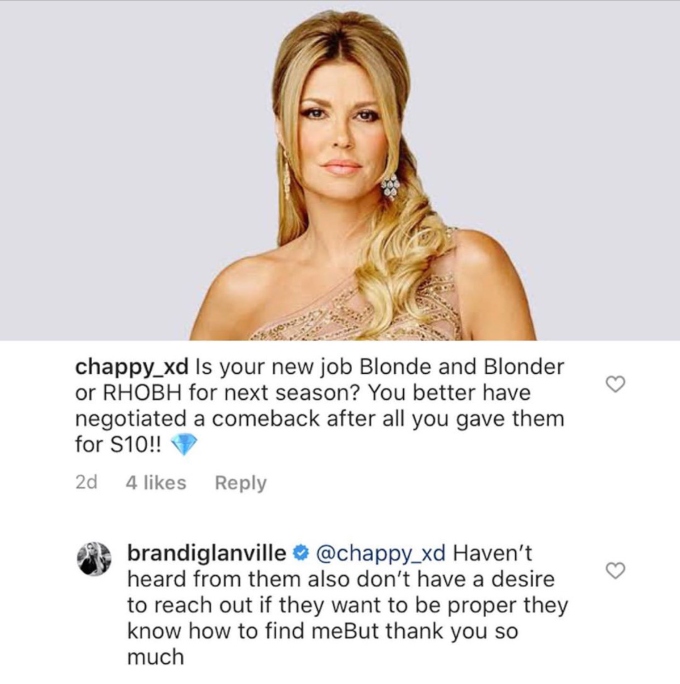 So Brandi might be out, and we already know that Denise Richards has quit the show.

Teddi Mellencamp was also given her walking papers, so she will not return as a cast member for Season 11.

However, OGs Kyle Richards, Lisa Rinna, Erika Girardi, and Dorit Kemsley are all coming back, and newbies Garcelle Beauvais and Sutton Stracke will return for their second season.

There have also been rumors that Ali Landri, Kathy Hilton, and Crystal Minkoff will round out the cast, but those are still unconfirmed.

The Real Housewives of Beverly Hills is currently on hiatus on Bravo.