Yes, we’re back at the mansion for another season of The Bachelor — and new star Zach could already use some extra lip balm, after all that kissing.

Monday’s premiere opens with a limo full of girls dubbing our new leading man “Zach the Snack,” and we get the standard biographical rundown on Zach — although they never explain what happened between him and Rachel on The Bachelorette. Maybe because his abrupt exit didn’t make any sense then, and still doesn’t make sense now? Anyway, on with the show! Zach sees Sean Lowe (the only successful Bachelor!) as his inspiration, so Sean stops by to give him some advice, which boils down to “marry your best friend”… and work hard in the gym for all those shirtless shots. We also get a montage introducing us to Zach’s women, but they all kind of blend together — and is it just us, or are they all Southern?

It’s time for Zach to meet the ladies… although he’s actually met some of them already. If you recall, when Zach was announced as the next Bachelor on “After the Final Rose,” they brought out five of the women to meet him on the spot, and viewers voted for Brianna to receive an early rose. So Zach knows a few of them, including Bailey, whose name he butchered when they first met. (What the hell is a “Bailon”?) He makes up for it, though, by kissing her right after she walks out of the limo! Is that the earliest kiss we’ve ever seen on The Bachelor? The kooky entrances are kept to a minimum this season, but Mercedes grew up on a farm in Iowa, so she brings a pig named Henry with her. Plus, Christina Mandrell — the niece of country music legend Barbara Mandrell! — rides up on a party bus, and Brianna arrives confidently holding her rose… and wearing a bright red dress made of roses, too. Well, dress for the job you want, we guess. 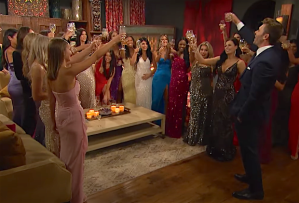 After a dizzying whirlwind of introductions, Zach enters the mansion, telling the ladies he loves “family, football and frozen pizzas.” (Classy!) His parents are still married, he adds, and he wants that for himself. Katherine pulls him for a chat first, and he’s awestruck by her beauty: “It’s getting me excited.” Alright, slow down there, buddy. He shares a kiss with Austin nurse Kaity, and even though he totally bombs a personality quiz given to him by Christina Mandrell, they kiss anyway. He plays “How many meatballs can you fit in your mouth?” with another girl — and ladies, pleas note: This is not a great game to play on a first date. He shares some intimate one-on-one time with Brianna the Rose Haver, but he seems more taken by brunette Greer, who shares his love of Texas… and shares a liplock with him, too.

The other girls are starting to feel the pressure, including North Dakota native Madison, who appears to be, as Wedding Crashers put it, “a Stage 5 clinger.” She needs a kiss from Zach, so she pulls him aside and gives him a knit cap and scarf to wear, but she only gets a hug. So she interrupts another girl’s chat and steals more time with Zach, pulling him in for an awkwardly forced kiss. Yikes. Afterwards, she’s disappointed, calling the kiss “subpar” and “a peck” before dissolving into sobs. Meanwhile, Zach calls her advances “overwhelming.” Luckily, he bounces back quickly, sharing (consensual!) smooches with family therapist Charity and first-out-of-the-limo Jess. When it’s time to hand out the first impression rose, he gives it to Greer — and Madison is surprised she didn’t get it?! We’ll write here what we said aloud while watching this: Are you deluded? 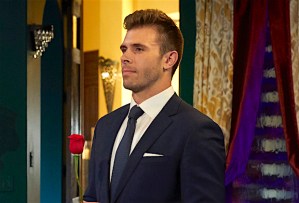 Before the rose ceremony, Madison “disrupts” Zach’s chat with Jesse and forces Zach to dump her one-on-one to her face. “I really do thank you for being here,” he eventually says, but “my heart wasn’t feeling it.” She leaves the house in tears, muttering to herself, “I can’t believe that I gave up my life for him.” We’ve said it already, but just for emphasis: Yikes. Zach then hands out a flurry of roses, sending home Lekha, who licked him when she came out of the limo, and Holland, who goes off on a drunken rant about how she deserves so much better than this. The trailer for the rest of the season indicates that Zach continues to have trouble making up his mind, kissing a wide array of women as they trot the globe together. But as one girl cries in a heap on the stairs, Zach admits, “I have caused pain,” and he sheds tears of his own as another girl walks out, with him admitting, “I still love her.” Buckle up, Bachelor Nation: This looks like a bumpy one.

Alright, now it’s your turn. Give the season premiere a grade in our poll, and then tell us in the comments: Who do you think will end up holding Zach’s final rose?