Penn Badgley is back as Joe Goldberg for Season 4 of “You” on Netflix, and this time, the serial killer will be stalking on an international scale.

As a reminder for the murderer-with-a-heart-of-gold (kind of?) series, Season 3 of “You” centered on newly married father Joe (Badgley) falling for single-mother librarian Marienne (Tati Gabrielle) while struggling to find himself amid the horrors of suburban domesticity.

Spoilers: Season 3 concluded with Joe murdering his wife Love (Victoria Pedretti), giving away his infant son Henry, and setting out to stalk the “true” love of his life, Marienne, in Paris — after realizing he just can’t live without their steamy chemistry and soulful literary connection.

Based on Caroline Kepnes’ best-selling novels, “You” asks the sometimes sinister question: “What would you do for love?”

Per an official press statement, Season 4 will pick up after fans last saw Joe pursuing Marienne to Europe. “You” Season 4 premieres February 10. See all the details we know so far about “You” Season 4 below.

Lead star Penn Badgley made his TikTok debut with a hilarious lip sync rendition of Taylor Swift’s “Anti-Hero,” showing the duality of his “You” character Joe Goldberg by highlighting the lyrics “Hi, I’m the problem, it’s me.”

“You” showrunner Sera Gamble gave an update on the post-production process for Season 4, starting off the caption with another “Hi” to “You” fans. “Hi from #younetflix postproduction,” Gamble wrote with a still from the monitor. “Safe to say we’re all having a better day than Joe is.”

Season 4 Will Be Split Into Two Parts

The official teaser for “You” Season 4 shows Joe Goldberg (Penn Badgley) reintroducing himself under a new identity, with him now acting as a teacher named Professor Jonathan Moore in the U.K.

“Gone are the days of unrequited love and longing,” Joe says. “This time around, I’m focusing on academia and instruction while keeping my typical extracurricular activities strictly professional. I made time to exchange ideas with like-minded colleagues. Unfortunately, with friends in high places, then usually come others attempting to climb that social ladder. So, they end up falling or shall I say, pushed, to their social death. The question, by who?”

“You” Season 4 will premiere February 10, followed by Part Two out March 10. Showrunner Sera Gamble teased on Instagram, “Trust me, you’ll need the time to process… and maybe place a few friendly bets about where it’s all going.”

Joe Goldberg (Penn Badgley) has answered London’s call! Netflix shared a sneak peek at Season 4 of “You,” set in the U.K. literary scene.

Production Is Underway…in an Unexpected Location 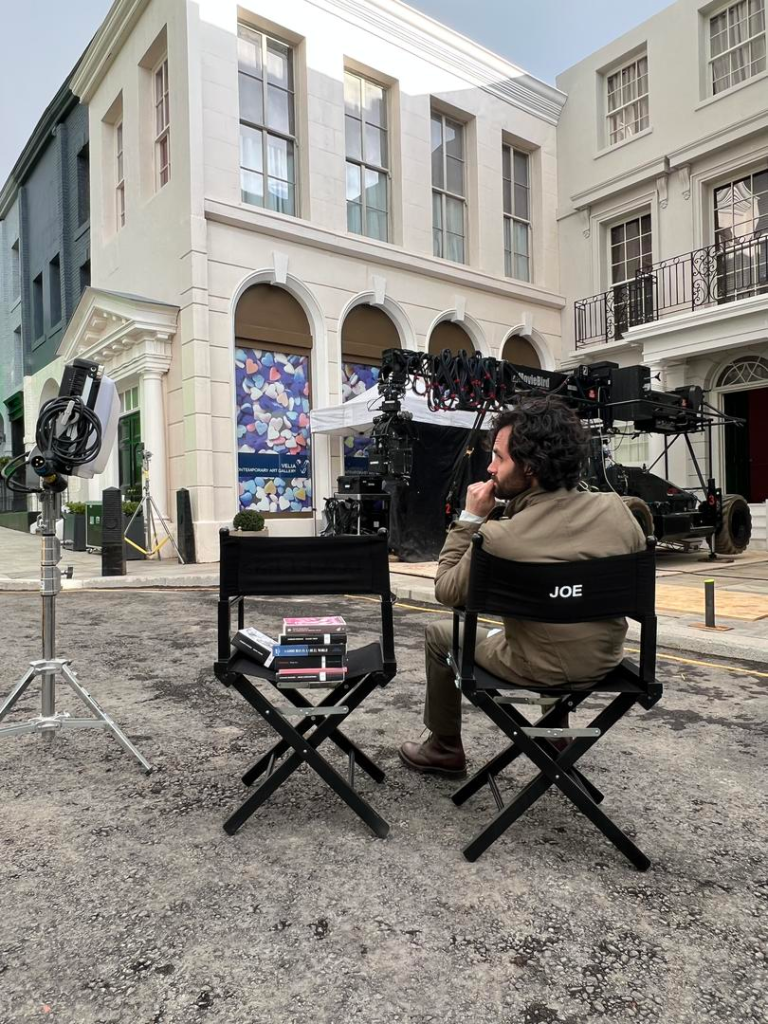 Penn Badgley on “You” set

Despite the Season 3 finale finding Joe lurking in Parisian cafés looking for Marienne, Netflix announced that Season 4 will take place in London. As of April 1, production is officially underway. 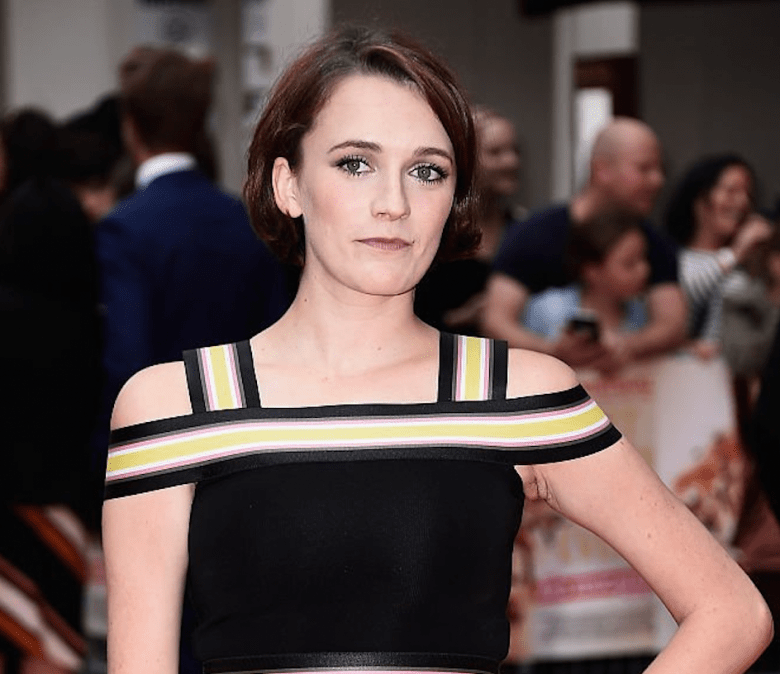 Fans are quick to glean that new series regular Kate, played by Charlotte Ritchie, will most likely be Joe’s newest obsession. The daughter of a chaotic, bohemian single mother, Kate worked hard to create the life she now leads. She’s an art gallery director whose job means managing tempestuous artists. Kate tends to be “the adult in the room,” and has embraced the moniker of “icy bitch.”

A friend ’til the end, Kate is especially protective of best friend Lady Phoebe (Tilly Keeper), a sweet and trusting person whose extreme wealth and fame tend to attract opportunists. Kate prefers “arrangements” to love, which is why she dates fun but self-centered partier and literature professor Malcolm (Stephen Hagan). Described as a a “drug-loving bon vivant,” Malcolm’s outgoing attitude ventures on bullying.

When Malcolm invites Joe, an American outsider of no apparent means, into their privileged world, Kate not only immediately dislikes him, she strongly suspects something about the man is not what he seems.

More Instagram Influencers Will Perish at the Hands of Joe

After Joe uncharacteristically let his former Madre Linda neighbors-slash-parenting bloggers free in Season 3, it seems that he will have to face another round of influencers abroad, including Lady Phoebe, whose “every bikini wax has been documented by the tabloids since she was 15 years old.”

The aristocratic socialite has an avid fan base, and Phoebe’s true colors show when she’s alone with her friends. She’s a steadfast cheerleader, especially for her American entrepreneur boyfriend Adam (Lukas Gage). She’s also a wild card: When misfortune strikes, will she rise to the occasion, or shatter? 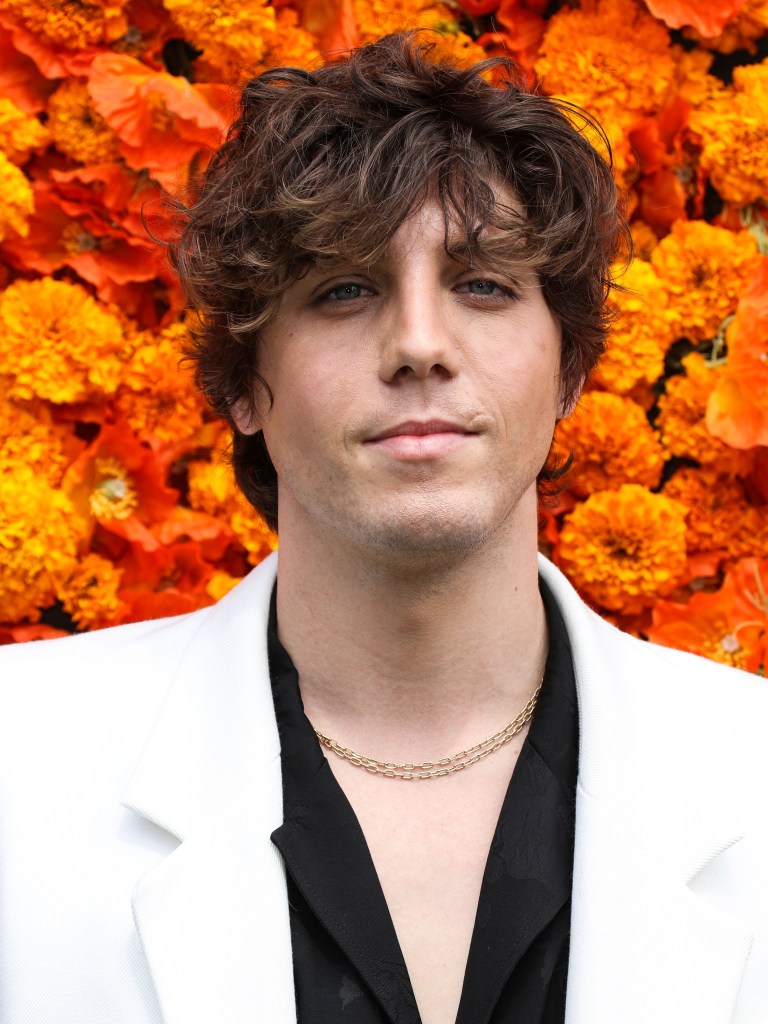 Like Love (Pedretti) and her late brother Forty (James Scully), Adam also comes from an elite background. The youngest son of a wealthy East Coast magnate, Adam is famous for spectacularly failing to meet the standards of his successful, venerable family. An entrepreneur and a gambler, Adam is a warm and funny party host and fast friend. But underneath, Adam is hiding a trove of secrets and papering over problems with heavy self-medication.

Adam is also protected by his personal security guard-slash-driver-slash-drug dealer Vic (Sean Pertwee), who is not afraid to get his hands dirty to help cover up Adam’s indiscretions.

Per an official character description, Adam is determined to prove himself with big, risky swings, living by the truism that a good businessman does absolutely anything he can get away with. Does he love his wealthy, titled girlfriend Lady Phoebe, or is he using her?

The Academic Literary World Will Finally Be Represented

What, we’d just keep watching Joe work at bookstores and libraries? Thankfully, the academy literary community will be onscreen in Season 4, led by literature professor Malcolm (Hagan). Will this mean that Joe will get his MFA? We’re not counting it out!

Amy Leigh Hickman also stars as student Nadia, a literature major with a love of genre storytelling and the aspiration to be a serious author but with a serious secret. Nadia’s outspokenness and intensity are a perfect cover for the insecurities carried by a young woman who’s never been accepted by her peer group. She’s made some big mistakes; now, they threaten to destroy her life. She’ll need help, even if it’s from the wrong people. Nadia’s rival is Edward (Brad Alexander), whose dad owns a powerful news outlet. 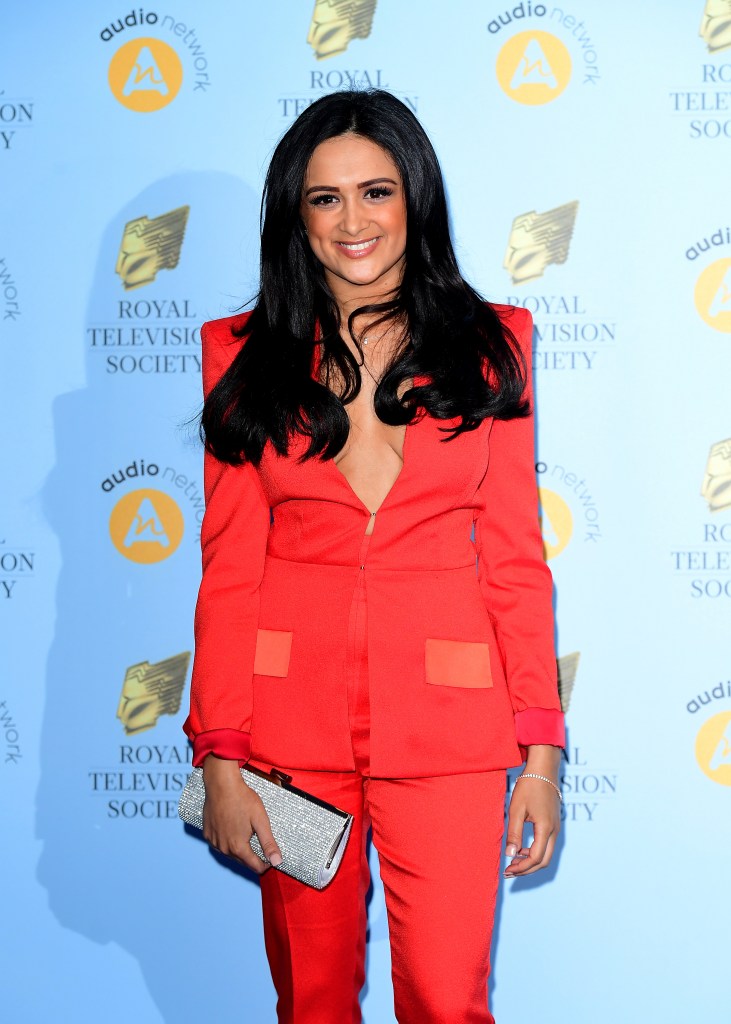 Meanwhile, “Outlander” alum Ed Speleers plays Rhys, a dry, irreverent author whose memoir garnered him acclaim and pressure to launch a political career. Born into poverty, Rhys lived a traumatic early life before he came into money, going to Oxford and making all the right friends. Now, he moves easily in any social circle, while also seeing through those around him. He doesn’t have much time for partying, though he enjoys staying in touch with his eccentric circle of friends. After all, they were there for him in his troubled youth. Sounds like he could bond with Joe!

Niccy Lin plays Sophie, an entrepreneur in the body of a pampered jetsetter. Sure, it looks like she’s lying around in a bikini on social media, but every aspect of her feed represents cannily-negotiated high-end sponsorship deals. Underneath her whimsical exterior, Sophie is a watchful protector of her introverted artist brother, Simon (Aidan Cheng). Simon is impossible to impress and abhors small talk and strangers. The Oxford-educated son of a Chinese technology magnate, Simon proved the world wrong when, despite his wealth and sheltered life, he proved himself an artist worthy of acclaim.

Ben Wiggins plays Roald, who hails from an old aristocratic family . He is attractive, stylish and possessed of perfect manners, but there’s a certain cold calculation to Roald, not to mention rumors of a hidden dark side.

Eve Austin plays Gemma. A member of a privileged circle of friends who met at Oxford, Gemma has never given a day’s thought to life beyond the next VIP event, fashion show, or date. She’s a fun friend to party with, but her insular and privileged life has rendered her shockingly tone-deaf and startlingly lacking in empathy towards those with less.

Ozioma Whenu is Blessing, a Nigerian princess with several post-graduate degrees, Blessing is an investor with a passion for cryptocurrency. Wry, fun-loving, unapologetically cliquish with her university friends, her carefree risk-taking in life and business has paid off time and again. What’s her secret? She believes we’re all living in a simulation, so only fools would stop themselves from doing whatever they want.

Dario Coates plays Connie, who attended Oxford with Kate and Phoebe’s friend group. He is upper-crust, posh, a sportsman gone soft. Loud, potty-mouthed, loves betting, horses, drinking and cocaine, it’s safe to assume that Connie’s never had to face a negative consequence in his life.

Alison Pargeter plays Dawn, not someone you’d notice in a crowd but that helps with her work as a paparazzo. But if you’re someone determined to avoid being captured on camera, well, Dawn could pose a problem.

Adam James plays Elliot, world-weary, calm, grounded, allergic to drama, traveling through Europe for his job. Elliot’s employer is powerful, and Elliot always delivers, no matter how challenging the task.

But Marienne May Foil Joe’s Plans 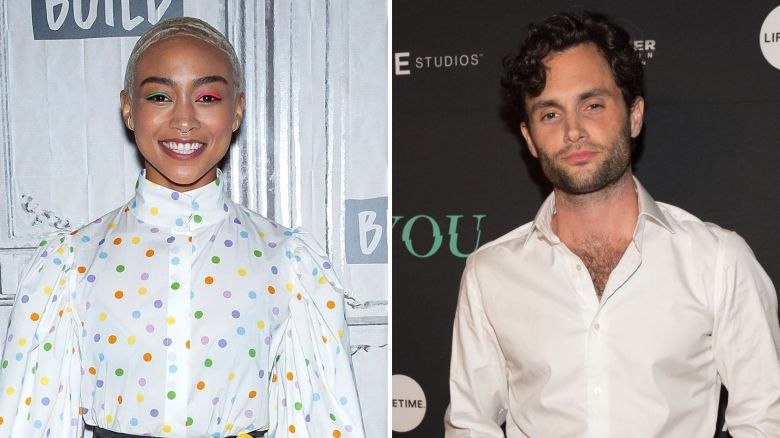 Oh Marienne, can you ever escape Joe’s clutches? Marienne learned of Joe’s deadly, obsessive love in the Season 3 finale, and Netflix confirmed that Tati Gabrielle will return for Season 4.

Gabrielle previously told ScreenRant that she hopes Marienne is an adversary to Joe after realizing his true intentions. 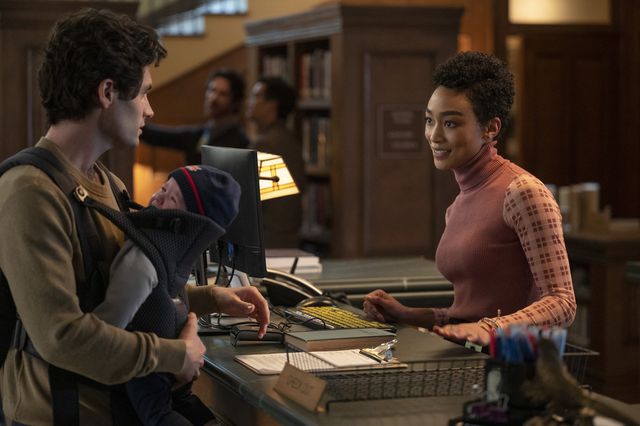 Gabrielle revealed to Glamour UK that “You” employs an intimacy coordinator on set.

“It was such an interesting, strange conversation that I’d never engaged in [before],” Gabrielle recalled of choreographing love scenes between Marienne and Joe (Badgley). “Like: ‘Is it OK if he touches here? The butt? Can he touch the side of your butt? How about the butt cheek? Are you OK with the side of the boob? Are you OK with one nipple or two nipples?’ Things that I wouldn’t have even thought about if I was in the moment!”

Yet by the second sex scene in Season 3, Gabrielle had “developed a rhythm” with co-star Badgley.

“Because I told him the first day that I came on set for our first scene, I was like, ‘Dude, I got to tell you, I’m so nervous. Never done this before,’” Gabrielle recalled. “He’s like, ‘Oh my God, no, it’s going to be fine. We’ll go through it.’ It ends up being like a dance. You choreograph it all.”

Gabrielle added, “He said, ‘Just talk to me. Let me know if you feel weird about something, if you’re uncomfortable.’ He was just so helpful and a really, I think, great person to have as an introduction to that, because I felt very safe with him.”

“You” Will Have an Entirely Different “Shift” in Format, But Even More Surprise Familiar Faces 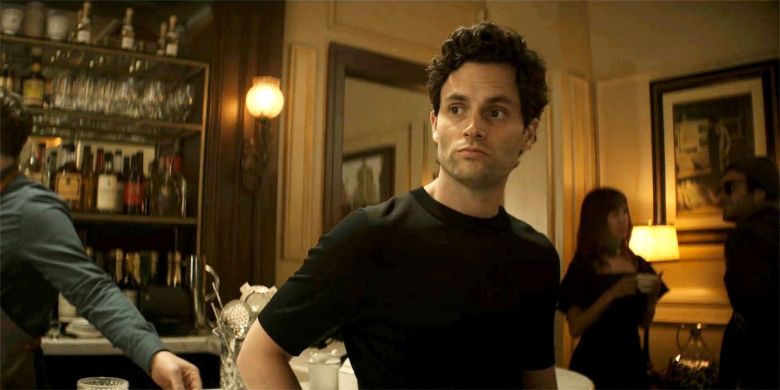 After three seasons of guy meets girl, guy stalks girl, guy falls for girl, and then guy kills (or tries to kill) girl…”You” won’t see what’s coming next. Penn Badgley confirmed to Entertainment Tonight on June 7 that the series will evolve as Joe (Badgley) learns more about his own trauma.

After signing on as a producer for Season 3 last year, Penn Badgley steps behind the camera to make his directorial debut for “You” Season 4. Showrunner Sera Gamble announced Badgley was taking over the director’s chair in an Instagram post with the caption, “We hired a new director this season but he seems to know the show really, really well.”

Former “You” star Jenna Ortega commented, “You’re kidding!! So, so cool,” while “You” newcomer Lukas Gage wrote, “A natural!”

Writer Gamble also previously teased that the Season 4 finale, co-written by Michael Foley, will jokingly have “all the characters spend the whole episode cozied up safely around the fire with dogs in their laps, discussing the new Beyoncé album over tea.”