What could pass for another intensely-themed inner-city small bar is actually an illegal casino for Les Norton, the upcoming ABC series based on the local crime classics of butcher-turned-hardboiled bestseller Robert G. Barrett, Glebe's one-time children's court filling in for the seedier side of Kings Cross circa 1985. 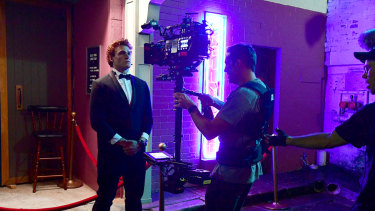 "It's sort of fabulous that a building with such a dark history can be transformed into something creative and overall positive," says series creator and director Morgan O'Neill. "It's a nice irony that people are working here."

The series stars Alexander Bertrand as Barrett's laconic, flame-haired hard man, alongside David Wenham, Rebel Wilson and Hunter Page-Lochard as his various underground cronies. While the casting's proven pitch-perfect, replicating the more bohemian aspects of '80s Sydney has been its own challenge, says O'Neill. 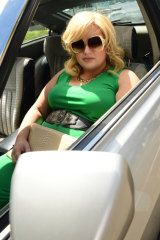 "The Cross has always been morphing, but the face it presents to people nowadays – quiet and sedate – is unlike it's ever been. It's unrecognisable," he says. "That rich tapestry of clubs, strip joints, mayhem, that rich swirl of humanity… That's how a lot of people remember the Cross, and part of our job is to try to recreate that."

"The beach is the beach, sand is timeless, and those beautiful rocky headlands of Ben Buckler Point and South Bondi are indomitable. Despite our best efforts, we haven't messed it up," O'Neill laughs. "The show itself is in many ways a love letter, to both the '80s and also Sydney."

The locales are one thing; the text's another. Having taken artistic liberty to update Barrett's rabble-rousing larrikins for a new era's sensibilities, O'Neill admits concern at how the books' hardcore fans might react to a couple of "big calls", including gender-flipping Norton's debauched, hard-living flatmate Woz.

"Look, Bob Barrett himself was an equal opportunity shitstirrer; he'd have a crack at everyone… [But] you’d have to be awfully blind and tone-deaf not to know that the world has changed significantly, and significantly for the better, since 1985 in terms of gender balance and diversity," says O'Neill.

"The character of Les, I describe him as a 'modernist brute'. He's utterly non-judgmental in the way that so many great Australian characters are, like Crocodile Dundee, for example. He has no problem with anyone doing their own thing, and that's what people warm to."

Les Norton will premiere on the ABC later in the year.