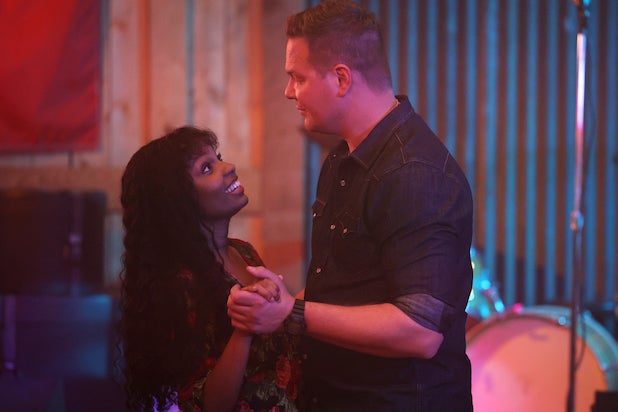 (Warning: This post contains spoilers for Monday’s midseason premiere of the second season of “9-1-1: Lone Star.)

“9-1-1” spinoff “Lone Star” has yet to break into the “Begins” franchise of episodes that its parent series has been churning out for four seasons, but the Austin-set Fox drama came close with Monday’s midseason premiere, “Saving Grace.” The hour served as what we’ll call a “Grace and Judd Begin,” as it flashed back to the first time Grace (Sierra McClain) and Judd (Jim Parrack) met, while in the present day dealing with the aftermath of their horrific car accident.

While fans were waiting to see if Grace — who sustained more injuries in the crash and was out cold in the hospital for the better part of the episode — would pull through as Judd prayed for her survival, we were treated to their adorable backstory. That first meeting between the firefighter and the one-day 911 operator began over the phone, when he called a prayer hotline looking for a little guidance.

“Them meeting, first of all, in the way that they did — and Jim speaks about this a lot more eloquently than I do, so I’m going to pass it over to him rather quickly — but watching them, the way that they met really set the tone for the rest of their relationship,” McClain told TheWrap when discussing Grace and Judd’s meet-cute in an interview with co-star Parrack. “It set a certain precedent in the way that they spoke about some of the things that Judd was going through, and the way that Grace advised him. I think that she was very straightforward and that he was very honest. And I think that even almost 10 years later in the relationship, that’s what you see in their communication.”

Parrack jumped in to say McClain’s take is “spot-on,” adding that when “9-1-1: Lone Star” showrunner Tim Minear first told him Judd and Grace’s origin story — which included the fact that Judd had accidentally killed his best friend in a car accident as a young boy — the “Lone Star” actor was shocked to find it matched the backstory he had written in his mind.

“Not a lot of the finer details, but, you know, Judd’s reason for being a fireman and maybe having kind of a troubled youth and coming through some stuff. And Grace maybe was the guiding light for all that… I think it’s a sign that, as a team, our instincts are sort of organically aimed in the right direction,” Parrack explained.

The one part of the story Parrack never could have foreseen was the pivotal way in which Minear worked the actor’s Psalm 31 tattoo, which he had before coming on the show, into Grace and Judd’s romance. As we learn, this was the Bible passage that entered into the couple’s first conversation, and Judd got it tattooed on his hand after the pair’s whirlwind romance (initially) came to a premature end because he was worried about holding Grace back.

“So I got this tattoo in 2017. I believe in an all-powerful, loving God, and I’ve encountered this God numerous times, but I was in a place in my life where I just felt so stuck and I couldn’t live the way that I hoped to,” Parrack said. “I felt like I didn’t have a right to even go to God and seek help. And the Psalm, as I read it during that time, there was a piece of it that said, ‘Praise be to the Lord, for he showed me the wonders of his love when I was in a city under siege. In my alarm, I cried out, I’m cut off from your sight. But you heard my cry for mercy when I called you for help,’ which was exactly the situation I was feeling. I was feeling like I’ve got myself in a bad spot here, I don’t know how to get out. Maybe if I just said, ‘Hey, it’s me, help me out.’ And the response of love that came my way was something I never, ever wanted to forget.”

Parrack said that when he was cast on “9-1-1: Lone Star,” he was confident his “silly” tattoo would be covered with makeup.

“But instead, Tim said, what does that mean? I told them the story I told you, and he goes, ‘That’s the character.’ I always thought it was sort of just a subtle detail. Maybe some people noticed and maybe they didn’t. But the way [Minear] worked it in and the way he worked in our hands and holding hands and coming together and trying to rescue her and committing murder and all these things. They really, really utilize this thing, which, like I said, had had an inborn, personal resonance with long before we ever shot this thing. It just made a lot of what we are doing feel very autobiographical.”

At the end of the episode, Grace not only survives and comes back to Judd in the present day, while the two are making up in their past, but we find out she is pregnant. The news has the couple on cloud nine, but McClain said she is a little concerned for what that means moving forward.

“Even when we found out and we were playing it and I was laying there, I felt this sense of being afraid for Grace, having gone through such physical and emotional and mental trauma and then the thought of having to bring another human life into this world and what that transition is going to be like,” the “9-1-1: Lone Star” actress said. “I’m sure there’s going to be a sense of, ‘I feel like I can barely take care of myself. How will I be able to responsibly take care of this child?’ But of course, I think the overall joy of the thought of being a parent kind of supersedes all of it. That’s the part that I hope that you’ll see more than anything.”