While this kind of catastrophe in ultraracing is unusual, deaths during races are not. Fifty-one runners died running and racing mountains in Western Europe alone between 2008 and 2019, according to a recent study in the journal Wilderness and Environmental Medicine. The most common causes of death were cardiac issues, injury from falls and hypothermia.

Ultrarunning is similar to where obstacle racing was in the mid 2010s, when deaths and injuries — and lawsuits — piled up, forcing some of those races to close.

“Ultrarunners want to be badasses,” said Trishul Cherns, 64, of Middle Village, N.Y., who began running ultramarathons in 1978 and holds multiple Canadian ultramarathon records. “I want to be a badass, but we all are guilty of wanting to take things too far,” he said.

The sport is growing at a fast clip. There are newer races like the single stage 106-mile Ultra Trail du Mont Blanc in the Alps between Italy and France and the six day 156-mile Marathon des Sables across the Sahara in Morocco, and landmark races like the Comrades Marathon (around 56 miles) in South Africa and the Western States 100-mile run in Squaw Valley, Calif.

More than 600,000 people ran an ultramarathon in 2018, a jump of nearly 350 percent in the last decade and nearly 1,700 percent from the 1990s, according to a recent study from the International Association of Ultrarunners, the global governing body for the sport.

I’m one of those newer participants, and began this year with a 24-hour race. I run them because I like to challenge myself both mentally and physically, and I revel in doing athletic feats I never thought possible, especially at 40 years old. Ultras are all about pushing yourself to the edge: how long you can go, how far you can go, what extremes can you endure. And I run these races, especially trail races, knowing the risks at hand. No matter how many precautions I take, I could still hurt myself — or worse.

As the sport grows, so do the concerns around safety. Organizers are eager to appease those hungry for a new challenge by making their events longer, harder and harsher, with added danger from either terrain or weather. And more races from less experienced race directors can lead to events without appropriate measures in place.

Races may demand medical personnel, equipment requirements to ensure runners have emergency gear, multiple aid stations and checkpoints on the course, and qualification requirements. (One example: Some 100-mile races will ask runners to prove they have at least done a 50-kilometer race before signing up.)

In some cases, race directors also need to be ready and willing to pull struggling runners off the course, as Cherns has done in his role as race director of the Great New York 100 race when runners want to press on despite showing obvious signs of heat exhaustion.

I’ve dropped out of two trail races in my time in the sport, and both times, race directors tried to get me to keep going. I knew my body well enough to know it would be dangerous for me to continue because of dehydration and severe stomach pain.

This is a moment of reckoning for the sport, and a time to look at what we want races to be in the future. But it’s easier said than done when entrants are looking to push past pain for athletic glory or Strava bragging rights. 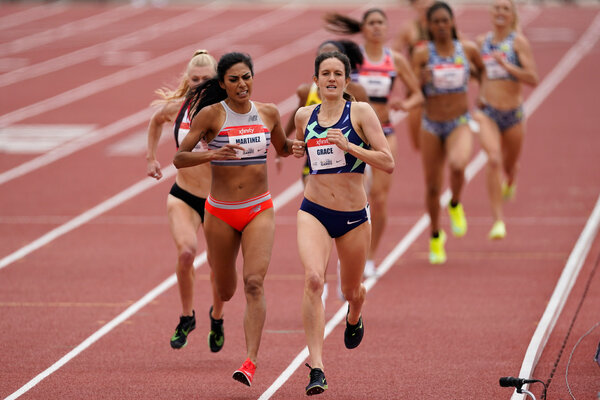 The countdown to the U.S. Olympic Track Trials continues, and this weekend’s Portland Track Festival is stacked with some of the top contenders for this year’s Games.

Have you ever finished a run and circled the block a few times to hit a certain number on your GPS watch? Yeah, you’re in good company. Brendan Leonard illustrates the “parking lot lap” ritual in this fun read. “I’m fully aware that it’s ridiculous, but so is running when no one’s chasing you, when you think about it,” he writes.

Mmm … summer. Food reporters and editors shared all of the cold-creamy-crunchy-salty-delicious things they can’t wait to eat and drink.

Are you a morning runner, afternoon runner, or evening runner?

According to new study of exercise timing, evening exercise has benefits for improving metabolic health.

“The study, which looked at high-fat diets and overweight men, found that late-day workouts moderated the undesirable health effects of a greasy diet, while morning exercise did not,” Gretchen Reynolds writes.