Elite Australian athletes are giving up on their dreams as their finances collapse in a COVID-hit economy – and that could leave the country red-faced if Brisbane succeeds in winning the right to host the 2032 Olympic Games, athlete advocates have warned.

A new survey of 521 athletes conducted by the Australian Sports Foundation – a non-profit sports fundraising charity – found that about half of those who competed at national or international level, outside the big professional codes, were earning less than $23,000 a year from their sport and other work combined.

About 75 per cent of respondents were competing at representative level. According to the survey, most earned less than the national minimum wage, which is $19.84 per hour or about 39,000 a year before tax. 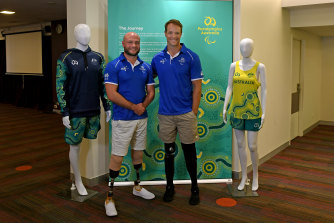 Wheelchair rugby player Chris Bond and paracanoeist Curtis McGrath with some of the new team outfits for the Tokyo 2020 Paralympics. Credit:Paralympics Australia/Jeff Crow

As a result of their financial situation, according to Paralympian Chris Bond, many have concluded it is impossible to carry on – especially in an uncertain economic environment, as the country tries to recover from the pandemic.

“When people hear the words ‘elite athlete’ they very often just think of the big stars from the footy codes that they see on the back pages of the papers and on television, ” said Bond, a dual gold medallist and world champion.

“They are well paid, but the reality is very different for most athletes in Olympic and Paralympic sports. They are struggling and many are on the verge of giving up because of the financial pressure. We have Olympic and Paralympic athletes earning less than the minimum wage as they try to combine work with their sporting career.

“And that could have a flow-on effect if the numbers drop and we lose a generation of elite athletes. It could harm Australia’s performance at the Olympics if Brisbane gets the Games.”

Bond, a wheelchair rugby star and sports partnership manager with the Australian Sports Foundation, was speaking after the organisation released the report on the impact of COVID-19 on Australian athletes.

“We have Olympic and Paralympic athletes earning less than the minimum wage as they try to combine work with their sporting career.”

The foundation said it has, over the past 30 years, raised close to $500 million to help fund sportsmen and women to achieve their career aims.

Around 40 per cent of the total who responded to the survey could be classified as Olympic-level competitors, illustrating the squeeze that is on even the highest level athletes.

“They are underfunded, have limited financial security and rely on their families or outside employment to survive financially, and their financial circumstances and ability to perform have been worsened further due to COVID-19,” the foundation said.

“And, to compound the situation, Australian athletes were largely missed by COVID-19 related income support schemes, with only 28 per cent qualifying for JobKeeper or JobSeeker.”

Natalie Cook, the five-time Olympian and Sydney Games beach volleyball gold medallist, is now working for the Queensland Government, trying to bring the Olympics to Brisbane. 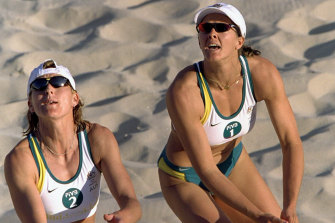 Kerry Pottharst and Natalie Cook, pictured at the Sydney Olympics, fear a Brisbane bid for the Games may be in jeopardy. Credit:Allsport

She echoed Bond’s concerns that the potential hometown heroes, who could be bringing glory to Australia in 2032, might be stopping before they even start, given the parlous financial prospects for sportsmen and women, who are not involved in the football codes or high profile activities.

“So many of our top Olympic and Paralympic athletes are living below the breadline and plenty more are giving up, which is very worrying for our prospects about 2032.”

“So many of our top Olympic and Paralympic athletes are living below the breadline and plenty more are giving up, which is very worrying for our prospects about 2032,” she said.

“It never has been easy – we [Cook and volleyball partner Kerri Pottharst] always had to hustle and always found a way – but it is getting harder. We need to find a way for corporate Australia, governments and philanthropists to get on board and help fund these athletes, who bring so much pride and enjoyment to the public.”

The Australian Sports Commission, the government agency that supports and invests in sport, was contacted for comment.