While they made short work of the first set, the Australians trailed in the second before a brilliant fightback saw them accumulate eight match points. The Latvians could save only one. 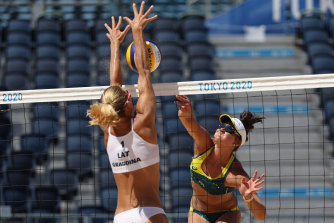 The Australians in action against Latvia on Thursday.Credit:Getty Images

Artacho del Solar and Clancy, who eliminated the Canadian top seeds in the quarter-finals, will play second-seeded Americans Alix Klineman and April Ross for gold.

Win or lose, it will be Australia’s first medal in beach volleyball since Natalie Cook and Kerri Pottharst won gold on the sands of Bondi in 2000.