The NSW Swifts playing group have been forced to give up on desires to play in front of their fans for 2020, with all finals games set to be played in Queensland.

Swifts captain Maddy Proud said her squad was hopeful in recent weeks that borders would be opened towards the end of the season to allow some games in Sydney. 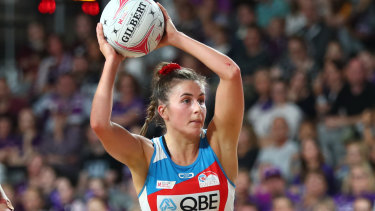 Swifts captain Maddy Proud said the team was hopeful borders would be opened towards the end of the season to allow games in Sydney. Credit:Getty

Swifts coach Briony Akle said the time away from home has been doubly difficult on her squad, with the condensed season forcing teams to play up to three times a week.

"It’s pretty crazy when you think about it, but that’s what 2020 has been for everyone," she said. "A lot of people see the front-facing side when the team have a rare day off and rightly make the most of this amazing region – but they don’t often see the extra training, team meetings, recovery and separation from loved ones that can balance your mood out."

With a small number of cases cropping up in Queensland, the playing group has now been advised by Super Netball to stay away from restaurants and cafes and to avoid crowded areas where possible.

"There are times when it gets lonely and no amount of sun can make up for missing our loved ones at home," Akle said.

The Swifts sit third on the Super Netball ladder after experiencing their first defeat of the season on the weekend, a 65-58 loss to the Sunshine Coast Lightning.

The 2019 champions will be looking to rectify their loss when they face the Lightning again on Wednesday.