NICE, France — There are less than 30 minutes before France kicks off against Norway in the teams’ second match at the Women’s World Cup, but somehow at least one fan thinks France’s Delphine Cascarino is spending those final minutes roaming the stands inside Allianz Stadium.

“It happens often,” said Estelle Cascarino, 22, laughing and smiling for a photograph while politely explaining that she is not Delphine, her twin sister and France’s speedy right wing. “She is on the field right now!”

Estelle is an accomplished professional herself — she’s a defender for Bordeaux in the French league — and has made one appearance for Les Bleues, as the French national team is known. But she did not make this year’s World Cup roster. She didn’t expect to, and so said she felt more determined than devastated.

“I know I’m young and I have time to work, and I hope that sometime we will play together in a World Cup,” she said. This year, though, Estelle will be cheering Delphine from the stands.

On Wednesday against Norway, Delphine was not in the starting lineup, replaced by the returning Valérie Gauvin. Cascarino was France’s breakout star in the under-20 World Cup in 2016, and she showed a bit of that flair in the opening game against South Korea last Friday, racing past players on the flank or cutting inside to her favored left foot. 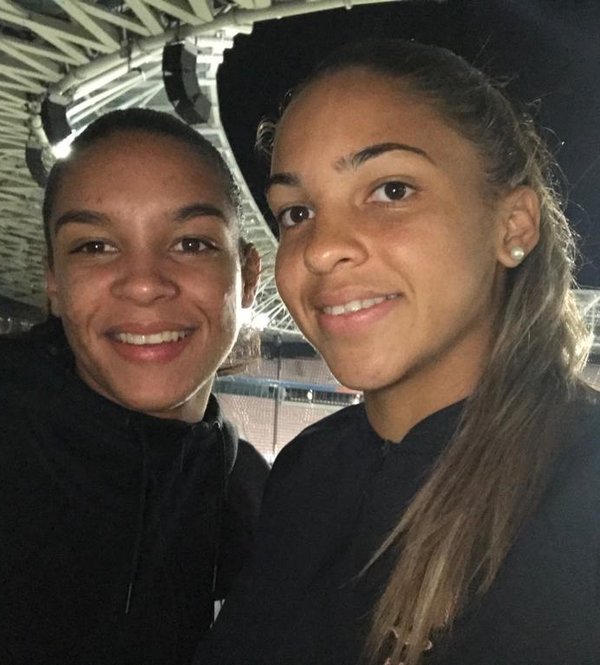 “She’s a really technical player, and she’s really fast with and without the ball,” Estelle said of what makes Delphine so good. If they can, she said, the twins speak before every game.

“I tell her, ‘Don’t always do the same thing,’ because other players watch her on video,” Estelle said of her defender’s-point-of-view advice. “So she knows that she has to play in different ways now.”

“She’s been with me literally since the very beginning and totally understands the journey I’ve been on and has shared a lot of it,” Sam Mewis said. “I really just trust her opinion.”

The Cascarinos started playing soccer when they were 9 years old, though Estelle acknowledged that it was Delphine who first expressed a desire to play, and that she followed. They grew up in Saint-Priest, a small town just outside Lyon, where Delphine now plays for the famed club Olympique Lyonnais Féminin.

During the season, they play against each other in the French league, often to one another’s detriment. “She doesn’t like to play against me because I know her better than any player,” Estelle said, laughing as she remembered a time when Delphine’s coach moved her to the opposite side to get her away from Estelle.

In the 85th minute against Norway, Delphine finally entered the match as a substitute. When the announcer called out her name, “Caaaascariiiiinooooo,” Estelle, their mother and brother already were out of their seats screaming.

“I’m really proud of her, and it’s amazing to come and see her play in the big stadiums,” she said.