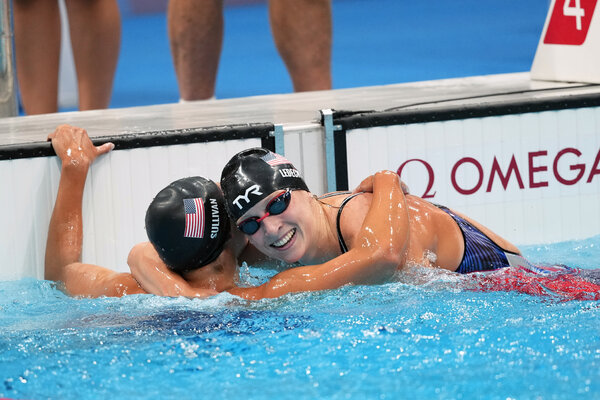 Here are some highlights of U.S. broadcast coverage on Friday evening and overnight. All times are Eastern.

BASKETBALL The U.S. women faced Japan in a preliminary-round game. NBCSN has the rebroadcast at 8 p.m.

TRACK AND FIELD Coverage of the men’s 800-meter heats, the men’s pole vault, and the women’s 400-meter and 100-meter hurdles begins at 8 p.m. on USA Network.

SWIMMING Katie Ledecky swims the 800-meter freestyle, her final event in Tokyo, where she has already collected three medals. Coverage begins at 9:30 p.m. on NBC. The network also has the men’s 100-meter butterfly and the women’s 200-meter backstroke events, among others, starting at 9:30 p.m.

RUGBY SEVENS Fans can stream the women’s quarterfinals, which include a U.S. team that cruised into the round, as well as the semifinals beginning at 8 p.m. on NBCOlympics.com.

BMX USA airs the qualifying rounds in the men’s and women’s freestyle events beginning at 11 p.m. The often dangerous cycling competition drew attention this week when Connor Fields of the United States, the defending BMX gold medalist, crashed on the first turn of a semifinal heat.