CLEVELAND — Trevor Bauer has thrown more pitches this season than any other major leaguer. Many pitches have not gone where he wanted, but this is the most fitting category for him to be leading. Bauer, the restless and relentless right-hander for the Cleveland Indians, is a pitching scientist on a crusade. His mission is not just to modernize his craft, but also to get people to celebrate — not denigrate — the direction of the game.

“More so than any other major American sport, baseball has the most diversity of culture and personality, and is the least marketable,” he said over lunch before a game here last month. “Why? It doesn’t make any sense.”

Bauer, 28, is probably doing more to advance the game, on and off the field, than any other player. He produces his own interview show with fellow major leaguers; runs a crowdsourced charity; believes in an unusual financial strategy; and yearns for the rest of the game to match his enthusiasm for the many ways data can make players better.

“He thinks a little bit differently,” said Shane Bieber, a Cleveland right-hander in his second major league season. “The game is starting to change, and he’s ahead of the curve.”

Yet in a competitive environment, Bauer might be foolish to share his secrets. He made his first All-Star team last season but has struggled this year with control and home runs. He still confounds hitters, with an opponents’ average of .195, but leads the majors in walks and hit batters, and he has already surrendered 13 homers, four more than he did last season over 67 more innings, to go with a pedestrian 3.41 earned run average.

Most ominously, perhaps, other pitchers and organizations are rapidly joining Bauer in riding the information wave washing across the sport. He gladly shares information, he said, as a way to thank the universe for his good fortune. But now the universe is catching up, and he is still sharing. 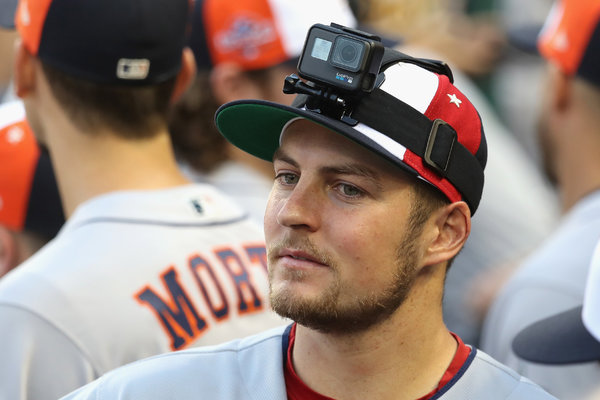 “The smartest way to accomplish my career goals is to give no information away, because, ultimately, my only advantage is my mind,” he said. “I’m probably in the bottom 25 percent of athletes in the big leagues, just on pure athletic capability. But I’ve taught myself, through a lot of hard work and study and science, how to be really good at one specific thing.

“And the worst thing that can happen for my baseball goals is that someone like Forrest Whitley comes along, who is really physically talented and also really bright and cares a lot about his career, and then he is just better than I am.”

He played chess with his physics teacher at lunch.

Whitley, 21, has barely pitched above Class AA. But at 6 foot 7 and 195 pounds, he is six inches taller than Bauer, weighs 10 pounds less and — as a prospect for the tech-savvy Houston Astros — has access to the most progressive player-development techniques in the game.

Conceivably, if the Indians fall out of the wild-card race, Bauer could soon be dealt to Houston. Or, perhaps, he could go to the Minnesota Twins, who lead the American League Central and whose chief baseball officer, Derek Falvey, is a former Cleveland executive and a student of pitching who knows Bauer well.

Regardless of where he ends up this season or beyond, the more organizations that embrace the curiosity that drives Bauer, the better chance he has to fit in. In high school in Southern California, he was too much of a jock for the nerds, and too much of a nerd for the jocks. He played chess with his physics teacher at lunch; if the game ended early, Bauer would ask for physics questions related to baseball.

Now, he spends much of his off-seasons with Kyle Boddy, the a former Microsoft software developer who founded the Driveline Baseball training facility near Seattle.

“If Trevor can give away the secrets, and if he can talk about it openly, whether it’s people inside or outside of the pro game, the environment becomes more favorable to him,” Boddy said, adding later, “Instead of it becoming a combative thing, he has allies inside the game who really want to work with him. So it makes coming to work every day a lot less bad.”

Bauer has clashed with coaches, including the former Indians pitching coach Mickey Callaway, now the Mets’ manager — Bauer calls Callaway “my overlord” in “The MVP Machine,” a new book by Ben Lindbergh and Travis Sawchik. But he has since become a coach of sorts to his fellow starters.

Bauer pointed out a problem with Bieber’s posture during a start this April, and Bieber said he thrived after correcting it. Mike Clevinger, a lanky right-hander who had 207 strikeouts in 200 innings last season, has become Bauer’s pet project.

“I joke with him about it all the time: ‘I’m, like, the athlete you’re building — you’re going to make me way better than you, and it’s going to be your fault,’” Clevinger, 28, said. “And he’s like: ‘I know, but you’re never going to be better than me.’”

Clevinger and Bauer have been in Cleveland together for three and a half seasons, but if Bauer leaves the Indians behind, he is not likely to commit to his new team for the long term. He will be eligible for free agency after the 2020 season, and while he said he wants to play 17 more years, he swears he will never sign a multiyear deal. That would make it possible for him, he says, to always be on a contending team and, he hopes, to be allowed to pitch every fourth day instead of every fifth.

“I’m not motivated by money,” he said. “It’s just about setting a new standard.”

Bauer was drafted third over all out of U.C.L.A. by the Arizona Diamondbacks in 2011 but was traded 18 months later after his biggest advocate in the organization, Jerry Dipoto, left to be the Seattle Mariners’ general manager. He still struggles to shake a label from his brief, rocky time with Arizona.

Jason Kipnis, the Indians’ veteran second baseman, is among the many players who have sat down with Bauer to do an interview for his website, Watch Momentum, which showcases the charismatic side of Bauer.

Kipnis called Bauer a “good dude,” but said his deep, almost evangelical assuredness about his methods can make him an imperfect salesman.

“Will he be right? Sure. But he doesn’t understand why he might need to just say, ‘Hey, this isn’t the battle to pick,’ or something like that.”

Kipnis also wished Bauer would not engage his detractors on social media, where many of his comments draw criticism. Bauer said he recognizes, intellectually, that he should not talk back on Twitter and elsewhere, but he would rather be authentic — even to a fault — than simply spew clichés.

Much of his online activity centers on growing the game or engaging the community, including pledging $10 per strikeout to charities selected by his followers.

Many of the organizations are lesser known but appeal to Bauer’s sensibilities. The winners of his May 30 poll were an academy for young entrepreneurs, a youth chess club in Cleveland and a group that helps provides video games for hospitalized children.

“I never would have known about Girls Who Code unless someone submitted it,” Bauer said, citing a former contest winner.

“But that’s awesome — there’s not a whole lot of female coders.”

Of course, Bauer being Bauer, even the name of his foundation is controversial. It is 69 Days of Giving, and the league’s labor relations department — working on the Indians’ behalf — ridiculed him for it during his salary arbitration hearing last winter.

Bauer started this year’s campaign with a donation of $69,420.69 to support robotics and STEM programs at a high school in Cleveland. The sexual and marijuana connotations of the figure have a very simple purpose.

‘Let’s talk about how nasty the pitching is.’

Bauer has essentially taken it upon himself to market the sport. He is dismayed by the many former players criticizing the current game on broadcasts: belittling analytics while bemoaning the rise in strikeouts, homers and infield shifts as well as the decline in singles, bunts and stolen bases.

“For every negative on the field, there’s a positive, an alternative way of talking about it,” Bauer said. “So if someone’s striking out 200 times a year, maybe it’s because the pitching is just so good. So let’s talk about how nasty the pitching is, and how the pitchers this day and age are the best we’ve ever seen in the history of baseball.”

He continued: “I would love to see vintage Pete Rose in today’s game. He would get absolutely annihilated. Guys that are striking out 200 times, like Joey Gallo — in 1990 he would have hit 75 home runs every year because he’s facing guys with an average velocity of 90 miles an hour, good command and O.K. breaking balls.”

Strikeout and home run rates have never been higher in the majors, and walk rates are at a 10-year peak. To Bauer, those three so-called true outcomes indicate that the game is better than it has ever been — and held to a different standard from basketball and football.

“The N.B.A. is true outcomes: Either dunk the ball or shoot a 3, and that’s the direction it’s going,” he said. “The N.F.L. is more true-outcome based, as well: throwing high-percentage passes. So other sports are going this way, but they’ve found a way to make it popular.”

He is vehement that players should celebrate as enthusiastically as they want and sounds exhausted that such an issue persists. After Tim Anderson of the Chicago White Sox ignited a brawl with the Royals by flipping his bat after a home run in April, Bauer offered support to Anderson on social media.

Here is the worst place a pioneer can be. Bauer wants to take the game there, in a hurry, even if he loses his edge along the way.