Andrey Rublev of Russia is familiar with his eponym, the 15th-century artist responsible for the Trinity icon. The two Rublevs have something in common — they have created masterpieces.

Though just 23, Rublev has risen from outside the world’s Top 20 last January to a career-high No. 7 heading into the French Open, which starts Sunday with the main draw and runs through June 13. Despite the curtailed season in 2020, he won an ATP Tour-leading five titles. Since the beginning of last year he has won 70 singles matches, more than anyone else on tour.

Rublev won a tournament in Rotterdam, the Netherlands, in March, where he beat the former No. 1 Andy Murray and the Australian Open semifinalist Stefanos Tsitsipas; reached three semifinals, including at the Miami Open; and upset Rafael Nadal en route to the final in Monte Carlo. He also reached the quarterfinals at the Australian Open, and he and Daniil Medvedev led Russia to the World Team Cup in February.

Armed with a monstrous forehand that he can place anywhere on the court and a work ethic that makes many other players look lazy, Rublev has also beaten Roger Federer and Dominic Thiem, last year’s United States Open champion. He won the Roland Garros junior championship in 2014, and last year reached the quarterfinals of the main draw before losing to Tsitsipas.

The following conversation has been edited and condensed.

What do you know about the artist Andrei Rublev?

I know that he was one of the greatest painters in churches. I have the most famous icon in my home. They call it the greatest trio. We keep it in a religious corner. Sometimes you put a little light to make it special.

You won the Junior Championship at the French Open when you were just 16, but it took another six years for you to win a main draw match there. What happened?

My level was not good enough in general. I needed to raise my game to compete against great players. And then when I became Top 30 in the world I was injured and not able to play Roland Garros for two years. Only last year was I able to play. 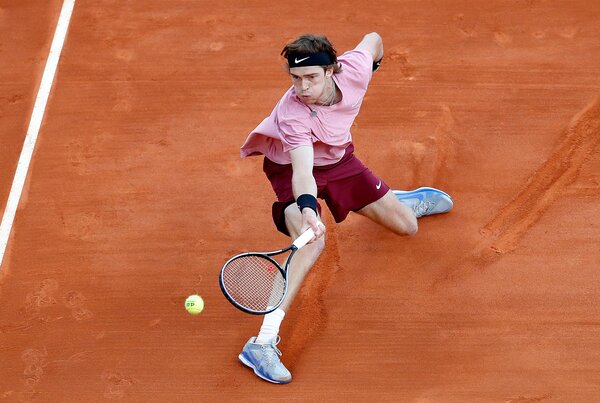 A lot of players have said that you work harder than anybody else on tour and that you’ve been doing that ever since you were a child. Is that true?

I don’t know, to be honest. Everything is personal. Maybe for another player the things that I’m doing is not going to fit. Maybe he will start to feel much worse or say, “I don’t want to do this anymore.” In my case it’s just the way I was in the beginning, and it makes me comfortable. I don’t know any other way.

As a child, you threw a lot of temper tantrums on court. Did you really eat red clay from the court?

I never ate it full, but, yes, I put it in my mouth. I just spat it away or took water to clean my mouth. I did some stupid things, for sure.

You also slept with your racket as a child?

Yes, a couple of times.

Tennis can be a lonely sport, especially during the pandemic when you are allowed to go only from the hotel to the courts and back.

Yes, but it depends on which side you see it. I’ve been lonely, but I’m also a bit lucky because I have so many people around me for support, and we’re looking at things the same way. They give me a lot of energy. When I’m playing, I feel that they’re with me, and it helps a lot.

You have had unusually solid results against top-10 players. You don’t fear them the way others do?

I am afraid. And I’m OK to say it. When I go on the court, of course I’m afraid, especially against some Top-10 players. But I accept this. I’m not going to say I don’t feel tension. I’m very open. I’m human, and I feel tight sometimes. But, in the end, I want to win, and I’m going to do my best to do that.