Will Archambault and Max Paulhus Gosselin certainly are not the first N.B.A. broadcast commentators to marvel at the play of Stephen Curry. As analysts for R.D.S., essentially a smaller, French version of ESPN based in Canada, they have called Curry’s last two N.B.A. finals runs together from a studio in Montreal.

But this pair of finals commentators has a particular insight into Curry’s basketball skills, having seen them up close. How many broadcasting duos can say they practiced with and against Curry for years?

Before he figured in debates about the best shooters of all time, Curry went to Davidson College in North Carolina, where he played for three seasons. He burst onto the national scene carrying the underdog program to the regional finals in the 2008 N.C.A.A. tournament. Two of Curry’s teammates during that run, Archambault and Gosselin, also are along for the ride now as Curry tries for a third straight N.B.A. championship.

Except this time they are in the TV booth, and they are unsure whom to root for: their former college teammate or the Toronto Raptors, on the verge of winning their first N.B.A. title and pushing Canadian interest in basketball to its peak.

[Read how the Toronto area is churning out basketball players.]

Few saw Curry the way these two did in their four seasons at Davidson. After leaving college — Archambault in 2010 and Gosselin in 2009 — the Quebec natives were approached by R.D.S. in 2013 to analyze N.C.A.A. games. Eventually, as the Warriors began their dominance, R.D.S. asked them to shift to the N.B.A.

“It’s a great opportunity because one comes from the other,” Gosselin said in a phone interview. “The fact that we had the success we had in college was greatly generated by Steph’s unbelievable talent. He’s generating more fantastic opportunities for Will and I.” 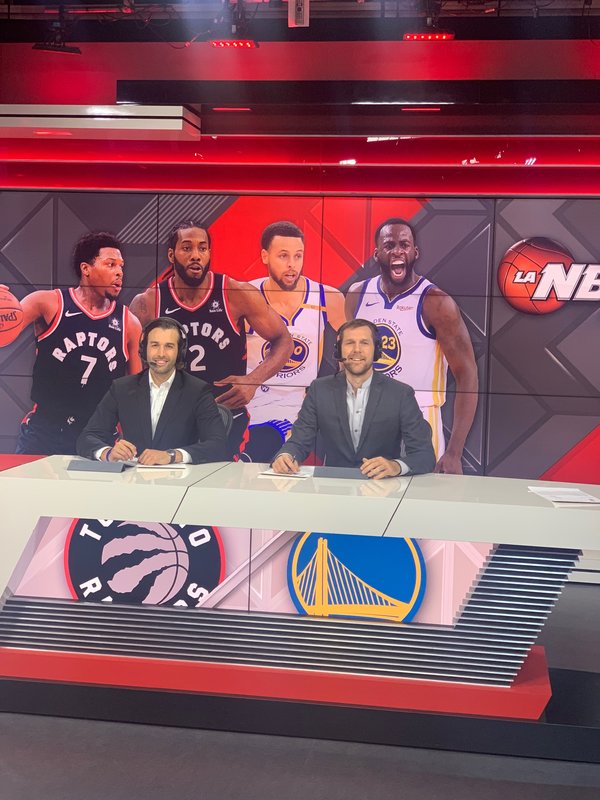 At Davidson, Gosselin and Archambault said, Curry’s talent was apparent behind the scenes.

“I was more of a defensive stopper, so I spent a lot of practice time against Steph one on one,” Gosselin, who was a guard, said. “So I realized that independently of my willpower and my ability to defend, he always had the upper hand. I knew he was good.

“Obviously, I knew that Steph was going to be a great basketball player and a great shooter,” he said. “I wouldn’t have expected to see his rise as meteoric as it was in the N.B.A.”

Curry set the N.C.A.A. Division I record for 3-pointers with 162 in 36 games during the 2008 season. Even then, basketball was different. The confines of what constituted smart basketball changed in large part because of Curry’s exceptional shooting ability, which he developed at Davidson.

“He did change the game. He obviously ruined it,” Archambault said with a laugh. He added: “Back in college, he didn’t shoot as many off-balance threes because Coach Bob McKillop used to have a pretty tight leash on everyone. Obviously, Steph’s leash was a little bit looser than anybody else’s, but he wanted us to shoot within the system. Now, Steph has developed his shooting abilities to the max.”

Neither of Curry’s former teammates is a full-time broadcaster. Archambault, 32, is a commercial banker for the Business Development Bank of Canada; Gosselin, 33, is a family business consultant, finishing his M.B.A. on weekends at Sherbrooke University. They call games once a week.

They lead what many would call regular day-to-day lives, in that they don’t often get recognized on the street. When they interacted with Curry daily, he was in a much different place in life, more in line with what Archambault and Gosselin experience today.

“Regular things don’t happen to Steph anymore,” Gosselin said. “He can’t go to the movies and hang out. He can’t just live life the way Will and I do.” He continued: “We all evolved and transformed in some shape or form. His transformation is quite astronomical.”

In November, Archambault, Gosselin and some friends in Montreal traveled to Toronto to see the Warriors play the Raptors in person. After the game, the group waited for hours to talk to Curry, who occasionally keeps in touch with his former Davidson teammates. Some of Archambault and Gosselin’s friends wondered if Curry was ever going to come.

“Steph eventually shows up, and he’s like, ‘All right, we’re going out,’ ” much to the group’s surprise and delight, Gosselin said.

They had a couple of beers and played Ping-Pong at a basement bar in downtown Toronto where the staff set up a private room for Curry’s group. They stayed until about 2 a.m. At the end of the night, there were about 100 people lined up on each side of the door of the bar to get autographs, Gosselin said.

“It was pretty funny. We had a good time together just being young men. And all of a sudden, we get back to reality where people are constantly waiting for Steph to address their need for fandom,” Gosselin said.

Archambault and Gosselin, for this finals series, are calling the games through a different prism. They’re not just looking out for Curry’s exceptional play anymore.

The stakes are higher now, given the Raptors’ success, and what that could mean for Montreal, their broadcasting home. If Toronto dispatches Curry and the Warriors, it would solidify basketball in the region, meaning more potential exposure for the duo. R.D.S. ratings have surged during the finals.

“Toronto has been a basketball city for a little bit, yes, but you have a lot of hockey and it’s been that way and it’ll always be that way,” Gosselin said, adding, “But now Toronto’s success transpires into Montreal, and that’s really exciting for us.”