Last August, as the N.B.A. began its 2020 postseason in the confined bubble of Walt Disney World in Florida, the coronavirus pandemic raged, a vaccine was nothing but a dream and the battle for racial justice stood firmly at the forefront of every game.

That was then, and this is now: The playoffs are back, but this time set against a much different backdrop. Vaccines have softened the pandemic’s blow, allowing America to reopen and N.B.A. fans to attend games in numbers that, while still limited, would have shocked last summer.

Black Lives Matter slogans are not painted on the courts or stitched on jerseys. Players no longer lock arms and kneel during the playing of the national anthem.

Last year’s N.B.A. postseason reflected the tension, tenor and tone of society. The league’s players, 75 percent of whom are Black, sparked a movement that spread to other sports when they boycotted games to protest the shooting of Jacob Blake by a white police officer in Kenosha, Wis. These days, as the 2021 playoffs get off the ground, shootings continue without such stoppages.

The tinderbox days of the bubble seem like forever ago.

This postseason is more about moving forward and sloughing off, however tentatively, the raw pain of the last year. It’s about welcoming new possibilities. It’s about basketball, the pure sport and entertainment of it.

And so far, after the first few days of action, it can’t get much better.

It began with the so-called play-in tournament, an innovation first tried in the Florida bubble, which gives the league’s middle-of-the-pack teams a shot at making the playoffs.

The tournament, held last week, gave us Jayson Tatum leading his Boston Celtics over the Washington Wizards, sinking every shot imaginable as he went for a cool 50 points.

It gave us another unforgettable duel between the two players and two teams that have defined basketball in the 21st century. That the defending champion Los Angeles Lakers and the Golden State Warriors struggled through injury-filled seasons hardly mattered. Wednesday’s matchup was LeBron James against Steph Curry in a game with real meaning — even if it wasn’t the N.B.A. finals, where they met four times before.

It ended like poetry, with James squaring his shoulders, setting his feet and nailing a 34-foot jumper with seconds on the shot clock and less than a minute left in the game. That he did so over the outstretched arms of Curry, his longtime nemesis, added to the moment’s indelible heft.

Friday night, reeling from the heartbreak loss to the Lakers, there was Curry again, only this time his Warriors were playing on their home court, in their still new arena in downtown San Francisco. Roughly 7,500 fans were on hand, the largest, most boisterous crowd at Chase Center this season. 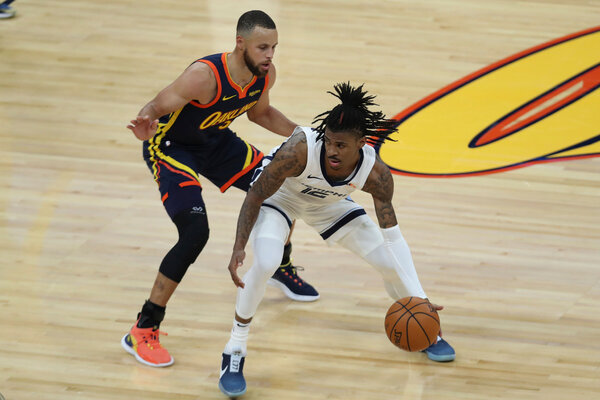 And this time, they played against the league’s youngest team, the Memphis Grizzlies, with everything on the line. The winner would advance to the playoffs. The loser, to vacation.

Curry claims to be 33. Maybe he’s fooling us. Coming off an M.V.P.-caliber regular season in which he led a hobbled, patchwork team to the league’s most improved record, he barely took a breather. True, there were signs of fatigue. His slow walk during breaks in action. The occasional slump of his shoulders. The slight hint of bewilderment in his face as he endured another night of battering from swarming defenders.

And yet he scored 39 points and willed his team from a 17-point deficit to force an overtime.

The narrative, so said almost every pundit, would belong to Curry and the Warriors in the end. Ja Morant had other ideas. Memphis’s 21-year-old, catlike point guard outdueled Curry. Normally underwhelming from long range, Morant made five of his 10 3-point attempts. And when it counted most, in the last two minutes of overtime, he showed why he is one of the brightest young stars in the league, ready to emerge from the shadow of Zion Williamson, who was taken one spot ahead of Morant in the 2019 N.B.A. draft. Morant finessed his way past the Warriors’ defense in the last gasps of overtime and sank a pair of deft push shots to seal a Memphis win, 117-112.

Many lament that Curry, global icon, will not be a part of a playoff run. Many still grouse about the play-in tournament, claiming it is unfair or that it cheapens the regular season. Remember when James said, seemingly only partly in jest, that the N.B.A. official who drew up the tournament should be fired? Considering the feast the games provided as an appetizer to the main course — and, of course, the high television ratings — the criticism seems silly now.

Sure, we don’t have Curry and the Warriors in the playoffs, but what fun is sport without surprises and novelty? What would the N.B.A. be without the steady emergence of fresh talent like Morant and his cast of young Grizzlies teammates, who now must prove themselves anew in their first-round playoff series against the Utah Jazz, holders of the league’s best record, which began Sunday night?

Last year, the N.B.A. reflected the mood of our society. Angered, standing up in the face of worry and fear.

But if our sports are to be a mirror, they must also mirror our hope and joy and celebrate new genius.

That’s what we’re seeing now: an N.B.A. still wary about the troubles of the past year but ready to do what it does best. Ready, as the playoffs of 2021 get underway, to put on a show.