Emma McKeon was out of the blocks early in Tokyo, 4am to be precise. She looked down at her phone, saw the obscene hour, then quickly realised there was no going back to sleep given what awaited her at the Olympic pool just before midday on Friday.

She was in a hurry to get there and her mind was already racing, even if her body had to wait to get in on the act. Once in the water, she was in an even bigger rush to get to the end of 100m of freestyle that had been a lifetime in the making for a water baby whose family has chlorine coursing through its veins. 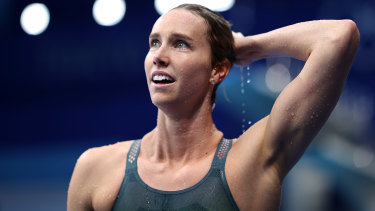 Emma McKeon after winning gold in the 100m freestyle.Credit:Getty

A softly-spoken introvert who never seeks the spotlight, the labels applied to McKeon since she first joined the national team in 2013 have always tended towards the pragmatic; reliable, consistent, the perfect team swimmer, a dependable relay campaigner.

Now she can add one more to the list: Olympic champion. Nobody really deserves a gold medal more than anyone else but there wouldn’t be a soul in Australian swimming who didn’t think McKeon has earned this 1000 times over.

The 27-year-old has been a prolific medal winner for her country. Prior to her second Games in Tokyo, McKeon had collected 17 medals across four World Championships and was Australia’s best-performed Olympian in Rio de Janiero, stashing four medals into her bag for the return flight.

But not once was she able to stand on top of the podium by herself. McKeon is a Commonwealth Games champion but this was her first individual victory at a world or Olympic level. When the results flashed up on the big screen at the Tokyo Aquatic Centre, she could scarcely believe her eyes. 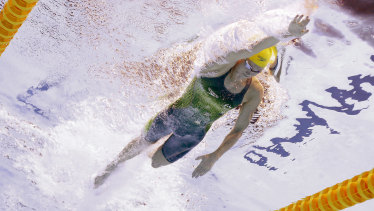 Her time was worthy of attention, because it was the second fastest in history (51.96), a new Olympic record in the fastest Olympic final the event had ever witnessed. The final’s top five times would have won gold at every other Games, one of them being Cate Campbell, whose 52.52 was good enough for bronze, a medal that completed a remarkable comeback from a difficult showing in 2016.

But the day belonged to McKeon. It looked as if that would be the case all year as she laid down brilliant times in the lead-up events in Australia and positioned herself above Campbell, for so long the standard bearer, as the nation’s premier freestyle sprinter.

In the media seats, champion swimmer Rob Woodhouse, a dual Olympian who also happens to be McKeon’s uncle, was a bundle of nerves. But halfway through the race, with McKeon turning in front, he knew the race was only going to end one way.

“She had been pacing up and down since four o’clock this morning. You just want them to get the best out of themselves. She’s just delighted,” Woodhouse, who is covering the swimming for radio station SEN, said.

“I was really nervous. I was calm this morning until when they came out. But when she turned, I knew she had it. She was well in control. It’s nice to be able to enjoy the moment, I was bawling my eyes out afterwards.

“She deserves everything that will come her way, all the accolades. She’s a really quiet and reserved young woman, so there are a few things she probably won’t like that much, but she will take it in her stride. She has amazing friends and family around her. The satisfaction she will get from that will last a lifetime.”

McKeon grew up in the water, which is hardly a surprise given her family pedigree. Father Ron was a two-time Olympian and four-time Commonwealth champion and her mother Susie a 1982 Commonwealth Games representative.

Her older brother David swam at the London and Rio Games but spent half of Friday pacing up and down the backyard in the family home in Wollongong. He told The Sydney Morning Herald and The Age that the family couldn’t be prouder of her performance in Tokyo and the solo accolade was long overdue.

“Emma has always been one to let the swimming do the talking. She never puts herself out there now and she let it do the talking in Tokyo for sure,” David said.

“It’s a family thing for us for a couple of generations. She’s always around the water and now she’s done what me and dad didn’t do and has won Olympic gold.”

There will be more medals to come for McKeon, who still has the 50m freestyle and a pair of medley relays to round out her program. She can still become the first Australian in history to win seven at a single Games.

Never miss a medal or great sporting moment with our Olympic update emailed daily. Sign up for our Sport newsletter here.