When two teams scuffle on the field before the game even starts and both head coaches appear to still be at odds after the final whistle, it is pretty clear the contest was something more than just another regular-season N.F.L. game. Indeed, when the Tennessee Titans defeated the Baltimore Ravens, 30-24, in overtime Sunday, the outcome was a weighty, emotional lift for the struggling Titans and their sledgehammer running back, Derrick Henry, who delivered the final gut punch to the reeling Ravens.

One team left the field buoyant, the other rattled and questioning itself.

It was a rematch of the A.F.C. divisional round playoff game from January, when Tennessee upset Baltimore to end the Ravens’ run as a top Super Bowl contender. In the wake of Sunday’s loss, it is not a stretch to say the Ravens, who now have a 6-4 record, have yet to recover from that playoff defeat. Adding to Baltimore’s letdown was the stunning climax to Sunday’s defeat: Henry ran over several members of the Ravens’ vaunted defense on his way to an authoritative, 29-yard touchdown that left the Titans celebrating in the Baltimore end zone.

For the Titans (7-3), Sunday’s come-from-behind victory righted, at least temporarily, a season that began with a 5-0 start and was followed by three losses in the next four games. In that period, the Titans had 24 members of their organization, including multiple players, test positive for the coronavirus, which resulted in two postponed games and $350,000 in fines from the N.F.L. for violating virus protocols.

“We said this all week: We have to start doing things that will break us away from the pack,” Titans Coach Mike Vrabel said. “Today was a great team win. Thankful to be their football coach.”

Asked if the victory re-established Tennessee, which lost to the Kansas City Chiefs in last season’s A.F.C. championship game, as a gritty contender in a conference with several high-performing teams, Vrabel said: “I think so. I hope so. I know that the players believe that and can see that.”

The Ravens, losers in three of their four games after an October bye week, were wondering what had gone wrong after a 5-1 start to the season.

“We just can’t put 60 minutes together as a team,” said defensive end Derek Wolfe, who noted that the Ravens led, 21-10, midway through the third quarter. “We’ve just got to play better in the fourth quarter.”

Baltimore’s mantra during last week’s preparation was “just finish,” a bit of motivation that did not improve the team’s sluggish fourth-quarter play Sunday. Things will not get any easier for Baltimore. They will soon travel to Pittsburgh for a Thanksgiving Day game against the Steelers, who beat the Ravens, 28-24, in Baltimore earlier this month.

Before kickoff on Sunday, Titans cornerback Malcolm Butler stood at midfield on the Ravens’ logo at M&T Bank Stadium — along with most of his teammates — and shouted at the Baltimore sideline. Ravens Coach John Harbaugh walked out to confront Butler, and a jumble of players from both teams gathered as Harbaugh and Vrabel jawed at each other through face masks mandated by the league during the coronavirus pandemic. 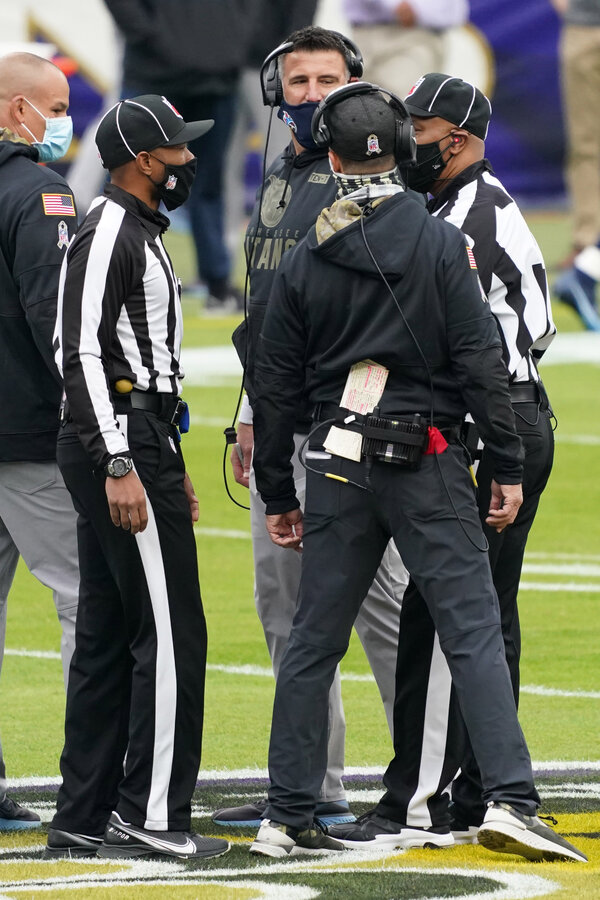 After the game, Vrabel at first celebrated with some of his players, then approached Harbaugh, who seemed to rebuff Vrabel’s attempt at a handshake or traditional postgame salutation. Television replays of the scene showed a brief interchange on the field and did not reveal the coaches shaking hands, although Vrabel denied afterward that Harbaugh had declined to do so.

“No, absolutely not,” Vrabel said. “I have a lot of respect for John. We shook hands.”

Meeting with reporters after the game, Harbaugh lamented his team’s late-game collapse.

“We didn’t tackle very well at the end of the game — that’s the difference in the game,” he said.

The game-winning run by Henry was no doubt fresh on Harbaugh’s mind. With the Titans appearing ready to set up an overtime field-goal attempt by Stephen Gostkowski, Henry, who was held to 44 rushing yards in the first three quarters, ran off left tackle and broke two arm tackles at a crowded line of scrimmage. He then took a jump step to his right and outsprinted the remaining Ravens to the end zone.

“He’s the best running back in the league,” said Wolfe, who grasped at Henry’s lower legs on the clinching touchdown run. “That’s what he does.”

Vrabel said he had sensed that his team was ready to finish off the Ravens, who won the coin toss after the fourth quarter and had the first possession of overtime, but punted after three fruitless plays.

“You could tell as the game went on that we were wearing on them,” Vrabel said. “It was tough sledding at first today, but looking at their body language on the sideline and on the field, I thought we were going to be able to break through.”

Though the Titans took a 7-0 lead on their opening drive, the Ravens chipped away with two Justin Tucker field goals and stormed ahead, 14-7, on a 2-yard touchdown run by J.K. Dobbins and a successful 2-point conversion. A precise, deft 31-yard touchdown pass from Baltimore quarterback Lamar Jackson to tight end Mark Andrews seemed to have the Ravens well positioned, but they did not score another touchdown in the game, despite three other drives inside the Tennessee 20-yard line.

In the closing moments of the fourth quarter, Baltimore advanced to the Titans’ 10-yard line, but two Jackson passes fell incomplete and Tucker sent the game to overtime with a 29-yard field goal. Jackson, who has spent most of this season trying to recapture the magic and production of the 2019 season, when he won the N.F.L.’s Most Valuable Player Award, completed 17 of 29 passes for only 186 yards with one interception to complement his one touchdown pass.

His counterpart for Tennessee, Ryan Tannehill, completed 22 of 31 passes for 259 yards with two touchdowns and an interception.

Asked about the Ravens’ struggles near the Titans’ goal line, Harbaugh shrugged and said, “We’re just not getting it done.” His response was similar when asked how his team could regain its momentum toward a playoff berth.

“I don’t know, we just have to win as many games as we can,” Harbaugh said.