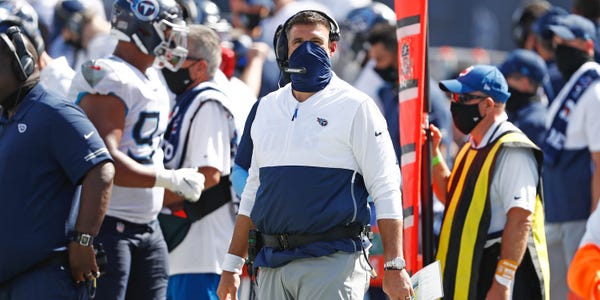 The Titans' Week 4 game vs. the Pittsburgh Steelers was postponed because of the positive tests.

Although the team's practice facility has been closed, NFL reporter Paul Kuharsky reported on Wednesday that several Titans players held private workouts together last week, despite the NFL telling the team not to gather. The NFL and NFLPA are reportedly investigating protocol violations, including the Titans' private workout.

With the Titans' Week 5 game against the Buffalo Bills now in danger, the NFL league office and its players are furious over the team's apparent recklessness.

Pro Football Talk's Mike Florio reported on Wednesday that there is "buzz" of an "historic" punishment for the Titans for violating NFL protocols.

Yahoo's Charles Robinson reported that one league source said it's "not a matter of if, but when and how severe" the punishment is.

Sports Illustrated's Albert Breer reported on Wednesday that during a meeting with head coaches and GMs, the NFL showed examples of violations of protocols, including members of the Titans not wearing masks inside their facilities.

One general manager told Robinson: "I absolutely hope [offending] teams are hit hard, especially if they are just outright disregarding things. If you're blatantly ignoring what you're supposed to be doing, you deserve to get hit hard."

Some have suggested that if the Titans cannot play their Week 5 game, they should be forced to forfeit and handed a loss.

The Titans may also be fined and docked future draft picks.

The problem with a forfeit or rescheduling

NFL.com's Judy Battista reported that as of Wednesday, a forfeit and loss hadn't been discussed for the Titans. However, ESPN's Ed Werder noted that the league warned teams that there may be competitive penalties for violations.

As ESPN's Chris Mortensen noted, there are problems with a forfeiture, including whether the Bills would get paid.

As Florio noted on Thursday, the NFL and NFLPA agreed before the start of the season that the league could withhold player pay in the event of a cancellation or suspension, but it does not include a forfeiture.

A forfeiture could also cause a ripple effect, like CBS asking for a refund for not getting to broadcast a game that it paid for.

ESPN's Dianna Russini reported that the NFL is considering moving Titans against the Bills to Monday or Tuesday. If they do, then they also would have to move the Week 6 game between the Bills and Kansas City Chiefs, scheduled for Thursday, October 15, to Saturday 17.

The domino effect is easy to see, and the schedule changes will only become more complicated with further positive tests, unless the NFL creates a Week 18 or even 19 to play lost games.

As Battista reported, it's a "mess that's created a lot of anger around the league."