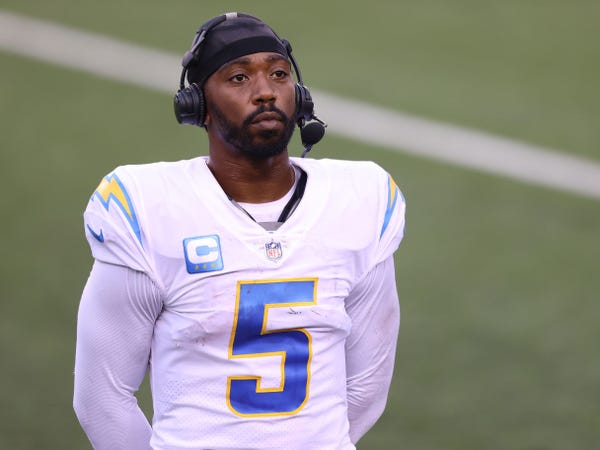 Los Angeles Chargers starting quarterback Tyrod Taylor had his lung accidentally punctured by team doctors just before kickoff of Sunday's game against the Kansas City Chiefs, resulting in a trip to the hospital, according to a report from ESPN's Adam Schefter.

According to Schefter, team doctors were administering a pain-killing injection for Taylor to treat his cracked ribs when things went awry. The result was Taylor's sudden disappearance from the sidelines and the first career start of rookie quarterback Justin Herbert.

After the game, which the Chargers lost in overtime, head coach Anthony Lynn told reporters he was still trying to figure out Taylor's status, having been informed only minutes before the game that his starting quarterback was unavailable.

"It was something that developed late, and it kind of caught us all off guard," Lynn said of Taylor's absence. Asked if he knew the cause of the injury, Lynn said, "I don't right now. I didn't find out anything until right after the coin toss."

On Monday, reports came out that Taylor had suffered "complications from a pregame injection," resulting in him being pulled from the game.

In his post-game press conference, Lynn said that despite Herbert's strong performance, Taylor would still be the team's starter if he was ready to go in Week 3.

According to Schefter, doctors have advised that Taylor sit out "indefinitely" due to his punctured lung. The Chargers are scheduled to face the Carolina Panthers this Sunday.

The Chargers did not immediately respond to a request for comment.