‘These hockey players are rock hard’: Team GB star Sarah Robertson CRASHES into India’s post and dislodges the goal before brushing it off and winning the bronze medal

Great Britain’s hockey hero Sarah Robertson proved how ‘rock hard’ she is after brushing off a heavy collision with the goalposts before playing on to help them win the bronze medal.

With the scores level at 3-3 following a goal-laden second quarter, Great Britain were in the ascendency and were threatening to take a third-quarter lead as Elena Rayer and Co mounted an attack.

Robertson, 27, who was high up the pitch with Rayer, made a run into the opposition circle in the hope of tapping the ball into the goal. 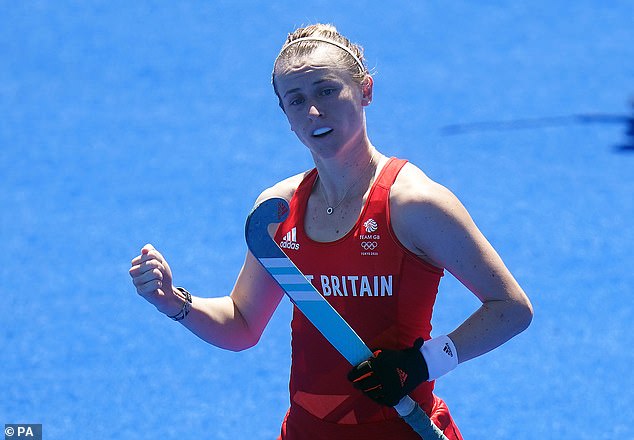 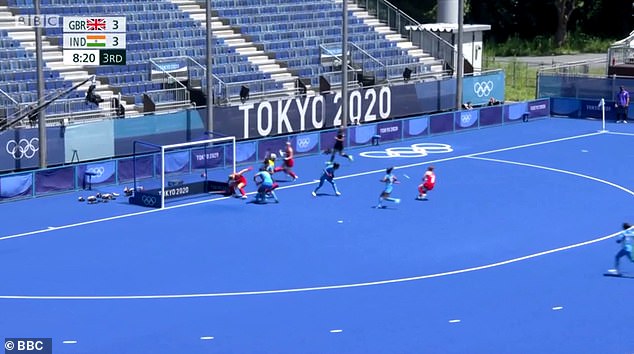 The Scottish midfielder (centre, left) lost her footing before colliding with the post 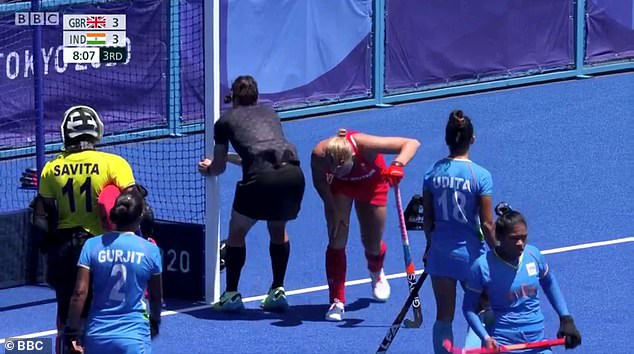 The nasty collision managed to dislodge the goal, with Robertson able to recover from the fall

However, with a number of players swarming on the India goal, Robertson lost her footing and crashed into the goalpost – leaving her in a heap on the ground.

The heavy collision managed to dislodged the goal from its position, which eventually lead to the match official to stop play to check on the Scottish midfielder.

But without a moment’s notice, Robertson stood up, brushed herself down and carried on with play, leaving BBC commentator Matt Chilton in awe at her toughness.

‘Oh goodness me! Sarah Robertson crashed into the post. The goal needs to be put back into posisiton!’ Chilton cried. 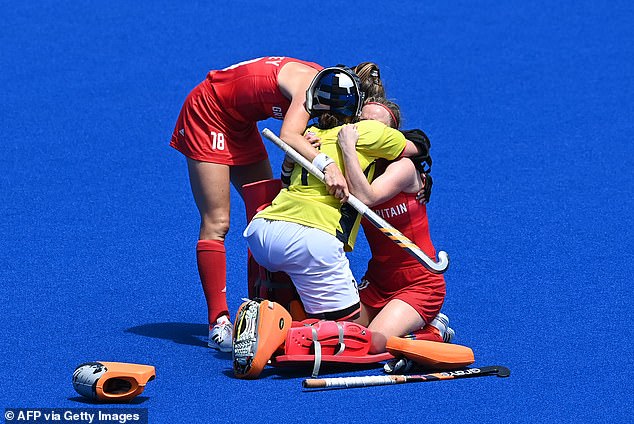 Robertson, who scored in the 4-3 win, played a crucial role in Team GB winning bronze

‘Heavy collision – Robertson just brushing it off. These hockey players are rock hard.’

Robertson had already scored Team GB’s second goal with a superb finish before going on to play a crucial role in securing the bronze medal.

After a scoreless first quarter, Britain needed less than a minute of the second quarter to deservedly go ahead.

Rayer opened the scoring after she left the Indian defence floundering with a surging run, and she was awarded the goal, despite her cross being heavily deflected past India’s goalkeeper.

Ansley then hit the post as Britain continued to impress, and they went 2-0 up following a brilliant turn and shot by Robertson.

Goalkeeper Maddie Hinch made a sharp reflex save following a rare India attack, but the deficit was then reduced after Kaur struck from a penalty corner, before she repeated the feat two minutes later, making it 2-2. 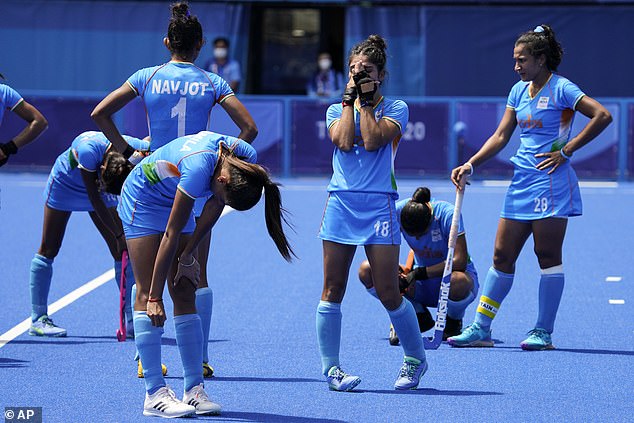 Remarkably, India added a third goal in four minutes through Katayira. It went to a video referral before being allowed to stand, and Britain suddenly had a huge fight on their hands, trailing 3-2 at half-time.

Britain needed to regroup after such a demoralising end to the second quarter, and they responded impressively, establishing a strong platform before Pearne-Webb hit a powerful shot into the corner of India’s net.

Two more penalty corners put the reigning Olympic champions under pressure, though, and Hinch made a fine save as a thrilling encounter continued at stamina-sapping pace, tied 3-3 entering the final quarter.

Then Balsdon struck, Britain kept their composure, and India could find no way back as the bronze medal was secured following an epic encounter.