Laurel Hubbard’s inclusion in the New Zealand team for the Tokyo Olympics has been met with encouragement and diplomacy from Australia’s weightlifters, who say she is simply another competitor regardless of the debate about her eligibility.

Hubbard will be the first transgender athlete to compete at an Olympic Games, with the 43-year-old selected to compete in the +87kg category in Tokyo, which begins on July 23. Hubbard was a talented junior lifter but quit the sport in her early 20s before returning to it in 2013, by which time she publicly identified as a woman. 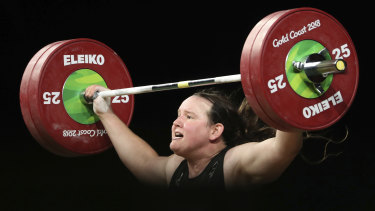 New Zealand’s Laurel Hubbard will compete at the Tokyo Olympics.Credit:AP

This is not the first time Hubbard’s inclusion in a major competition has caused some debate. Fellow lifters like Belgiam’s Anna Vanbellinghen, who competes in the same weight class, said that if Hubbard were to lift in Tokyo it would be “like a bad joke”.

After Hubbard took home two gold medals from the Pacific Games in 2019, its chairman Loau Solamalemalo Keneti Sio claimed Hubbard had an inherently unfair advantage, despite her producing negligible testosterone since her transition began in 2012.

“They have allowed New Zealand transgender weightlifter Laurel Hubbard to lift in the women’s category and there is nothing we can do about it,” Loau said. “We all know that it is not fair to the women lifters but that is a reality we face in the world of sports.”

Charisma Amoe-Tarrant was one of five Australian lifters unveiled for Tokyo on Tuesday and like Vanbellinghen is a direct competitor in the same category. She said there was nothing but respect for Hubbard as an athlete and a person and she wished her well, as she did every athlete at the disrupted Games.

“I have so much respect for her … I wish her and all the other lifters the best. I hope we can all come together and enjoy the Olympics. This Olympics is quite different, I just wish her well,” Amoe-Tarrant said. “I’ve competed with her, I’ve always had some good chats with her.”

Hubbard is eligible for Tokyo under the International Olympic Commitee’s guidelines from 2015, which stipulate that male-to-female transitional athletes can compete without surgical removal of their testes if their testosterone levels remain under a strict limit.

That rule is followed by the International Weightlifting Federation, with veteran officials like Australia’s Sam Coffa strongly backing Hubbard’s inclusion while saying more work and research must be done, especially in power sports.

Swimming great Susie O’Neill, a deputy chef de mission for the Australian team in Tokyo, said if Hubbard was able to compete under the IOC rules, most athletes would accept the judge’s call.

Australia’s team for Tokyo will be the biggest since Sydney 2000, with Erika Yamasaki (59kg), Kiana Elliott (64kg), Brandon Wakeling (73kg) and Matthew Lydement (+109kg) joining Amoe-Tarrant. All are making their Olympic debuts.

Sports news, results and expert commentary. Sign up for our Sport newsletter.